Tel Aviv University archaeologists have revealed that cloth samples found in the Israeli desert present the earliest evidence of plant-based textile dyeing in the region. They were found at a large-scale copper smelting site and a nearby temple in the copper ore district of Timna in Israel's Arava desert and are estimated to date from the 13th-10th centuries BCE.

The discovery provides insight into society and copper production in the Timna region at the time of David and Solomon, Tel Aviv University researchers say.

The wool and linen pieces shed light on a sophisticated textile industry and reveal details about a deeply hierarchical society dependent on long-distance trade to support its infrastructure in the unforgiving desert.

This is a dyed textile at Timna. 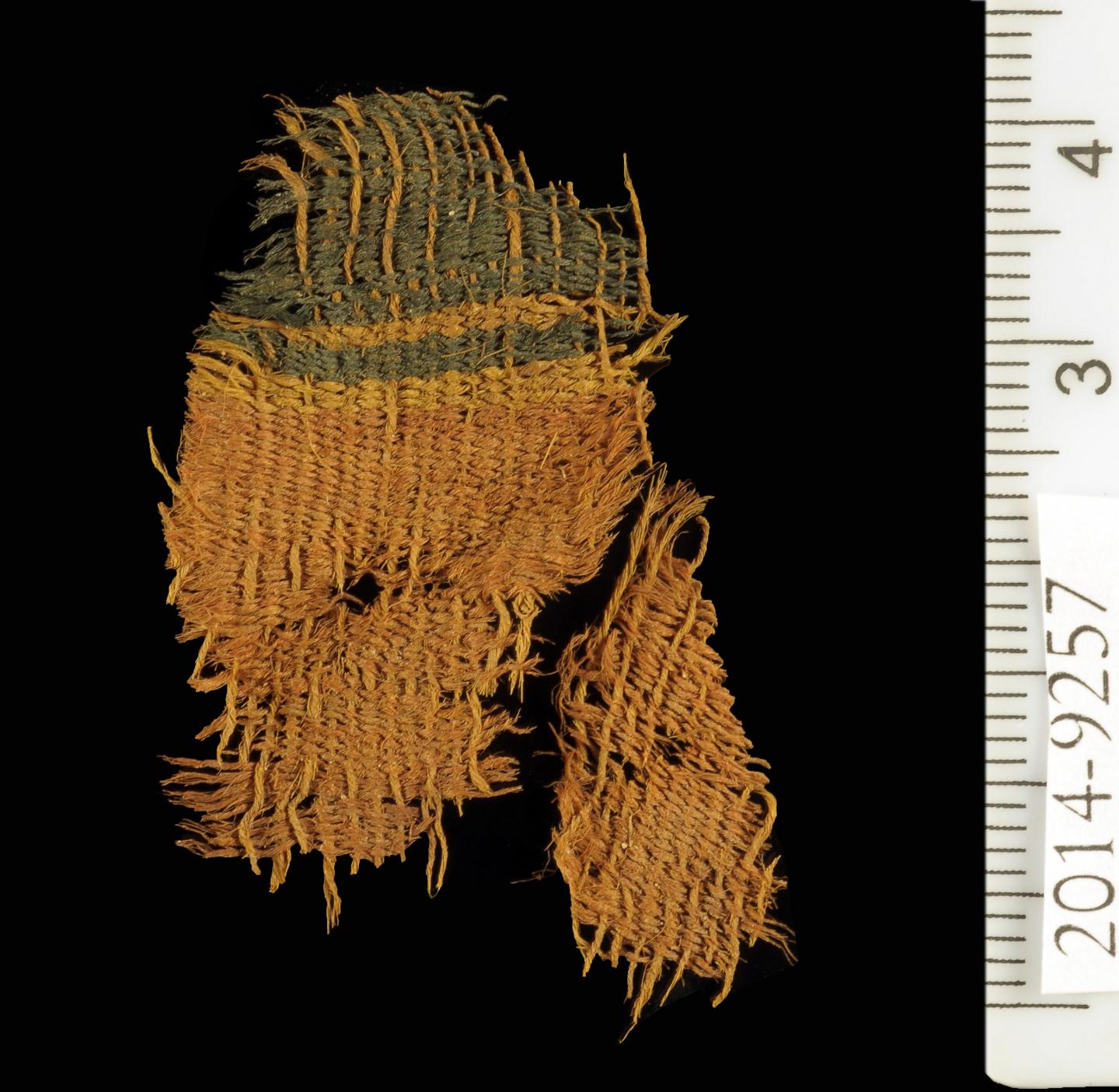 The study was published in PLOS ONE. It was led by Dr. Erez Ben-Yosef of TAU's Department of Archaeology and Near Eastern Cultures and Dr. Naama Sukenik of the Israel Antiquities Authority; and conducted in collaboration with Vanessa Workman of TAU's Department of Archaeology, Dr. Orit Shamir of the Israel Antiquities Authority and Dr. Zohar Amar, Dr. Alexander Varvak and Dr. David Iluz of Bar-Ilan University.

"This was clearly a formative period, with local kingdoms emerging and replacing Egyptian hegemony in Canaan," Dr. Ben-Yosef said. "These beautiful masterpieces of weaving and dyeing -- the first evidence of industrial dyeing at the time, of wash-resistant color on textile -- support the idea of a strong, hierarchical Edomite Kingdom in Timna at the time.

"It is apparent that there was a dominant elite in this society that took pains to dress according to their 'class,' and had the means to engage in long-distance trade to transport these textiles -- and other materials and resources -- to the desert."

The research suggests a sophisticated dyeing process involving cooking colorful plants in water, then adding fleece fixed with alum to create a chemical bond between fabrics and dye. The result is a wash-resistant colorful fabric.

The researchers radiocarbon-dated the textile pieces and harnessed gas chromatography to identify the cloth's organic molecules. They found "red" molecules produced from the madder plant and "blue" molecules from the woad plant.

"Both plants were known in antiquity as sources of organic dyes," said Dr. Ben-Yosef. "We know that these plants were used to create elaborate costumes during the Roman period, more than a thousand years later. Now we have evidence in the region of an Edomite society wearing textiles produced the same way, versus an earlier 'primitive' smearing of color on fabric."

"We can make many inferences according to this discovery," Dr. Ben-Yosef continued. "To force a large group of people to work in dangerous mines in the desert, you need a strong ruling party -- an elite that probably wore exquisite clothes to further distinguish themselves. The smelters, working in furnaces, were considered 'magicians' or even priests, and they probably wore fine clothing too. They represented the highest level of society, managing a sensitive and complex process to produce copper from rock."

The textile dye presents evidence of long-distance trade, Dr. Ben-Yosef noted. "Clearly this is not local. These plants require a lot of water and probably hail from the Mediterranean regions. The dyeing required special craftspeople, an entire industry that could not have subsisted in the desert. If Jerusalem was indeed opulent in the time of King Solomon, and the Temple covered in copper, we can assume a link to that kingdom."

The textiles are currently being stored in special facilities at the Israel Antiquities Authority and will one day be presented in museums in Israel and elsewhere.