Pointing the National Science Foundation’s Very Large Array (VLA) at a famous galaxy for the first time in two decades, a team of astronomers got a big surprise, finding that a bright new object had appeared near the galaxy’s core. The object, the scientists concluded, is either a very rare type of supernova explosion or, more likely, an outburst from a second supermassive black hole closely orbiting the galaxy’s primary, central supermassive black hole.

The astronomers observed Cygnus A, a well-known and often-studied galaxy discovered by radio-astronomy pioneer Grote Reber in 1939. The radio discovery was matched to a visible-light image in 1951, and the galaxy, some 800 million light-years from Earth, was an early target of the VLA after its completion in the early 1980s. 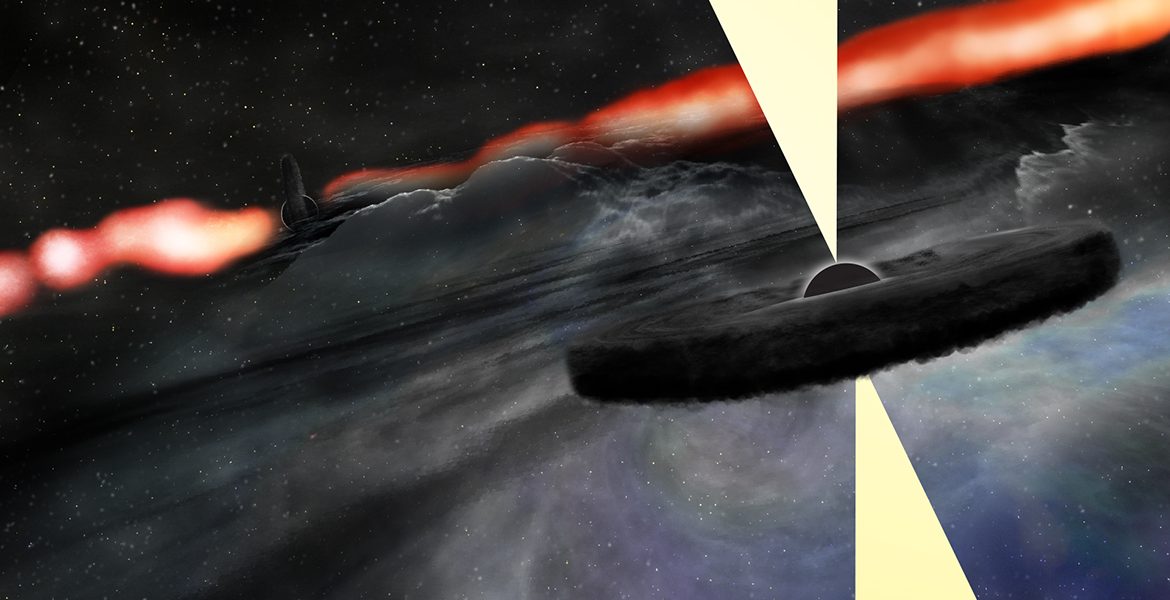 Detailed images from the VLA published in 1984 produced major advances in scientists’ understanding of the superfast “jets” of subatomic particles propelled into intergalactic space by the gravitational energy of supermassive black holes at the cores of galaxies.

“This new object may have much to tell us about the history of this galaxy,” said Daniel Perley, of the Astrophysics Research Institute of Liverpool John Moores University in the U.K., lead author of a paper in the Astrophysical Journal announcing the discovery.

“The VLA images of Cygnus A from the 1980s marked the state of the observational capability at that time,” said Rick Perley, of the National Radio Astronomy Observatory (NRAO). “Because of that, we didn’t look at Cygnus A again until 1996, when new VLA electronics had provided a new range of radio frequencies for our observations.” The new object does not appear in the images made then.

“However, the VLA’s upgrade that was completed in 2012 made it a much more powerful telescope, so we wanted to have a look at Cygnus A using the VLA’s new capabilities,” Perley said.

Daniel and Rick Perley, along with Vivek Dhawan, and Chris Carilli, both of NRAO, began the new observations in 2015, and continued them in 2016.

“To our surprise, we found a prominent new feature near the galaxy’s nucleus that did not appear in any previous published images. This new feature is bright enough that we definitely would have seen it in the earlier images if nothing had changed,” said Rick Perley. “That means it must have turned on sometime between 1996 and now,” he added.

The scientists then observed Cygnus A with the Very Long Baseline Array (VLBA) in November of 2016, clearly detecting the new object. A faint infrared object also is seen at the same location in Hubble Space Telescope and Keck observations, originally made between 1994 and 2002. The infrared astronomers, from Lawrence Livermore National Laboratory, had attributed the object to a dense group of stars, but the dramatic radio brightening is forcing a new analysis.

VLA radio images (orange) of central region of Cygnus A, overlaid on Hubble Space Telescope image, from 1989 and 2015. Animated GIF.

What is the new object? Based on its characteristics, the astronomers concluded it must be either a supernova explosion or an outburst from a second supermassive black hole near the galaxy’s center. While they want to watch the object’s future behavior to make sure, they pointed out that the object has remained too bright for too long to be consistent with any known type of supernova.

“Because of this extraordinary brightness, we consider the supernova explanation unlikely,” Dhawan said.

1989 VLA radio image of the central region of Cygnus A. 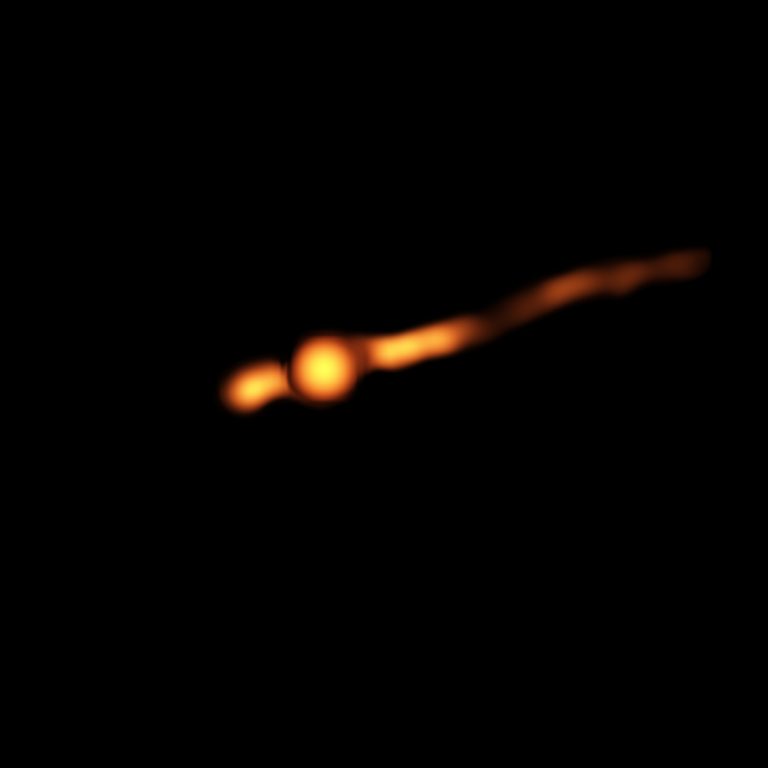 The astronomers suggested that the second black hole has become visible to the VLA in recent years because it has encountered a new source of material to devour. That material, they said, could either be gas disrupted by the galaxies’ merger or a star that passed close enough to the secondary black hole to be shredded by its powerful gravity.

“Further observations will help us resolve some of these questions. In addition, if this is a secondary black hole, we may be able to find others in similar galaxies,” Daniel Perley said.

Rick Perley was one of the astronomers who made the original Cygnus A observations with the VLA in the 1980s. Daniel Perley is his son, now also a research astronomer.

“Daniel was only two years old when I first observed Cygnus A with the VLA,” Rick said. As a high school student in Socorro, New Mexico, Daniel used VLA data for an award-winning science fair project that took him to the international level of competition, then went on to earn a doctoral degree in astronomy.

2015 VLA radio image of the central region of Cygnus A. 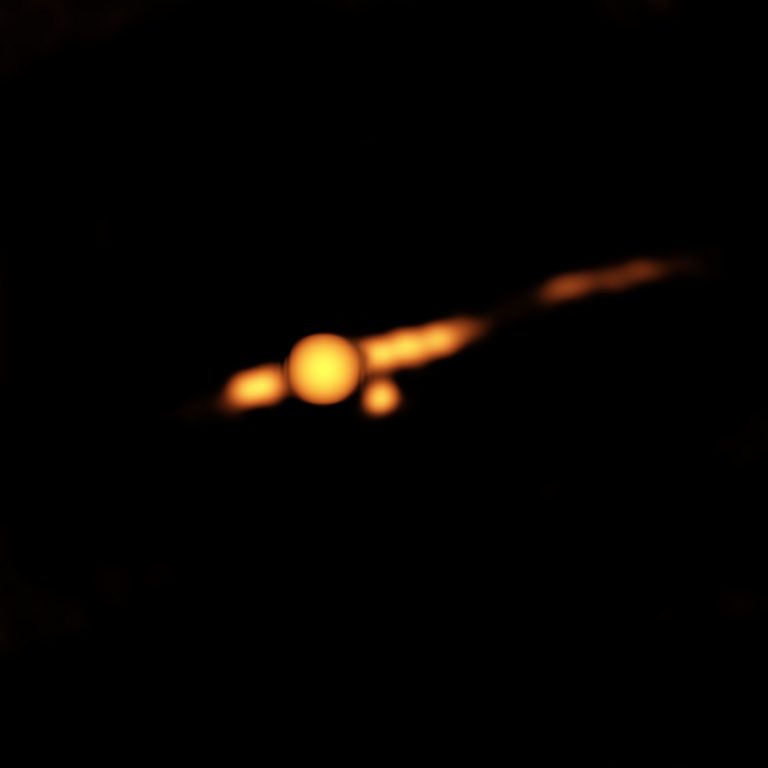 
Also at the time of those first VLA observations of Cygnus A, Carilli and Dhawan were office mates as graduate students at MIT.

Carilli, now NRAO’s Chief Scientist, was Rick’s graduate student while working as a predoctoral fellow at NRAO. His doctoral dissertation was on detailed analysis of 1980s VLA images of Cygnus A.


Contacts and sources:
Dave Finley
The National Radio Astronomy Observatory
on May 23, 2017