Spanish ecologists have observed an unusual way in which the goats may be benefiting the trees: the goats spit the trees' seeds. Miguel Delibes, Irene Castañeda, and José M Fedriani reported their discovery in the latest Natural History Note in the May issue of the Ecological Society of America's journal Frontiers in Ecology and the Environment. The paper is open access.

Goats graze on an argan tree in southwestern Morocco. In the fruiting season, many clean argan nuts are spat out by the goats while chewing their cud. 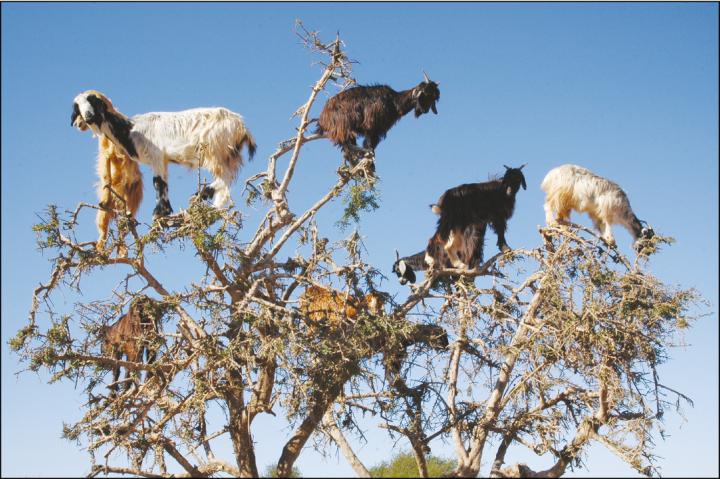 Argan may be familiar from popular beauty products that feature argan oil, made from the tree's nuts. The nut is surrounded by a pulpy fruit that looks a bit like a giant green olive. For goats, the fruits are a tasty treat worth climbing up to 30 feet into the branches to obtain.

But the goats don't like the large seeds. Like cows, sheep, and deer, goats re-chew their food after fermenting it for a while in a specialized stomach. While ruminating over their cud, the goats spit out the argan nuts, delivering clean seeds to new ground, wherever the goat has wandered. Gaining some distance from the parent tree gives the seedling a better chance of survival.

This novel seed dispersal effect is a variation on the mechanism ecologists call endozoochory, in which seeds more commonly pass all the way through the animal's digestive system and out the other end (or sometimes through two digestive systems). The authors suspected that reports of goats dispersing argan seeds by this more common mechanism were mistaken, because goats do not usually poop large seeds.

The researchers have witnessed sheep, captive red deer, and fallow deer spitting seeds while chewing their cud, and suspect this spitting variation on endozoochory may actually be common - and perhaps an essential route of seed spread for some plant species.


Contacts and sources:
Liza Lester
The Ecological Society of America