Sea Level Serves as a Metronome of Earth's History

Sedimentary layers record the history of the Earth. They contain stratigraphic cycles and patterns that precisely reveal the succession of climatic and tectonic conditions that have occurred over millennia, thereby enhancing our ability to understand and predict the evolution of our planet.

Researchers at the University of Geneva (UNIGE), Switzerland, -- together with colleagues at the University of Lausanne (UNIL) and American and Spanish scientists -- have been working on an analytical method that combines observing deep-water sedimentary strata and measuring in them the isotopic ratio between heavy and light carbon.

This is a view of the Mediano anticline, strata dipping to the left into the lake waters. This large-scale fold structure is a witness of ancient deformation associated with the rise of the Pyrenees in the middle Eocene, 45 Million years ago. Excellent exposure of rocks in this dry area allow today's geologists to study the epic poem of the Earth written in its sedimentary archives. 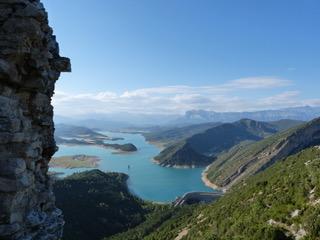 They have discovered that the cycles that punctuate these sedimentary successions are not, as one might think, due solely to the erosion of mountains that surround the basin, but are more ascribable to sea level changes. This research, which you can read in the journal Geology, paves the way for new uses of isotopic methods in exploration geology.

The area south of the Pyrenees is particularly suitable for studying sedimentary layers. Rocks are exposed over large distances, allowing researchers to undertake direct observation. Turbidites can be seen here: large sediment deposits formed in the past by underwater avalanches consisting of sand and gravel. "We noticed that these turbidites returned periodically, about every million years. We then wondered what the reasons for this cyclicity were", explains Sébastien Castelltort, professor in the department of earth sciences in UNIGE's faculty of sciences.

The ups and downs of oceans regulate sedimentation cycles

The geologists focused their attention on Eocene sedimentary rocks (about 50 million years ago), which was particularly hot, and undertook the isotopic profiling of the sedimentary layers. "We took a sample every 10 metres," says Louis Honegger, a researcher at UNIGE, "measuring the ratio between 13C (heavy carbon stable isotope) and 12C (light carbon stable isotope). The ratio between the two tells us about the amount of organic matter, the main consumer of 12C, which is greater when the sea level is high.

The variations in the ratio helped us explore the possible link with the sea level". The research team found that the turbidite-rich intervals were associated with high 12C levels, and almost always corresponded to periods when the sea level was low. It seems that sedimentary cycles are mainly caused by the rise and fall of the sea level and not by the episodic growth of mountains.

When the sea level is high, continental margins are flooded under a layer of shallow water. Since the rivers are no longer able to flow, they begin to deposit the sediments they carry there. This is why so little material reaches the deep basins downstream.

When the sea level is low, however, rivers erode their beds to lower the elevation of their mouth; they transfer their sediment directly to the continental slopes of the deep basins, creating an avalanche of sand and gravel. Consequently, if the variations of the sea level are known, it is possible to predict the presence of large sedimentary accumulations created by turbidites, which often contain large volumes of hydrocarbons, one of the holy grails of exploration geology.

The research provides a new role for the use of carbon isotopes. "From now on, continues Castelltort, we know that by calculating the ratio between 13C and 12C sampled in similar slope deposits close to continents, we can have an indication of the sea level, which means it's possible to better predict the distribution of sedimentary rocks in our subsurface".

In addition, this measurement is relatively simple to perform and it provides accurate data -- a real asset for science and mining companies. The study also highlights the importance of sea levels, which are a real metronome for the Earth's sedimentary history. "Of course," concludes Honegger, "tectonic deformation and erosion are important factors in the formation of sedimentary layers; but they play a secondary role in the formation of turbidite accumulations, which are mainly linked to changes in the sea level".

Contacts and sources:
Sébastien Castelltort
University of Geneva (UNIGE)
on May 19, 2017