The U.S. Nuclear Regulatory Commission (NRC) relied on faulty analysis to justify its refusal to adopt a critical measure for protecting Americans from the occurrence of a catastrophic nuclear-waste fire at any one of dozens of reactor sites around the country, according to an article in the May 26 issue of Science magazine. Fallout from such a fire could be considerably larger than the radioactive emissions from the 2011 Fukushima accident in Japan.

This image captures the spread of radioactivity from a hypothetical fire in a high-density spent-fuel pool at the Peach Bottom Nuclear Power Plant in Pennsylvania. Based on the guidance from the US Environmental Protection Agency and the experience from the Chernobyl and Fukushima accidents, populations in the red and orange areas would have to be relocated for many years, and many in the yellow area would relocate voluntarily. In this scenario, which is based on real weather patterns that occurred in July 2015, four major cities would be contaminated (New York City, Philadelphia, Baltimore and Washington, D.C.), resulting in the displacement of millions of people. 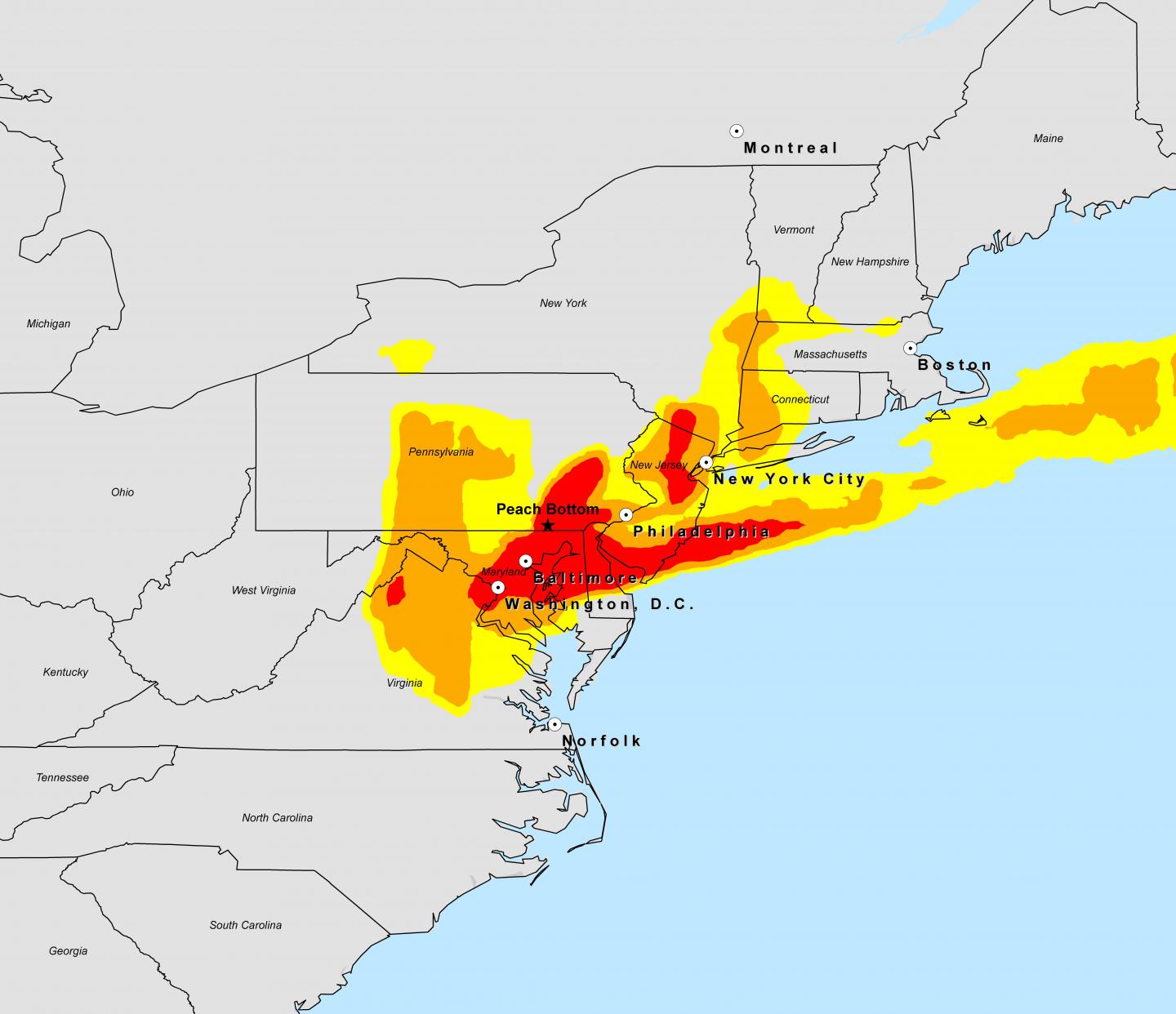 
Published by researchers from Princeton University and the Union of Concerned Scientists, the article argues that NRC inaction leaves the public at high risk from fires in spent-nuclear-fuel cooling pools at reactor sites. The pools -- water-filled basins that store and cool used radioactive fuel rods -- are so densely packed with nuclear waste that a fire could release enough radioactive material to contaminate an area twice the size of New Jersey. On average, radioactivity from such an accident could force approximately 8 million people to relocate and result in $2 trillion in damages.

These catastrophic consequences, which could be triggered by a large earthquake or a terrorist attack, could be largely avoided by regulatory measures that the NRC refuses to implement. Using a biased regulatory analysis, the agency excluded the possibility of an act of terrorism as well as the potential for damage from a fire beyond 50 miles of a plant. Failing to account for these and other factors led the NRC to significantly underestimate the destruction such a disaster could cause.

"The NRC has been pressured by the nuclear industry, directly and through Congress, to low-ball the potential consequences of a fire because of concerns that increased costs could result in shutting down more nuclear power plants," said paper co-author Frank von Hippel, a senior research physicist at Princeton's Program on Science and Global Security (SGS), based at the Woodrow Wilson School of Public and International Affairs. "Unfortunately, if there is no public outcry about this dangerous situation, the NRC will continue to bend to the industry's wishes."

Von Hippel's co-authors are Michael Schoeppner, a former postdoctoral researcher at Princeton's SGS, and Edwin Lyman, a senior scientist at the Union of Concerned Scientists.

Spent-fuel pools were brought into the spotlight following the March 2011 nuclear disaster in Fukushima, Japan. A 9.0-magnitude earthquake caused a tsunami that struck the Fukushima Daiichi nuclear power plant, disabling the electrical systems necessary for cooling the reactor cores. This led to core meltdowns at three of the six reactors at the facility, hydrogen explosions, and a release of radioactive material.

"The Fukushima accident could have been a hundred times worse had there been a loss of the water covering the spent fuel in pools associated with each reactor," von Hippel said. "That almost happened at Fukushima in Unit 4."

In the aftermath of the Fukushima disaster, the NRC considered proposals for new safety requirements at U.S. plants. One was a measure prohibiting plant owners from densely packing spent-fuel pools, requiring them to expedite transfer of all spent fuel that has cooled in pools for at least five years to dry storage casks, which are inherently safer. Densely packed pools are highly vulnerable to catching fire and releasing huge amounts of radioactive material into the atmosphere.

The NRC analysis found that a fire in a spent-fuel pool at an average nuclear reactor site would cause $125 billion in damages, while expedited transfer of spent fuel to dry casks could reduce radioactive releases from pool fires by 99 percent. However, the agency decided the possibility of such a fire is so unlikely that it could not justify requiring plant owners to pay the estimated cost of $50 million per pool.

The NRC cost-benefit analysis assumed there would be no consequences from radioactive contamination beyond 50 miles from a fire. It also assumed that all contaminated areas could be effectively cleaned up within a year. Both of these assumptions are inconsistent with experience after the Chernobyl and Fukushima accidents.

In two previous articles, von Hippel and Schoeppner released figures that correct for these and other errors and omissions. They found that millions of residents in surrounding communities would have to relocate for years, resulting in total damages of $2 trillion -- nearly 20 times the NRC's result. Considering the nuclear industry is only legally liable for $13.6 billion, thanks to the Price Anderson Act of 1957, U.S. taxpayers would have to cover the remaining costs.

The authors point out that if the NRC does not take action to reduce this danger, Congress has the authority to fix the problem. Moreover, the authors suggest that states that provide subsidies to uneconomical nuclear reactors within their borders could also play a constructive role by making those subsidies available only for plants that agreed to carry out expedited transfer of spent fuel.

"In far too many instances, the NRC has used flawed analysis to justify inaction, leaving millions of Americans at risk of a radiological release that could contaminate their homes and destroy their livelihoods," said Lyman. "It is time for the NRC to employ sound science and common-sense policy judgments in its decision-making process."

The paper, "Nuclear safety regulation in the post-Fukushima era," was published May 26 in Science. For more information, see von Hippel and Schoeppner's previous papers, "Reducing the Danger from Fires in Spent Fuel Pools" and "Economic Losses From a Fire in a Dense-Packed U.S. Spent Fuel Pool," which were published in Science & Global Security in 2016 and 2017 respectively. The Science article builds upon the findings of a Congressionally-mandated review by the National Academy of Sciences, on which von Hippel served.

Contacts and sources:
B. Rose Kelly
Princeton University, Woodrow Wilson School of Public and International Affairs
on May 26, 2017