New Approach to Revolutionize the Production of Molecular Hydrogen

Growing concern about the energy crisis and the seriousness of environmental contamination urgently demand the development of renewable energy sources as feasible alternatives to diminishing fossil fuels.

Owing to its high energy density and environmentally friendly characteristics, molecular hydrogen is an attractive and promising energy carrier to meet future global energy demands. In many of the approaches for hydrogen production, the electrocatalytic hydrogen evolution reaction (HER) from water splitting is the most economical and effective route for the future hydrogen economy. 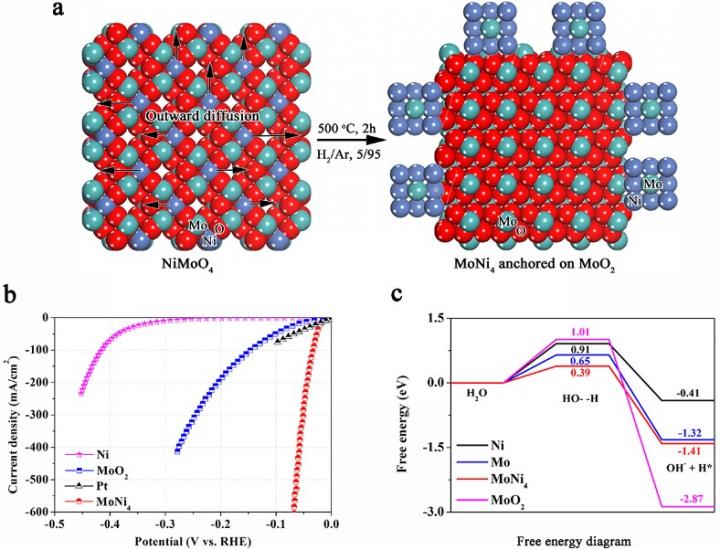 To accelerate the sluggish HER kinetics, particularly in alkaline electrolytes, highly active and durable electrocatalysts are essential to lower the kinetic HER overpotential. As a benchmark HER electrocatalyst with a zero HER overpotential, the precious metal platinum (Pt) plays a dominant role in present H2-production technologies, such as water-alkali electrolysers. Unfortunately, the scarcity and high cost of Pt seriously impede its large-scale applications in electrocatalytic HERs.

MoNi4 nanoparticles are constructed in situ on the MoO2 cuboids by controlling the outward diffusion of Ni atoms. The resultant MoNi4/MoO2@Ni exhibits a high HER activity that is highly comparable to that of the Pt catalyst and presents state-of-the-art HER activity amongst all reported Pt-free electrocatalysts. Experimental investigations reveal that the MoNi4 electrocatalyst behaves as the highly active centre and manifests fast Tafel step-determined HER kinetics.

Furthermore, density functional theory (DFT) calculations determine that the kinetic energy barrier of the Volmer step for the MoNi4 electrocatalyst is greatly decreased. The large-scale preparation and excellent catalytic stability provide MoNi4/MoO2@Ni with a promising utilization in water-alkali electrolysers for hydrogen production. Therefore, the exploration and understanding of the MoNi4 electrocatalyst provide a promising alternative to Pt catalysts for emerging applications in energy generation.

This work was financially supported by the ERC Grant on 2DMATER and EC under Graphene Flagship (No. CNECT-ICT-604391).