Beekeepers across the United States lost 33 percent of their honey bee colonies during the year spanning April 2016 to April 2017, according to the latest preliminary results of an annual nationwide survey. Rates of both winter loss and summer loss—and consequently, total annual losses—improved compared with recent years.

“While it is encouraging that losses are lower than in the past, I would stop short of calling this ‘good’ news,” said Dennis vanEngelsdorp, an assistant professor of entomology at the University of Maryland and project director for the Bee Informed Partnership. “Colony loss of more than 30 percent over the entire year
is high. It’s hard to imagine any other agricultural sector being able to stay in business with such consistently high losses.”

This summary chart shows the results of an 11-year annual survey that tracks honey bee colony losses in the United States, spanning 2006-2017. 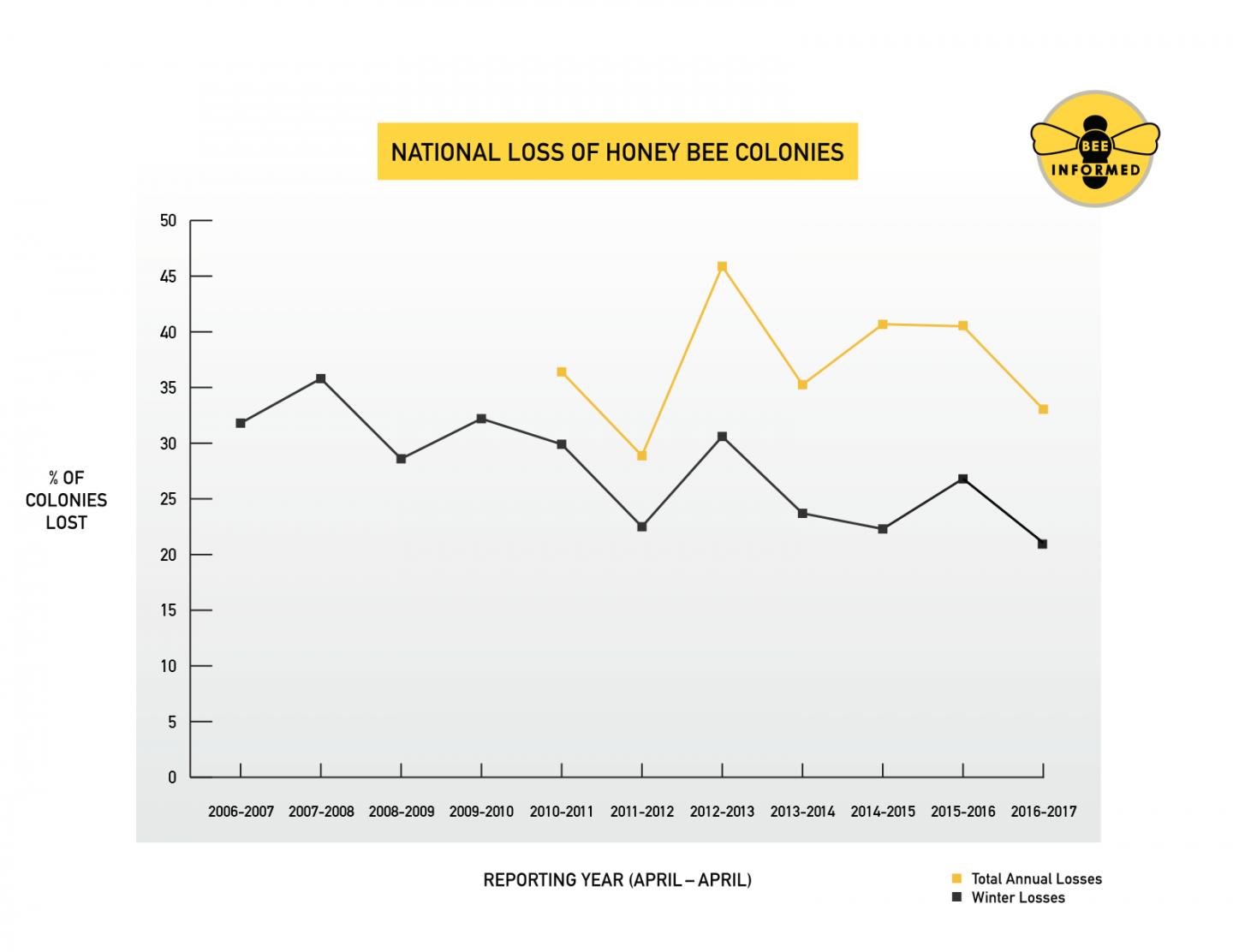 The survey, which is conducted each year by the nonprofit Bee Informed Partnership in collaboration with the Apiary Inspectors of America, found total annual losses in 2016-17 were the lowest since 2011-12, when the survey recorded less than 29 percent of colonies lost throughout the year. Winter losses last year were the lowest recorded since the survey began in 2006-07.

According to vanEngelsdorp, the primary reason for the drop in colony loss appears to be that efforts by beekeepers to control varroa mite infestations were more successful during the past year. Among the many different factors that contribute to colony losses, the lethal varroa mite parasite is considered to be at the top of the list.

In the fall months of 2016, varroa mite levels across the country were noticeably lower in most beekeeping operations compared with past years. The researchers said this is likely due to increased vigilance on the part of beekeepers, a greater availability of mite control products and environmental conditions that favored the use of timely and effective mite control measures. For example, some mite control products contain essential oils that break down at high temperatures, but many parts of the country experienced relatively mild temperatures in the spring and early summer of 2016.

Beekeepers who responded to the 2015-16 survey lost a total of 33.2 percent of their colonies over the course of the year. This marks a decrease of 7.3 percentage points over the previous study year (2015-16), when loss rates were found to be 40.5 percent. Winter loss rates decreased from 26.9 percent in the previous winter to 21.1 percent this past winter, while summer loss rates decreased from 23.6 percent to 18.1 percent.

The survey asks both commercial and small-scale beekeepers to track the survival rates of their honey bee colonies. Survey results for this year and all previous years are publicly available on the Bee Informed website.

“This is a complex problem,” said Kelly Kulhanek, a graduate student in the UMD Department of Entomology who helped with the survey. “Lower losses are a great start, but it’s important to remember that 33 percent is still much higher than beekeepers deem acceptable. There is still much work to do.”

In addition to the varroa mite, factors contributing to colony losses include other parasites, such as the gut parasite Nosema, and viral and bacterial diseases. Poor nutrition (due in part to loss of natural foraging habitat) and pesticide exposure also take a toll, especially among commercial beekeepers. These and other stressors are likely to synergize with each other to compound the problem, the researchers said.

This is the 11th year of the winter loss survey, and the seventh year to include summer and annual losses. More than 4,900 beekeepers from all 50 states and the District of Columbia responded to this year’s survey. All told, these beekeepers manage about 13 percent of the nation’s estimated 2.78 million honey bee colonies.

The survey is part of a larger research effort to understand why honey bee colonies are in such poor health, and what can be done to manage the situation. Some crops, such as almonds, depend entirely on honey bees for pollination. Honey bees pollinate an estimated $15 billion worth of crops in the U.S. annually.

“Bees are good indicators of the health of the landscape as a whole,” said Nathalie Steinhauer, a graduate student in the UMD Department of Entomology who leads the data collection efforts for the annual survey. “Honey bees are strongly affected by the quality of their environment, including flower diversity, contaminants and pests. To keep healthy bees, you need a good environment and you need your neighbors to keep healthy bees. Honey bee health is a community matter.”


Contacts and sources:
Matthew Wright
University of Maryland
on May 27, 2017