Interactive Touchscreen for Dolphins Created, They Play Games Like Whack-a-Mole with Training

Dolphins are highly intelligent and social animals, but can they use a smartphone built just for them? Yes, scientists have discovered—they can even play games like Whack-a-Mole with little training.

Researchers at Rockefeller University and Hunter College, working with the National Aquarium in Baltimore, MD, have developed a touchpad for dolphins, the first of its kind, using optical technology. The system, essentially an underwater computer touchscreen through which dolphins are able to interact and make choices, will be used to investigate dolphin intelligence and communication by providing them choice and control over a number of activities. 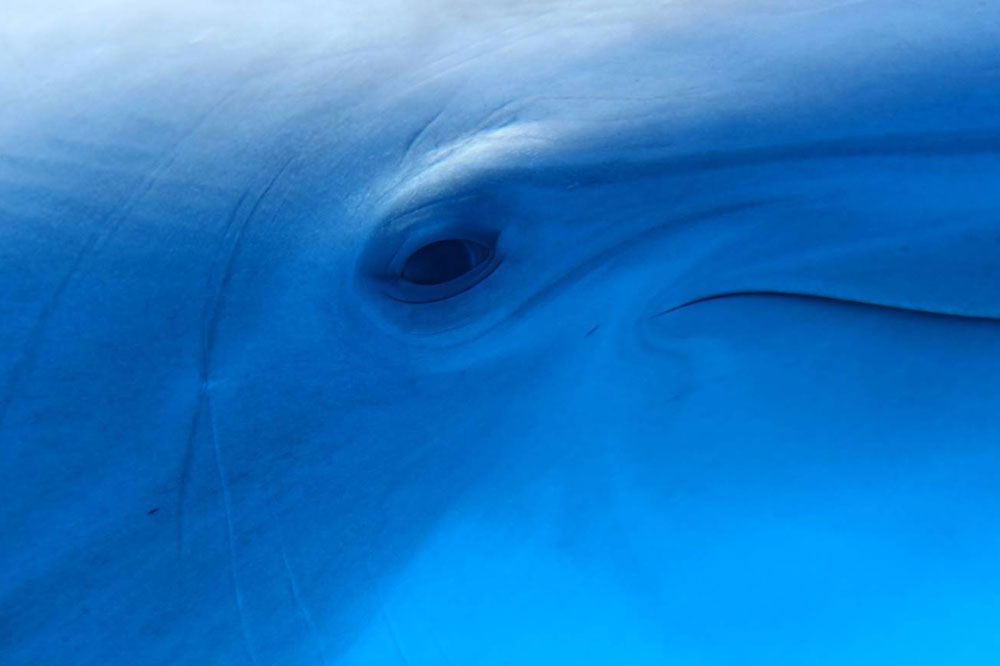 The eight-foot underwater touchscreen features specialized dolphin-friendly “apps” and a symbolic keyboard to provide the dolphins with opportunities to interact with the system. To make the system safe for the dolphins, the touchscreen has been installed outside an underwater viewing window, so that no parts of the device are in the pool: the animals’ touch is detected optically.

While the research is still in its early stages, the team has embarked on studies aimed at understanding dolphin vocal learning and communication, their capacity for symbolic communication, and what patterns of behavior may emerge when the animals have the ability to request items, videos, interactions, and images.

A dolphin’s version of touchscreen Whack-a-Mole.

The interdisciplinary research team is comprised of biophysicist Marcelo Magnasco, professor and head of the Laboratory of Integrative Neuroscience at Rockefeller University, and Diana Reiss, a dolphin cognition and communication research scientist and professor in the department of psychology at Hunter College. Also involved are Ana Hocevar, a postdoctoral research scientist; and Sean Woodward, a doctoral student, both in Magnasco’s lab.

“It was surprisingly difficult to find an elegant solution that was absolutely safe for the dolphins, but it has been incredibly rewarding to work with these amazing creatures and see their reactions to our system,” says Magnasco. “It has always been hard to keep up with dolphins, they are so smart; a fully interactive and programmable system will help us follow them in any direction they take us.”

In addition to the touchscreen itself, the dolphin’s habitat at the National Aquarium has been outfitted with equipment to record their behavior and vocalizations as they encounter and begin to use the technology.

“We hope this technologically-sophisticated touchscreen will be enriching for the dolphins and also enrich our science by opening a window into the dolphin mind,” says Reiss. “Giving dolphins increased choice and control allows them to show us reflections of their way of thinking and may help us decode their vocal communication.”

Already, the scientists have begun to introduce the dolphins to some of the system’s interactive apps, so the animals can explore on their own how touching the screen results in specific contingencies. Without any explicit training or encouragement, one of the younger dolphins, Foster, spontaneously showed immediate interest and expertise in playing a dolphin version of Whack-a-Mole, in which he tracks and touches moving fish on the touchscreen.

The researchers believe this technology will help extend the high-throughput revolution in biology that has brought us whole genome sequencing and the BRAIN project, into the field of animal cognition. They also hope that the information gleaned from this research will result in increased empathy toward dolphins and inspire global policies for their protection.

Contacts and sources:
Katherine Fenz
Rockefeller University
on May 28, 2017