Injured plants send off chemical warnings to their neighbors.

When Harsh Bais, a botanist at the University of Delaware, emailed Connor Sweeney to tell the high school student he would be willing to mentor him on a research project, Sweeney, a competitive swimmer, was so ecstatic he could have swum another 200-meter butterfly at practice.

"I knew I would have a lot to learn, but I was ready for that," says the 18-year-
old from Wilmington, Delaware.

In studies of Arabidopsis thaliana, also known as mustard weed, a team of researchers at the University of Delaware found that when a plant has its leaf nicked, it plant sends out an emergency alert to neighboring plants, which begin beefing up their defenses. 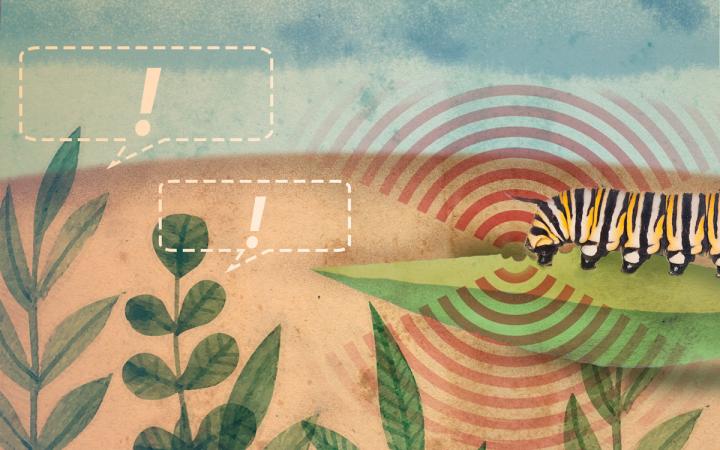 Two years and dozens of experiments later, Sweeney, now a senior at Charter School of Wilmington, is the first author of a research article published in Frontiers in Plant Science, a leading scientific journal--a rare achievement for a high school student.

What Sweeney and Prof. Bais discovered at the University of Delaware may make you think differently from now on when you mow the lawn or the cat starts noshing on your houseplants.

In studies of Arabidopsis thaliana, also known as mustard weed, the team found that when a leaf was nicked, the injured plant sent out an emergency alert to neighboring plants, which began beefing up their defenses.

"A wounded plant will warn its neighbors of danger," says Bais, who is an associate professor of plant and soil sciences in UD's College of Agriculture and Natural Resources. "It doesn't shout or text, but it gets the message across. The communication signals are in the form of airborne chemicals released mainly from the leaves."

Sweeney delved into work in Bais's lab at the Delaware Biotechnology Institute after school, on weekends and during summer breaks, culturing an estimated thousand Arabidopsis plants for experiments. Seeds were placed in Petri plates and test tubes containing agar, a gelatinous growing medium. Each batch of seeds would germinate after about six days, transforming into delicate-stemmed
three-inch plants with bright-green leaves.

In experiments, a University of Delaware researcher and a high school student found that when mustard weed gets injured, it sends warnings to its neighboring plants. 'The communication signals are in the form of airborne chemicals released mainly from the leaves,' botanist Harsh Bais said. 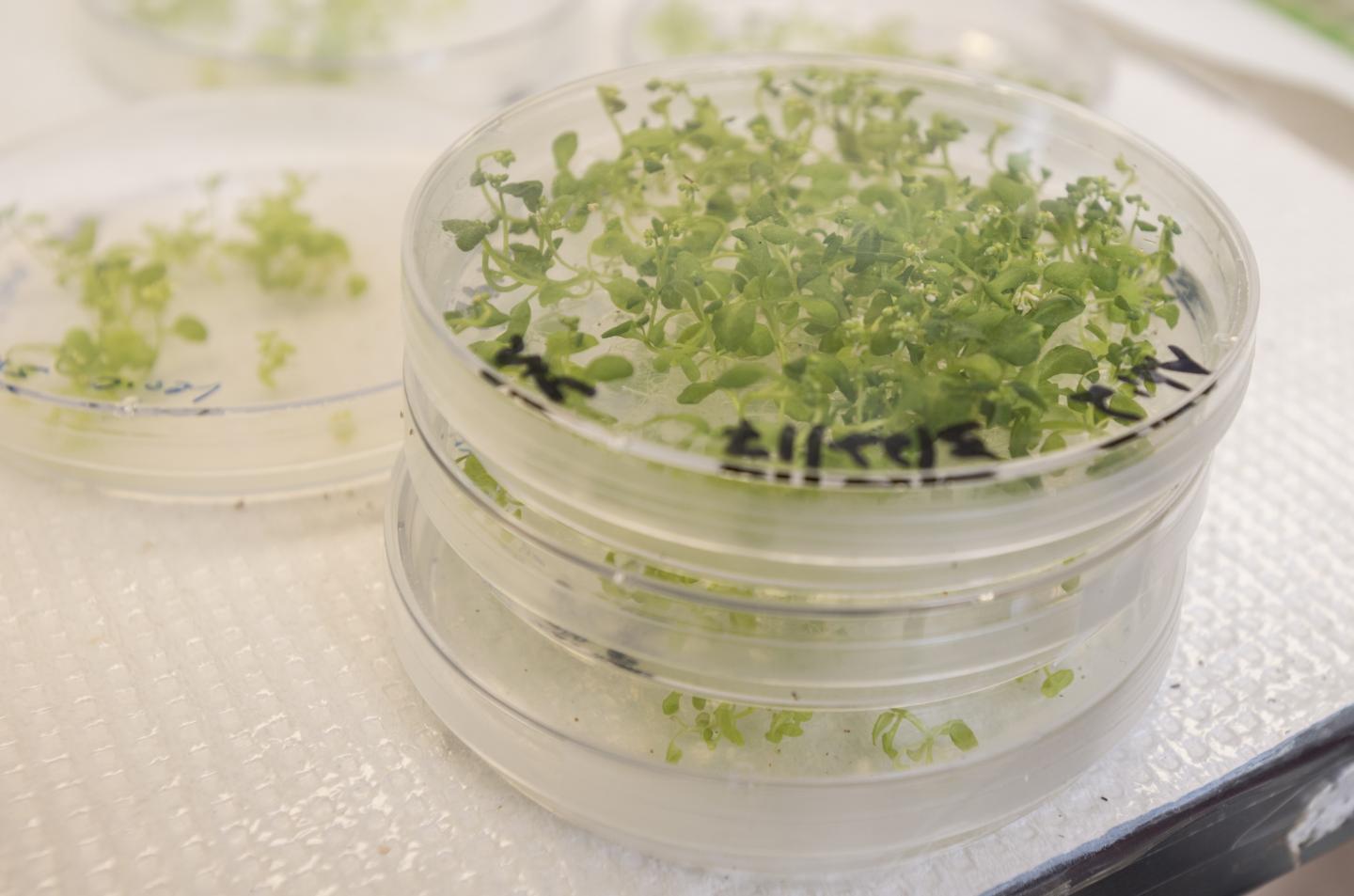 One day in the lab, Sweeney put two plants a few centimeters apart on the same Petri plate and made two small cuts on the leaf of one to simulate an insect's attack.

What happened next, as Sweeney says, was "an unexpected surprise." The next day, the roots on the uninjured neighbor plant had grown noticeably longer and more robust--with more lateral roots poking out from the primary root.

"It was crazy--I didn't believe it at first," Bais says. "I would have expected the injured plant to put more resources into growing roots. But we didn't see that."

Bais asked Sweeney to repeat the experiment multiple times, partitioning the plants to rule out any communication between the root systems. In previous research, Bais had shown how soil bacteria living among the roots can signal leaf pores, called stomata, to close up to keep invasive pathogens out.

"The reason why the uninjured plant is putting out more roots is to forage and acquire more nutrients to strengthen its defenses," Bais says. "So we began looking for compounds that trigger root growth."

Sweeney measured auxin, a key plant growth hormone, and found more of this gene expressed in neighboring plants when an injured plant was around. He also confirmed that neighbor plants of injured plants express a gene that corresponds to a malate transporter (ALMT-1). Malate attracts beneficial soil microbes, including Bacillus subtilis, which Bais and his colleagues discovered several years ago. Apparently, uninjured plants that are in close proximity to injured ones and that have increased malate transporter associate more with these microbes. These beneficials bond with the roots of the uninjured plants to boost their defenses.

Homing in on chemical signals

"So the injured plant is sending signals through the air. It's not releasing these chemicals to help itself, but to alert its plant neighbors," Bais said.

What are these mysterious concoctions, known scientifically as volatile organic compounds, and how long do they persist in the atmosphere or in soil for that matter--is it like a spritz of perfume or the lingering aroma of fresh-cooked popcorn?

"We don't know yet," says Bais, who has already started this next leg of the research. "But if you go through a field of grass after it's been mowed or a crop field after harvesting, you'll smell these compounds."

Bais credits Sweeney for the discovery, praising his hard work and willingness to learn, on top of his other high school studies and swimming upwards of 22 hours a week.

"You have to approach this work with dedication and completeness. You can't just do it halfway," Bais says. "In Connor, you have grad student material. Wherever he will go, he will shine."

"Working with Dr. Bais has been great," Sweeney says. "Most kids don't get to work in a lab. I've actually completed the whole project and written a paper. It's very exciting."

Sweeney also credits swimming for helping him with the science.

"Swimming requires a certain level of mental tenacity--it requires staring at the bottom of a pool," he says. "The learning curve here was very steep for me. When I had contamination in a lab sample, when I breathed on something, I had to start over. But the patience and diligence I've learned have made me a better scientist."

The son of UD alums, Sweeney first visited the Delaware Biotechnology Institute as an eighth grader, for a boot camp on basic laboratory procedures, which sparked his interest in research. He has since won the 2016 Delaware BioGENEius Challenge, was a 2016 international BioGENEius Challenge finalist and was named a semifinalist in the 2017 Regeneron Science Talent Search. This fall, he will head off to MIT, double-majoring in economics and biological engineering.

"I'm interested in looking at the agricultural side of science," he says. "It may not sound sexy, but everybody needs to eat. So if you can use cutting-edge technologies in genomics that feed more people while lessening the environmental footprint, that's where I want to be."

Contacts and sources:
Peter Bothum
University of Delaware
on May 17, 2017