One million miles from Earth, a NASA camera is capturing unexpected flashes of light reflecting off our planet.

The homeward-facing instrument on NOAA’s Deep Space Climate Observatory, or DSCOVR, launched in 2015, caught hundreds of these flashes over the span of a year. NASA’s Earth Polychromatic Imaging Camera (EPIC) instrument aboard DSCOVR is taking almost-hourly images of the sunlit planet from its spot between Earth and the sun. In a new study, scientists deciphered the tiny cause to the big reflections: high-altitude, horizontally oriented ice crystals.

An image from the EPIC instrument aboard DSCOVR, taken on Dec. 3, 2015, shows a glint over central South America (circled in red). 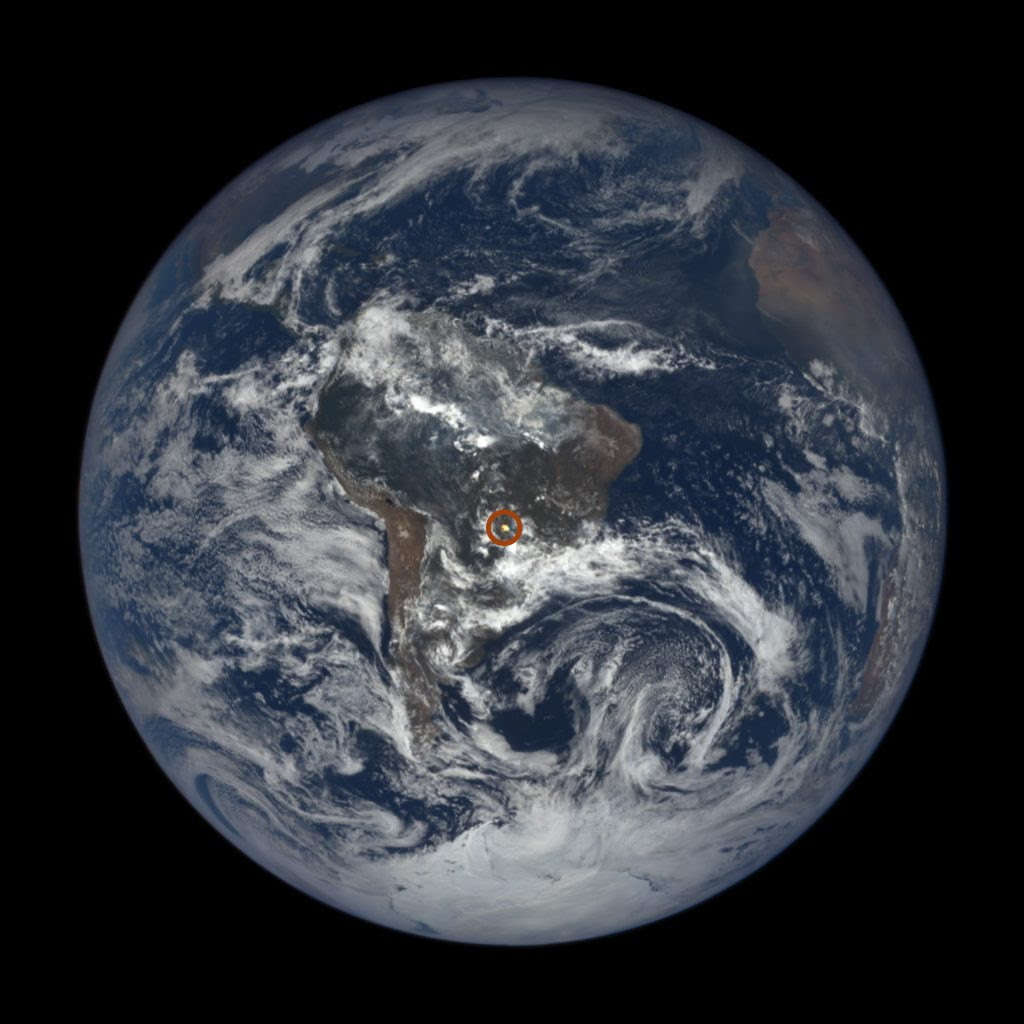 “The source of the flashes is definitely not on the ground,” said Alexander Marshak, DSCOVR deputy project scientist at NASA’s Goddard Space Flight Center in Greenbelt, Maryland, and lead author of the new study in Geophysical Research Letters, a journal of the American Geophysical Union. “It’s definitely ice, and most likely solar reflection off of horizontally oriented particles.”

Detecting glints like this from much farther away could be used by other spacecraft to study exoplanets, Marshak said. He is now investigating how common these horizontal ice particles are and whether they’re common enough to have a measureable impact on how much sunlight passes through the atmosphere. If so, it’s a feature that could be incorporated into computer models of how much heat is reaching and leaving Earth, he said. Watch a video of the glints captured by DSCOVR here.

Marshak first noticed light flashes occasionally appearing over oceans as he looked through daily EPIC images. Investigating them further, Marshak and his colleagues found similar reflections from our pale blue dot caught the attention of astronomer Carl Sagan in 1993. Sagan was looking at images taken by the Galileo spacecraft, which launched in 1989 to study Jupiter and its moons. During one if its gravitational-assist swings around Earth, Galileo turned its instruments on this planet and collected data. Sagan and his colleagues used that to test a key question: whether spacecraft could detect signatures of life from afar.

“Large expanses of blue ocean and apparent coastlines are present, and close examination of the images shows a region of [mirror-like] reflection in ocean but not on land,” they wrote of the glints.

Flashes of light reflected off oceans – like those referenced by Sagan – could have a simple explanation, Marshak said: sunlight hits a smooth part of an ocean or lake, and reflects directly back to the sensor, like taking a flash-picture in a mirror.

But when the scientists took another look at the Galileo images, they saw something Sagan and his colleagues apparently missed – bright flashes of light over land as well. As the contact listed on the website that posts all EPIC images, Marshak started getting emails from people curious about what the flashes were.

“We found quite a few very bright flashes over land as well,” he said. “When I first saw it I thought maybe there was some water there, or a lake the sun reflects off of. But the glint is pretty big, so it wasn’t that.”

Instead, he and his colleagues thought of water elsewhere in the Earth system: ice particles high in the atmosphere. They then conducted a series of experiments to confirm the cause of the distant flashes.

First, they cataloged all prospective sunlight glints over land in images from the EPIC camera and found 866 bursts between DSCOVR’s launch in June 2015 and August 2016.

This helped confirm that it wasn’t something like lightning causing the flashes. “Lightning doesn’t care about the sun and EPIC’s location,” Marshak said.

Another feature of the EPIC data helped confirm that the flashes were from a high altitude, not simply water on the ground. Two channels on the instrument are designed to measure the height of clouds, and when the scientists went to the data they found high cirrus clouds, 5 to 8 kilometers (3 to 5 miles) where the glints were located.