How Scientists Turned a Flag into a Loudspeaker

A paper-thin, flexible device created at Michigan State University not only can generate energy from human motion, it can act as a loudspeaker and microphone as well, nanotechnology researchers report today in Nature Communications.

The audio breakthrough could eventually lead to such consumer products as a foldable loudspeaker, a voice-activated security patch for computers and even a talking newspaper.

“Every technology starts with a breakthrough and this is a breakthrough for this particular technology,” said Nelson Sepulveda, MSU associate professor of electrical and computer engineering and primary investigator of the federally funded project.

Like a traditional loudspeaker, this sheet-like, flexible device can transmit sound. Created by MSU engineers, the device - known as a ferroelectret nanogenerator, or FENG - can be embedded into a flag or other fabric. It could one day lead to a foldable loudspeaker or an audio newspaper. 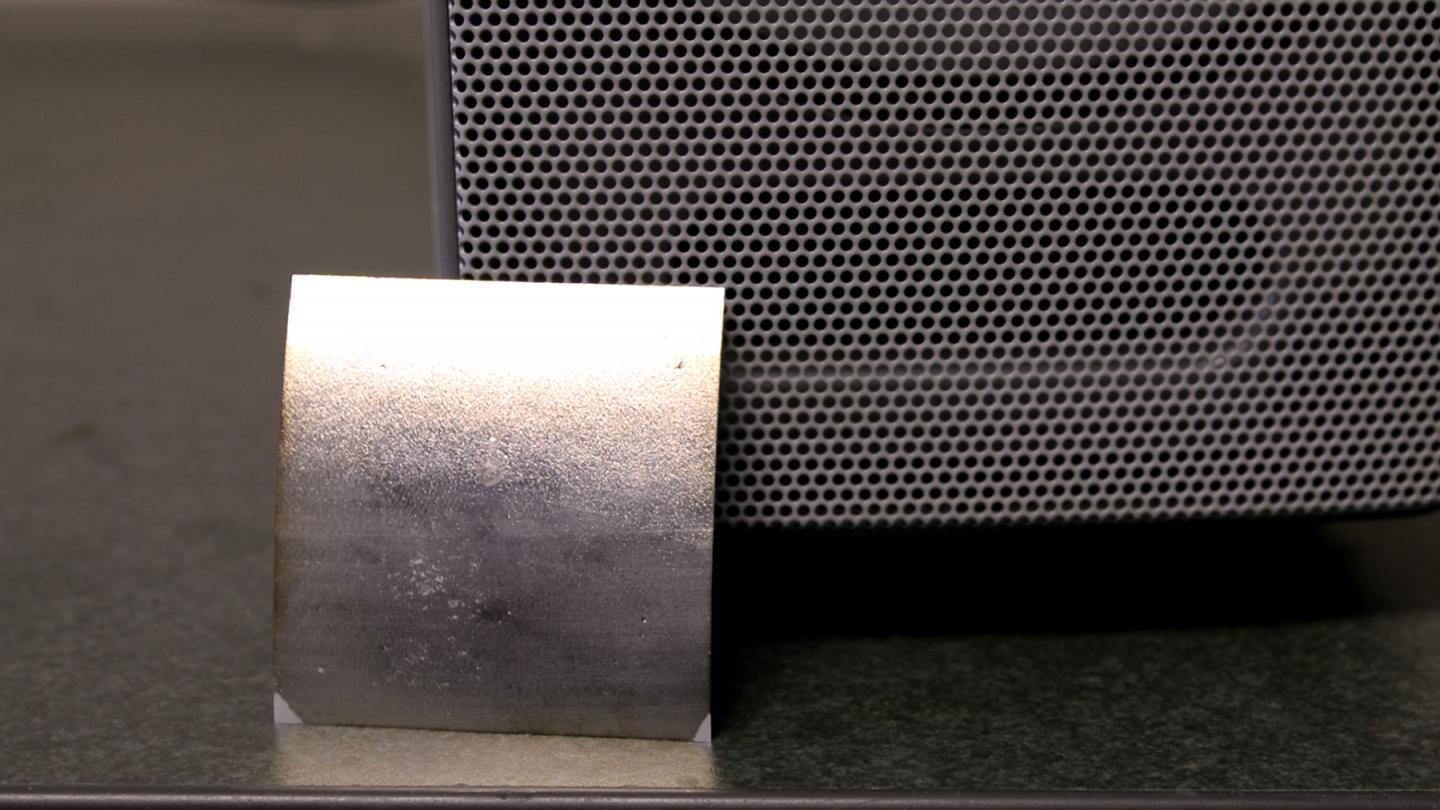 In late 2016, Sepulveda and his team successfully demonstrated their sheet-like device – known as a ferroelectret nanogenerator, or FENG – by using it to power a keyboard, LED lights and an LCD touch-screen. That process worked with a finger swipe or a light pressing motion to activate the devices – converting mechanical energy to electrical energy.

To demonstrate the microphone effect, the researchers developed a FENG security patch that uses voice recognition to access a computer. The patch was successful in protecting an individual’s computer from outside users. “The device is so sensitive to the vibrations that it catches the frequency components of your voice,” Sepulveda said.

To demonstrate the loudspeaker effect, the FENG fabric was embedded into an MSU Spartan flag. Music was piped from an iPad through an amplifier and into the flag, which then reproduced the sound flawlessly. “The flag itself became the loudspeaker,” Sepulveda said. “So we could use it in the future by taking traditional speakers, which are big, bulky and use a lot of power, and replacing them with this very flexible, thin, small device.”

Imagine a day when someone could pull a lightweight loudspeaker out of their pocket, slap it against the wall and transmit their speech to a roomful of people, Sepulveda said.

“Or imagine a newspaper,” he added, “where the sheets are microphones and loudspeakers. You could essentially have a voice-activated newspaper that talks back to you"

Nelson Sepulveda, associate professor of engineering at MSU, created an ultra-thin, foldable keyboard that can harvest energy from human motion -- or from the very act of pressing the keys. 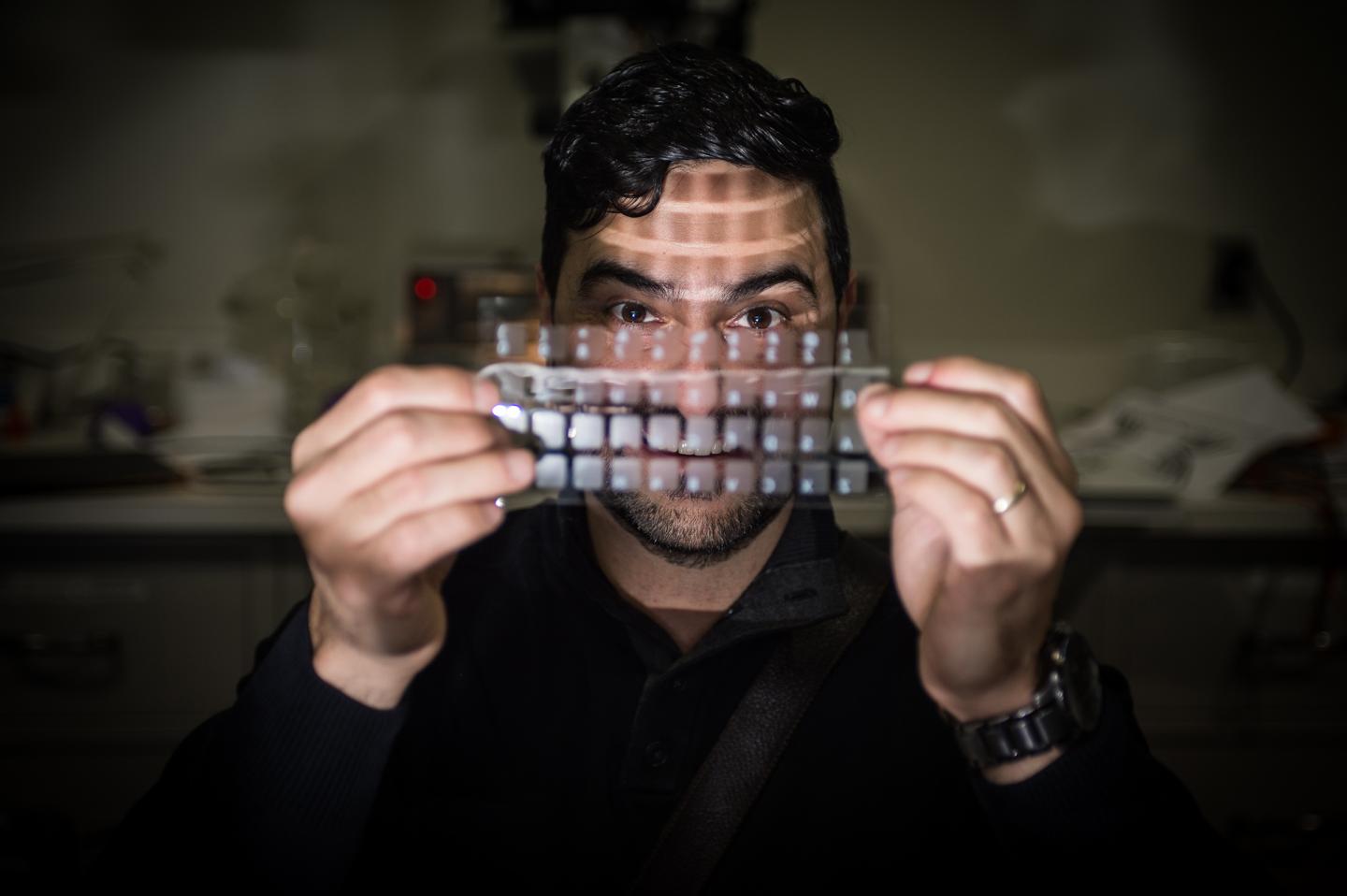 Wei Li, an MSU engineering researcher and lead author of the paper in Nature Communications, said other potential applications of the FENG include noise-cancelling sheeting and a health-monitoring wristband that is voice-protected.

The innovative process of creating the FENG starts with a silicone wafer, which is then fabricated with several layers, or thin sheets, of environmentally friendly substances including silver, polyimide and polypropylene ferroelectret. Ions are added so that each layer in the device contains charged particles. Electrical energy is created when the device is compressed by human motion, or mechanical energy.

The research is funded by the National Science Foundation. Other co-authors are David Torres, Ramon Diaz and Chuan Wang from MSU, and Zhengjun Wang, Changsheng Wu and Zhong Lin Wang from the Georgia Institute of Technology.