Fly with Super Ears May Lead to Extraordinary Hearing Aids

Ormia ochracea's sense of directional hearing is second to none in the animal kingdom.

“These flies have highly specialized ears that provide the most acute directional hearing of any animal,” says Andrew Mason, an associate professor of biology at University of Toronto (U of T) Scarborough. “The mechanism that makes their hearing so exceptional has even led to a range of bio-inspired technology, like the mini-directional microphones used in hearing aids.”

But when it comes to hearing aids, engineers need to solve something called the “cocktail-party-problem,” that is how to improve signal detection in noisy environments, like tracking a conversation at a crowded party.


New research has found that Ornia's mechanically-coupled eardrums could help it from being distracted by other noises – a finding that could help in the development of better hearing aids.

Unlike most animals that have two separate ears, both of Ormia’s eardrums are connected together, kind of like a seesaw with a rigid joint in the middle that can bend. When one of eardrums vibrates from a sound wave it pushes the other, and the tiny time difference it takes to activate one ear drum allows the fly to figure out which direction the sound is coming from.

“It’s interesting that something so small can be sensitive to the direction of sound,” says Mason. “They’re tiny relative to the wavelength of sound they’re able to localize so they shouldn’t be able to do what they do. But, they can because of the mechanical coupling.”

The small nocturnal fly is native to the southern United States and Mexico, where the female uses its exceptional hearing to locate the songs of male crickets, where it deposits its larvae. The larvae then burrow inside the cricket, eating it alive in the process.

Engineers are interested in using the principle of Ormia’s mechanically coupled eardrums to develop artificial sensors. These sensors could better locate signals for a range of uses where the size of the object relative to the signal might be a limiting factor – from hearing aids, to gunshot detectors, to different types of radar.

Animals usually deal with the problem of distracting noises through something called spatial release from masking (SRM), which allows for better signal detection when there’s a separation between what they’re interested in hearing and any distracting noises.

Mason and his former PhD student Norman Lee, who is now an assistant professor of biology at St. Olaf College in Minnesota, found that Ornia's eardrums prevent it from using SRM.

In a series of lab tests, they found that when a distracting noise was introduced to one side of the fly, it diverted it away from the cricket sound the fly should be interested in. They found that since the fly’s hearing is extremely directionally sensitive, and because of its mechanically coupled hearing system, a noise placed at one side obscures the signal in one ear.

“A distracting noise that is more to one side will cause an auditory illusion by obscuring the signal in that ear,” says Mason. “It essentially ends up fooling the fly into perceiving that the signal is coming from one place, so it ends up pushing it away from the actual cricket sound.” 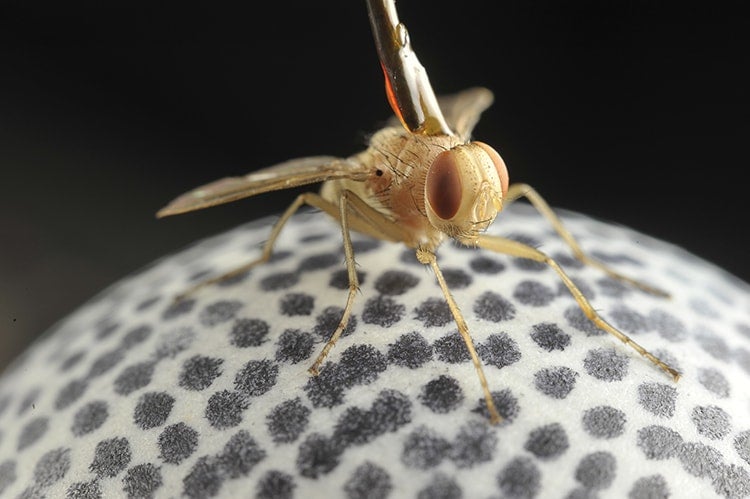 In the research, Mason placed the fly on a spherical treadmill – like a table tennis ball – fixed in place using wax. The other end of the pin was then held by a micromanipulator so researchers could precisely position the fly relative to a sound source.

When a cricket song was broadcast from the speaker, the fly would attempt to walk towards the sound source. But because it was held in place, its walking movement rotated the ball underneath. The movement of the ball was then detected by an optical sensor, allowing researchers to record the virtual movements of the fly.

Mason’s research, which was supported by the Natural Sciences and Engineering Research Council of Canada (NSERC) and has been published in the biology journal eLife, may be of interest to evolutionary biologists as well.

Mason says engineers may also be interested because it highlights the possible limitations of mechanically-coupled hearing systems. While Ormia offers a great directional system that offers a fast and accurate response, it’s not clear how the flies navigate more complex situations, like multiple signals and noisy environments.

“These flies are very accurate for one thing, which is detecting cricket sounds, but that comes at a cost since they’ve evolved to focus on this very restrictive set of information,” he says

Somehow, he adds, the flies are able to overcome these apparent limitations in nature. How they’re able to do this will be an important area of Mason’s future research.

Contacts and sources:
Don Campbell
University of Toronto
on May 17, 2017