Astronomers Create the Largest Map of the Universe Yet

Astronomers of the extended Baryonic Oscillation Spectroscopic Survey, led by EPFL Professor Jean-Paul Kneib, used the Sloan telescope to create the first map of the Universe based entirely on quasars.

Quasars are incredibly bright and distant points of light powered by supermassive black holes. As matter and energy fall into the black hole, they heat up to incredible temperatures and begin to glow with excessive brightness. By observing this cosmic glow, the scientists of the multi-institutional Sloan Digital Sky Survey (SDSS), which includes EPFL, have constructed the largest map of the distant Universe to-date.

A slice through largest-ever three-dimensional map of the Universe. Earth is at the left, and distances to galaxies and quasars are labelled by the lookback time to the objects (lookback time means how long the light from an object has been traveling to reach us here on Earth). The locations of quasars (galaxies with supermassive black holes) are shown by the red dots, and nearer galaxies mapped by SDSS are also shown (yellow).
The right-hand edge of the map is the limit of the observable Universe, from which we see the Cosmic Microwave Background (CMB) – the light “left over” from the Big Bang. The bulk of the empty space in between the quasars and the edge of the observable universe are from the “dark ages”, prior to the formation of most stars, galaxies, or quasars. Click on the image for a larger version. 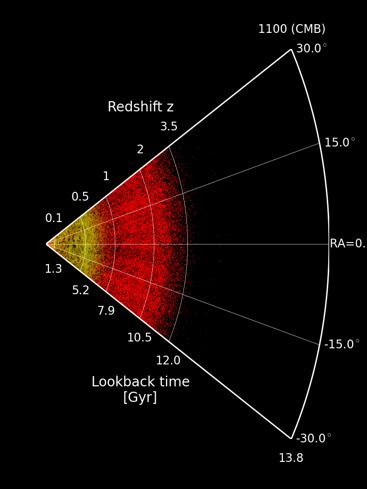 As eBOSS continues to survey the sky over the next 3 years, the blank regions will be filled in with more galaxies and quasars.

The work will be published in the Monthly Notices of the Royal Astronomical Society (link to preprint).

Quasars are supermassive black holes at the centers of galaxies and they radiate huge amounts of electromagnetic energy. “Because quasars are so bright, we can see them all the way across the Universe,” says study co-leader Ashley Ross (Ohio State University). “That makes them the ideal objects to use to make the biggest map yet.”

“These quasars are so far away that their light left them when the Universe was between 3 and 7 billion years old, long before the Earth even existed,” adds Gongbo Zhao from the National Astronomical Observatory of China, the study’s other co-leader.

To construct the map, the scientists used the SDSS telescopes at New Mexico to measure accurate 3D positions for an unprecedented sample of over 147,000 quasars. This work took place during the first two years of the Extended Baryon Oscillation Spectroscopic Survey (eBOSS), one of the component research projects of SDSS led by Jean-Paul Kneib, Professor of Astrophysics at EPFL. The SDSS telescope observations gave the astronomers the quasars’ distances, which they then used to pinpoint the quasars’ positions in a 3D map.

But the scientists didn’t stop there; they wanted to use to understand the expansion history of the Universe. For this they went a step further and used a clever technique that involves “baryon acoustic oscillations” (BAOs). These are the present-day imprint of sound waves that travelled through the early Universe, when it was much hotter and denser than it is now. But when the Universe was 380,000 years old, conditions changed suddenly and the sound waves became “frozen” in place, imprinted in the 3D structure of the Universe we see today. 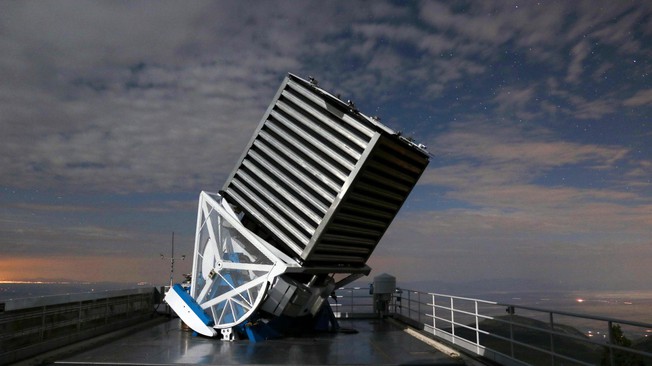 The process that produced these frozen BAOs is simple, which means that scientists can have a very good idea of what BAOs must have looked like in the early Universe. So when we look at the 3D structure of the Universe today, it contains these ancient BAOs, but massively stretched out by the expansion of the universe.

The astronomers used the observed size of a BAO as “standard ruler” to measure distances in their 3D map, the way we can estimate the length of a football field by measuring the apparent angle of a meter rule on one side. “You have meters for small units of length, kilometres or miles for distances between cities, and we have the BAO scale for distances between galaxies and quasars in cosmology,” says Pauline Zarrouk, a PhD student at Irfu/CEA (University Paris-Saclay) who measured the projected BAO scale.

Working backwards in time, the SDSS astronomers covered a range of time periods never observed before. The study measured the conditions when the Universe was just 3 to 7 billion years old, more than 2 billion years before the Earth formed.

“The results of our study confirm the Standard Model of cosmology, where the Universe follows the predictions of Einstein’s General Theory of Relativity but includes the yet unknown components of “dark matter”, and the mysterious ‘dark energy’, which is needed to explain the accelerated expansion of the Universe,” says Jean-Paul Kneib.

The eBOSS experiment continues with the SDSS telescope. As the eBOSS astronomers observe more quasars and nearby galaxies, the size of their 3D map will keep growing. And after eBOSS is complete, a new generation of sky surveys will begin, including the Dark Energy Spectroscopic Instrument (DESI) and the European Space Agency Euclid satellite mission, two projects in which EPFL is also partner. These will increase the fidelity of the maps by a factor of ten compared with eBOSS, revealing the Universe and dark energy in unprecedented detail.