The common lineage of great apes and humans split several hundred thousand earlier than hitherto assumed, according to an international research team headed by Professor Madelaine Böhme from the Senckenberg Centre for Human Evolution and Palaeoenvironment at the University of Tübingen and Professor Nikolai Spassov from the Bulgarian Academy of Sciences.

The researchers investigated two fossils of Graecopithecus freybergi with state-of-the-art methods and came to the conclusion that they belong to pre-humans. Their findings, published today in two papers in the journal PLOS ONE, further indicate that the split of the human lineage occurred in the Eastern Mediterranean and not - as customarily assumed - in Africa.

This is a 7.24 million year old upper premolar of Graecopithecus from Azmaka, Bulgaria. 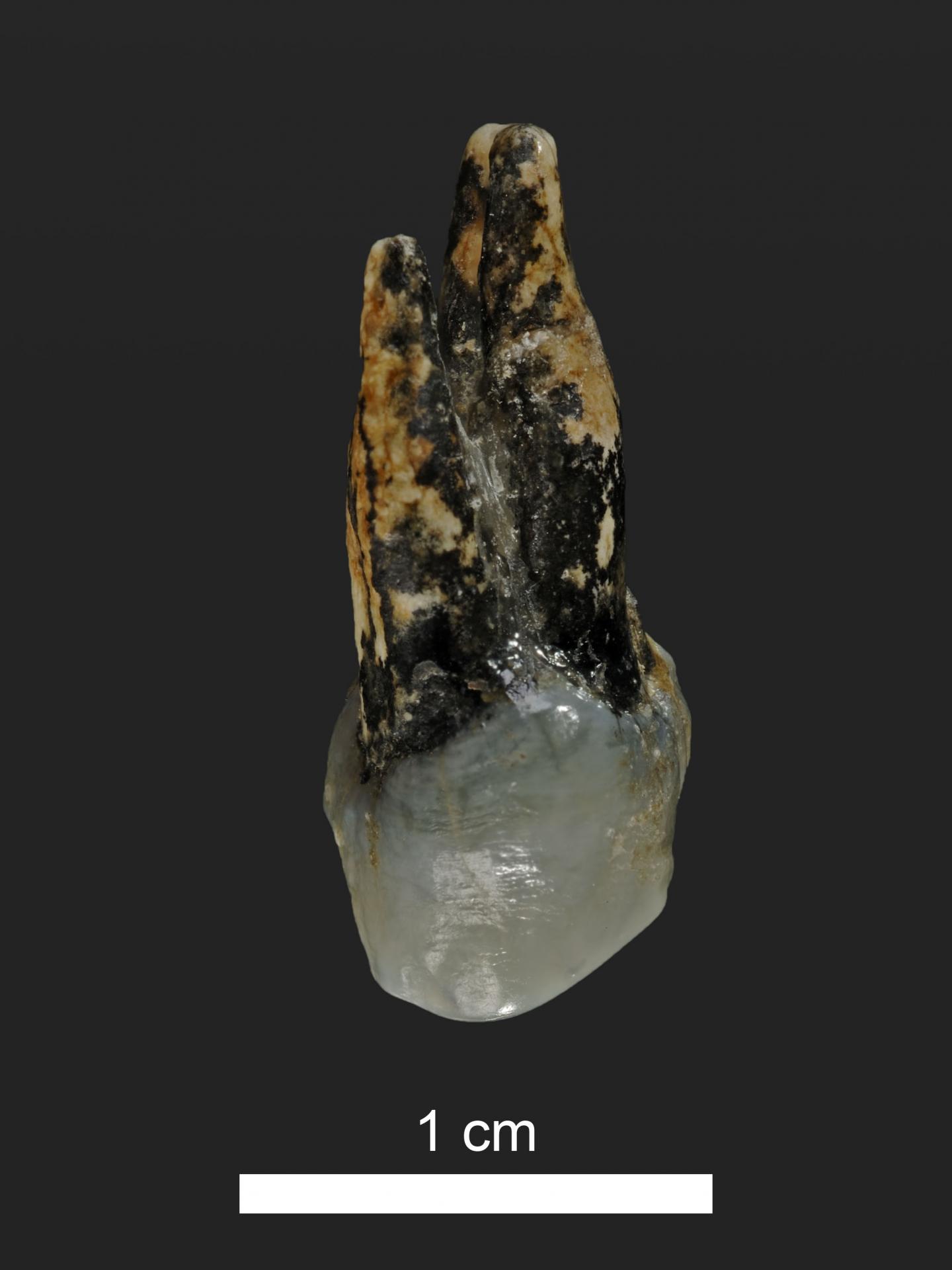 Present-day chimpanzees are humans' nearest living relatives. Where the last chimp-human common ancestor lived is a central and highly debated issue in palaeoanthropology. Researchers have assumed up to now that the lineages diverged five to seven million years ago and that the first pre-humans developed in Africa.

According to the 1994 theory of French palaeoanthropologist Yves Coppens, climate change in Eastern Africa could have played a crucial role. The two studies of the research team from Germany, Bulgaria, Greece, Canada, France and Australia now outline a new scenario for the beginning of human history.

The team analyzed the two known specimens of the fossil hominid Graecopithecus freybergi: a lower jaw from Greece and an upper premolar from Bulgaria. Using computer tomography, they visualized the internal structures of the fossils and demonstrated that the roots of premolars are widely fused.

This is the lower jaw of the 7.175 million year old Graecopithecus freybergi (El Graeco) from Pyrgos Vassilissis, Greece (today in metropolitan Athens). 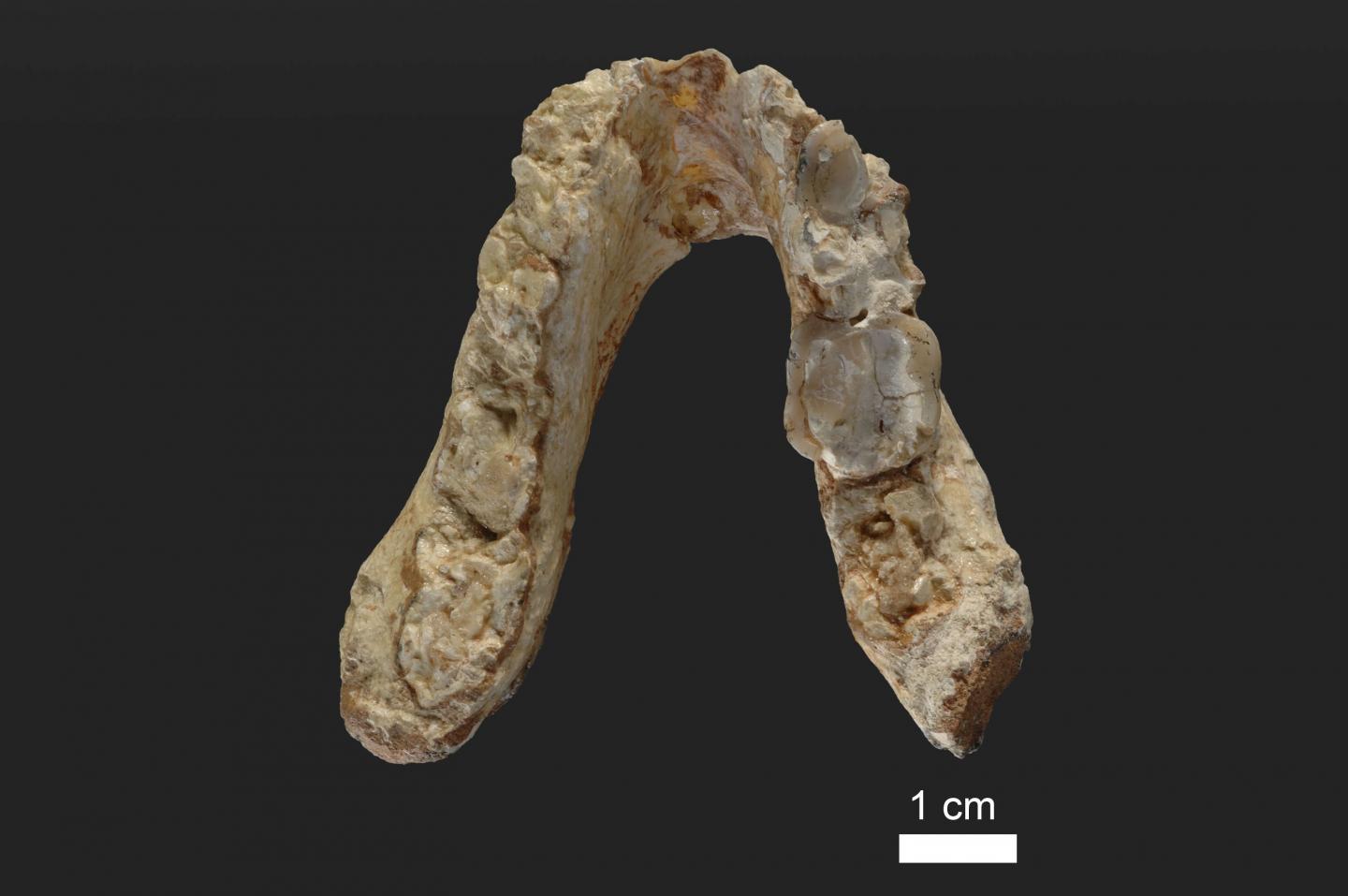 "While great apes typically have two or three separate and diverging roots, the roots of Graecopithecus converge and are partially fused - a feature that is characteristic of modern humans, early humans and several pre-humans including Ardipithecus and Australopithecus", said Böhme.

The lower jaw, nicknamed 'El Graeco' by the scientists, has additional dental root features, suggesting that the species Graecopithecus freybergi might belong to the pre-human lineage. "We were surprised by our results, as pre-humans were previously known only from sub-Saharan Africa," said Jochen Fuss, a Tübingen PhD student who conducted this part of the study.

Furthermore, Graecopithecus is several hundred thousand years older than the oldest potential pre-human from Africa, the six to seven million year old Sahelanthropus from Chad. The research team dated the sedimentary sequence of the Graecopithecus fossil sites in Greece and Bulgaria with physical methods and got a nearly synchronous age for both fossils - 7.24 and 7.175 million years before present. "It is at the beginning of the Messinian, an age that ends with the complete desiccation of the Mediterranean Sea," Böhme said.

Professor David Begun, a University of Toronto paleoanthropologist and co-author of this study, added, "This dating allows us to move the human-chimpanzee split into the Mediterranean area."

Environmental changes as the driving force for divergence

As with the out-of-East-Africa theory, the evolution of pre-humans may have been driven by dramatic environmental changes. The team led by Böhme demonstrated that the North African Sahara desert originated more than seven million years ago. The team concluded this based on geological analyses of the sediments in which the two fossils were found. Although geographically distant from the Sahara, the red-colored silts are very fine-grained and could be classified as desert dust. An analysis of uranium, thorium, and lead isotopes in individual dust particles yields an age between 0.6 and 3 billion years and infers an origin in Northern Africa.

Moreover, the dusty sediment has a high content of different salts. "These data document for the first time a spreading Sahara 7.2 million years ago, whose desert storms transported red, salty dusts to the north coast of the Mediterranean Sea in its then form," the Tübingen researchers said. This process is also observable today.

This is an electron microscope image of a dust particle rounded by eolian transport. It originated in the Sahara desert and was found in 7.2 million year old sediments in Greece. 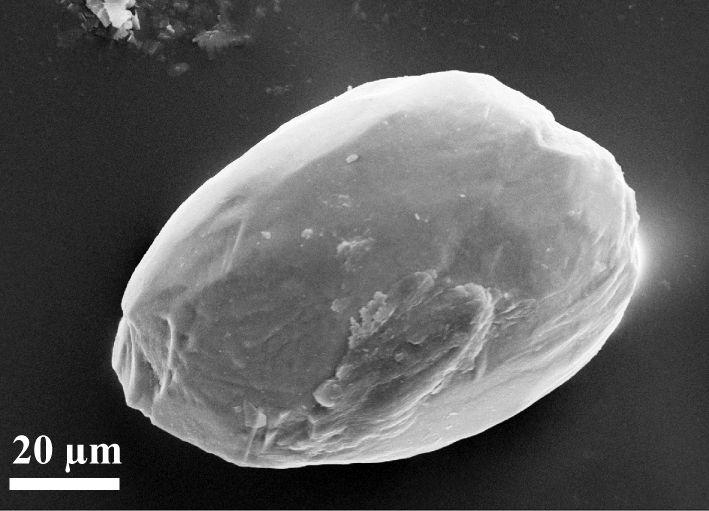 However, the researchers' modelling shows that, with up to 250 grams per square meter and year, the amount of dust in the past considerably exceeds recent dust loadings in Southern Europe more than tenfold, comparable to the situation in the present-day Sahel zone in Africa.

The researchers further showed that, contemporary to the development of the Sahara in North Africa, a savannah biome formed in Europe. Using a combination of new methodologies, they studied microscopic fragments of charcoal and plant silicate particles, called phytoliths. Many of the phytoliths identified derive from grasses and particularly from those that use the metabolic pathway of C4-photosynthesis, which is common in today's tropical grasslands and savannahs. The global spread of C4-grasses began eight million years ago on the Indian subcontinent - their presence in Europe was previously unknown.

"The phytolith record provides evidence of severe droughts, and the charcoal analysis indicates recurring vegetation fires," said Böhme. "In summary, we reconstruct a savannah, which fits with the giraffes, gazelles, antelopes, and rhinoceroses that were found together with Graecopithecus," Spassov added

"The incipient formation of a desert in North Africa more than seven million years ago and the spread of savannahs in Southern Europe may have played a central role in the splitting of the human and chimpanzee lineages," said Böhme. She calls this hypothesis the North Side Story, recalling the thesis of Yves Coppens, known as East Side Story.

The papers will appear online:

Potential hominin affinities of Graecopithecus from the Late Miocene of Europe) at http://journals.plos.org/plosone/article?id=10.1371/journal.pone.0177127 a

Messinian age and savannah environment of the possible hominin Graecopithecus from Europe. http://journals.plos.org/plosone/article?id=10.1371/journal.pone.0177347
on May 22, 2017