For road vehicles, wind resistance increases fuel consumption. But one way to fight wind is with wind. Researchers in Sweden are experimenting with reducing drag on trucks with electric wind devices that mimic the way vortex generators increase lift on airplane wings.

You might have noticed them while staring out an airplane window, studying the wing. Those little fins – the vortex generators on the upper side of the airfoil – create vortices to enhance lift at takeoff and landing. Now researchers at KTH Royal Institute of Technology are successfully testing a way to reduce drag on trucks by creating similar air vortices on a vehicle’s front corners.

Tests at KTH show that trucks could reduce fuel consumption by up to 5 percent by using plasma to cut wind resistance.

A test model for plasma actuators. 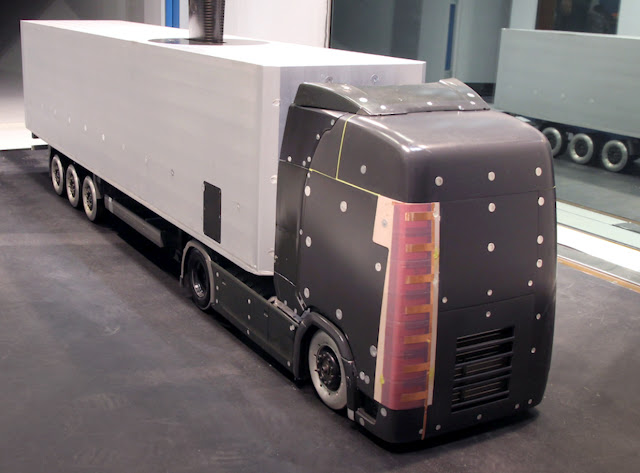 
But unlike airplane vortex generators made of solid material, these are invisible ones made with the help of electric wind.

KTH researcher Julie Vernet says the electric wind vortices she is testing can reduce fuel consumption by up to 5 percent on a flat-nosed, cab-over-engine design that is the standard for tractor trucks in Europe and Japan. 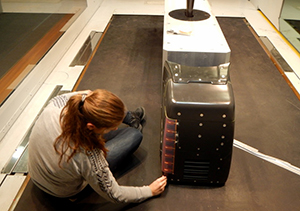 
Vernet says the electric wind is created by plasma actuators, devices that apply a high voltage between two electrodes. Surrounding air molecules become ionized and accelerate through the electric field – which results in wind. There are no moving mechanical parts, and unlike vortex generators on an airplane wing, these actuators can adapt to the strength and direction of the wind, she says.

“Also, trucks can’t have sharp things sticking out of the body, so this is a way to achieve the same effect,” says project supervisor Henrik Alfredsson, Professor of Fluid Physics at KTH.

Vortex generators operate on a basic aerodynamics principle – that if you reduce the separation of the airflow on the leeward side of an airfoil, you can enhance the lift and at the same time reduce the drag.

Likewise, when wind hits a truck at an angle, friction deprives the air of the energy it needs to push all the way around the opposite side of the truck. As it moves around the corner towards the leeward side of the vehicle, the air in the boundary layer slows down and cannot any longer follow the surface. This separation of the flow forms a bubble filled with eddies and swirls of air. That, incidentally, also explains why rain drops don’t blow off your rear window but sort of swirl around instead.

Reducing this drag has a measurable impact. It’s estimated that more than 20 percent of the vehicle’s energy losses come from wind resistance.

“Our ultimate goal is to reduce the flow separation that occurs on the front corners of the truck,” Vernet says. “By adding momentum close to the surface, the size of the separated region is reduced.”

The project is funded by the Swedish Energy Agency and is being conducted in cooperation between truck manufacturer ScaniaCV AB and the Departments of Aeronautical and Vehicle Engineering and Mechanics at KTH.