Why Are Different “Flavors” of Iron Found Around the Solar System?

New work from Carnegie’s Stephen Elardo and Anat Shahar shows that interactions between iron and nickel under the extreme pressures and temperatures similar to a planetary interior can help scientists understand the period in our Solar System’s youth when planets were forming and their cores were created. Their findings are published by Nature Geoscience.

Earth and other rocky planets formed as the matter surrounding our young Sun slowly accreted. At some point in Earth’s earliest years, its core formed through a process called differentiation—when the denser materials, like iron, sunk inward toward the center. This formed the layered composition the planet has today, with an iron core and a silicate upper mantle and crust.

Scientists can’t take samples of the planets’ cores. But they can study iron chemistry to help understand the differences between Earth’s differentiation event and how the process likely worked on other planets and asteroids.

A scanning electron microscope image of one of the experiments in Elardo and Shahar’s paper that shows a bright, semi-spherical metal (representing a core) next to a gray, quenched silicate (representing a magma ocean). 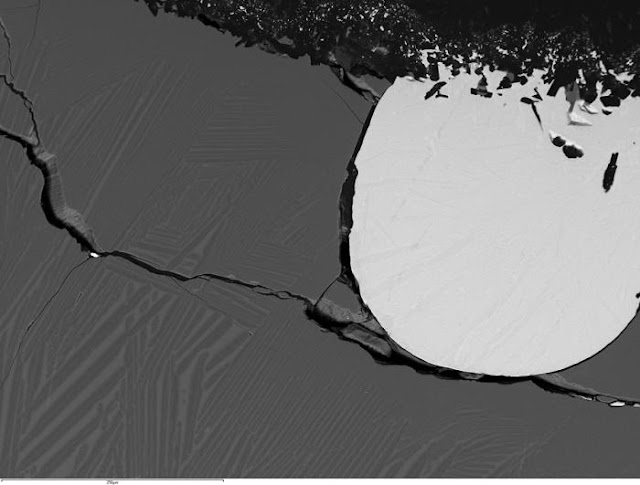 Image is courtesy of Stephen Elardo.

One key to researching Earth’s differentiation period is studying variations in iron isotopes in samples of ancient rocks and minerals from Earth, as well as from the Moon, and other planets or planetary bodies.

Every element contains a unique and fixed number of protons, but the number of neutrons in an atom can vary. Each variation is a different isotope. As a result of this difference in neutrons, isotopes have slightly different masses. These slight differences mean that some isotopes are preferred by certain reactions, which results in an imbalance in the ratio of each isotope incorporated into the end products of these reactions.

One outstanding mystery on this front has been the significant variation between iron isotope ratios found in samples of hardened lava that erupted from Earth’s upper mantle and samples from primitive meteorites, asteroids, the Moon, and Mars. Other researchers had suggested these variations were caused by the Moon-forming giant impact or by chemical variations in the solar nebula.

Elardo and Shahar were able to use laboratory tools to mimic the conditions found deep inside the Earth and other planets in order to determine why iron isotopic ratios can vary under different planetary formation conditions.

They found that nickel is the key to unlocking the mystery.

Under the conditions in which the Moon, Mars, and the asteroid Vesta’s cores were formed, preferential interactions with nickel retain high concentrations of lighter iron isotopes in the mantle. However, under the hotter and higher-pressure conditions expected during Earth’s core formation process, this nickel effect disappears, which can help explain the differences between lavas from Earth and other planetary bodies, and the similarity between Earth’s mantle and primitive meteorites.

“There’s still a lot to learn about the geochemical evolution of planets,” Elardo said. “But laboratory experiments allow us to probe to depths we can’t reach and understand how planetary interiors formed and changed through time.”