Tick ‘Glue’ as a Potential Bio-adhesive for Human Tissue

Ticks are well known for their ability to anchor themselves firmly to the skin, so that they can suck blood for several days. This anchoring mechanism is so effective because it is based on a cement-like substance with excellent adhesive properties, so that it works like a dowel for the mouthparts of the tick. Researchers from MedUni Vienna and Vienna University of Technology want to study this "tick cement" and recreate it chemically for use in biomaterial research.

Tick "cement" as a potential bioadhesive for human tissue 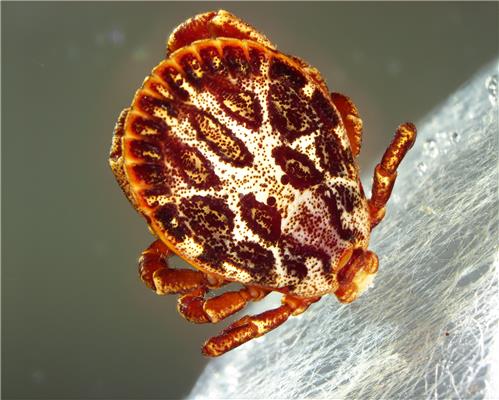 "It is totally conceivable that, in future, it will be possible to use this substance to produce a biological adhesive for human tissue, for example for anchoring tendons and ligaments to bone without using any metal," says project leader Sylvia Nürnberger from the Department of Trauma Surgery, outlining the objectives of the research work started in 2016 and the project funded by the Austrian Science Fund FWF, which is also part of the EU COST Action. COST is a European network for collaborating on national and international research activities in the field of science and technology, including that of bioadhesion. The EU "Bioadhesives" network, coordinated by the Ludwig Boltzmann Institute for Experimental and Clinical Traumatology, currently comprises 150 researchers from 30 countries.

As part of this project, Nürnberger is working with Martina Marchetti-Deschmann from Vienna University of Technology to study the composition of the natural tick "dowel" and how it could serve as a template for new tissue adhesives. "The tissue adhesives that are currently used in surgery, for example for serious skin injuries or liver tears, are toxic to some extent," explains the MedUni Vienna researcher. On the other hand, other adhesives are not strong enough. Biological alternatives would therefore be ideal. The research project should help to find new alternatives and applications for existing adhesive products for skin, cartilage, ligaments and tendons.

Currently 300 Austrian ticks and their "cement" are being analysed and studied at MedUni Vienna. This involves the creatures biting through a skin-like membrane, causing the adhesive to be secreted and cured. During the course of this year, giants ticks are going to be studied for this purpose in South Africa.

Using the adhesive threads of blue mussels, the adhesive molecule of which, DOPA (a modification of the amino acid tyrosine) is already in the preclinical trial phase, an international research group has already succeeded in replicating and producing alternative adhesives. "However, because of its low bonding strength, the DOPA bonding mechanism is not suitable for all medical applications, so that there is still a need for new adhesives," explains Nürnberger. Other potential "adhesive donors" are sea cucumbers, which shoot sticky threads out of their sac; species of salamander, which secrete extremely fast-drying adhesive out of skin glands, if attacked; or insect larvae, which produce tentacles or crabs, which can remain firmly "stuck", even under water.

Email ThisBlogThis!Share to TwitterShare to FacebookShare to Pinterest
Labels: Discovers