A super-material that bends, shapes and focuses sound waves that pass through it has been invented by scientists.

The creation pushes the boundaries of metamaterials – a new class of finely-engineered surfaces that perform nature-defying tasks.

But a research team from the Universities of Sussex and Bristol have now shown that they also work with sound waves, which could transform medical imaging and personal audio.

Finely shaped sound fields are used in medical imaging and therapy as well as in a wide range of consumer products such as audio spotlights and ultrasonic haptics. The research published today (Monday 27 February 2017) in Nature Communications shows a simple and cheap way of creating these shaped sound waves using acoustic metamaterials.


Metamaterial bricks are assembled into a layer to produce a meta-surface, which could have applications across healthcare and entertainment 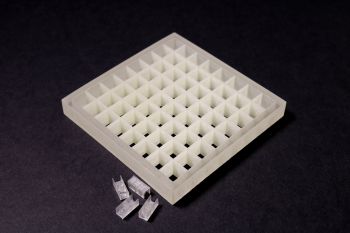 These space coiling bricks act to slow down sound waves, meaning that they can be transformed into any required sound field. 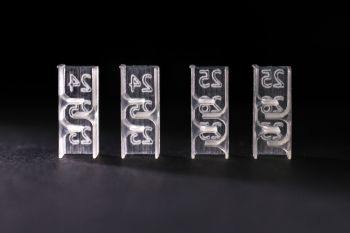 The collaborative research team assembled a metamaterial layer out of lots of small bricks that each coil up space. The space coiling bricks act to slow down the sound meaning that incoming sound waves can be transformed into any required sound field.

The new metamaterial layers could be used in many applications. Large versions could be used to direct or focus sound to a particular location and form an audio hotspot. Much smaller versions could be used to focus high intensity ultrasound to destroy tumours deep within the body. Here, a metamaterial layer could be tailor-made to fit the body of a patient and tuned to focus the ultrasound waves where they are needed most. In both cases the layer could be fitted to existing loudspeaker technology and be made rapidly and cheaply.

Dr Gianluca Memoli, from the Interact Lab at the University of Sussex who led the study, said: “Our metamaterial bricks can be 3D printed and then assembled together to form any sound field you can imagine. We also showed how this can be achieved with only a small number of different bricks. You can think of a box of our metamaterial bricks as a do-it-yourself acoustics kit.

Professor Sriram Subramanian, Head of the Interact Lab at the University of Sussex, added: “We want to create acoustic devices that manipulate sound with the same ease and flexibility with which LCDs and projectors do to light. Our research opens the door to new acoustic devices combining diffraction, scattering and refraction, and enables the future development of fully digital spatial sound modulators, which can be controlled in real time with minimal resources.”

Bruce Drinkwater, Professor of Ultrasonics at the University of Bristol, explained: “In the future I think there will be many exciting applications of this technology. We are now working on making the metamaterial layers dynamically reconfigurable. This will mean we can make cheap imaging systems which could be used either for medical diagnostics or crack detection.”


Contacts and sources:
By: James Hakner
University of Sussex
on February 27, 2017