Stunning Images from 30 Years of Observing Supernova 1987a

Three decades ago, astronomers spotted one of the brightest exploding stars in more than 400 years. The titanic supernova, called Supernova 1987A (SN 1987A), blazed with the power of 100 million suns for several months following its discovery on Feb. 23, 1987.

Since that first sighting, SN 1987A has continued to fascinate astronomers with its spectacular light show. Located in the nearby Large Magellanic Cloud, it is the nearest supernova explosion observed in hundreds of years and the best opportunity yet for astronomers to study the phases before, during, and after the death of a star.


The video begins with a nighttime view of the Small and Large Magellanic clouds, satellite galaxies of our Milky Way. It then zooms into a rich star-birth region in the Large Magellanic Cloud. Nestled between mountains of red-colored gas is the odd-looking structure of Supernova 1987A, the remnant of an exploded star that was first observed in February 1987. The site of the supernova is surrounded by a ring of material that is illuminated by a wave of energy from the outburst. Two faint outer rings are also visible. All three rings existed before the explosion as fossil relics of the doomed star’s activity in its final days.


To commemorate the 30th anniversary of SN 1987A, new images, time-lapse movies, a data-based animation based on work led by Salvatore Orlando at INAF-Osservatorio Astronomico di Palermo, Italy, and a three-dimensional model are being released. By combining data from NASA's Hubble Space Telescope and Chandra X-ray Observatory, as well as the international Atacama Large Millimeter/submillimeter Array (ALMA), astronomers — and the public — can explore SN 1987A like never before.

This Hubble Space Telescope image shows Supernova 1987A within the Large Magellanic Cloud, a neighboring galaxy to our Milky Way. 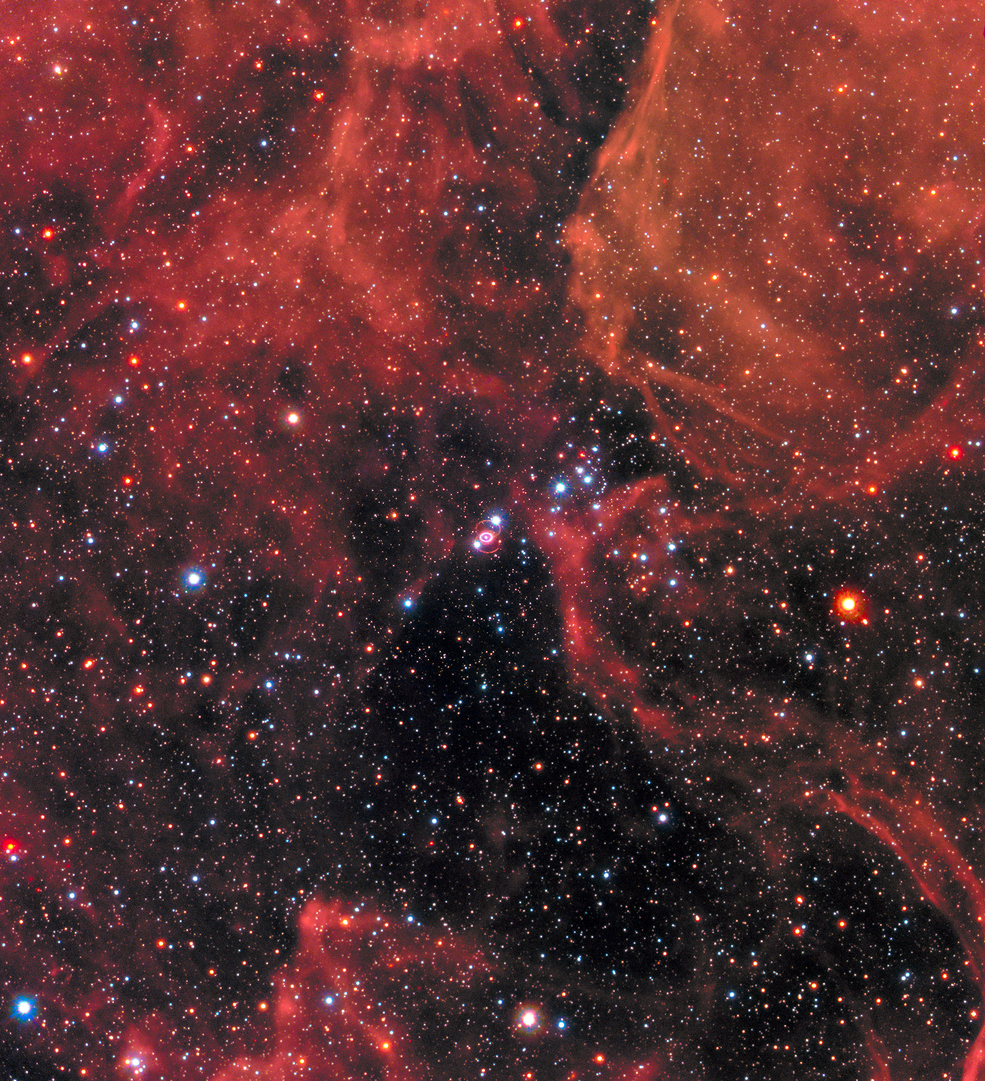 
This time-lapse video sequence of Hubble Space Telescope images reveals dramatic changes in a ring of material around the exploded star Supernova 1987A. The images, taken from 1994 to 2016, show the effects of a shock wave from the supernova blast smashing into the ring. The ring begins to brighten as the shock wave hits it. The ring is about one light-year across.

Hubble has repeatedly observed SN 1987A since 1990, accumulating hundreds of images, and Chandra began observing SN 1987A shortly after its deployment in 1999. ALMA, a powerful array of 66 antennas, has been gathering high-resolution millimeter and submillimeter data on SN 1987A since its inception.

"The 30 years' worth of observations of SN 1987A are important because they provide insight into the last stages of stellar evolution," said Robert Kirshner of the Harvard-Smithsonian Center for Astrophysics in Cambridge, Massachusetts, and the Gordon and Betty Moore Foundation in Palo Alto, California.

The latest data from these powerful telescopes indicate that SN 1987A has passed an important threshold. The supernova shock wave is moving beyond the dense ring of gas produced late in the life of the pre-supernova star when a fast outflow or wind from the star collided with a slower wind generated in an earlier red giant phase of the star's evolution. What lies beyond the ring is poorly known at present, and depends on the details of the evolution of the star when it was a red giant.

This scientific visualization, using data from a computer simulation, shows Supernova 1987A, as the luminous ring of material we see today.

"The details of this transition will give astronomers a better understanding of the life of the doomed star, and how it ended," said Kari Frank of Penn State University who led the latest Chandra study of SN 1987A.

Supernovas such as SN 1987A can stir up the surrounding gas and trigger the formation of new stars and planets. The gas from which these stars and planets form will be enriched with elements such as carbon, nitrogen, oxygen and iron, which are the basic components of all known life. These elements are forged inside the pre-supernova star and during the supernova explosion itself, and then dispersed into their host galaxy by expanding supernova remnants. Continued studies of SN 1987A should give unique insight into the early stages of this dispersal.

Some highlights from studies involving these telescopes include:

Hubble studies have revealed that the dense ring of gas around the supernova is glowing in optical light, and has a diameter of about a light-year. The ring was there at least 20,000 years before the star exploded. A flash of ultraviolet light from the explosion energized the gas in the ring, making it glow for decades.


These images, taken between 1994 and 2016 by NASA's Hubble Space Telescope, chronicle the brightening of a ring of gas around an exploded star. 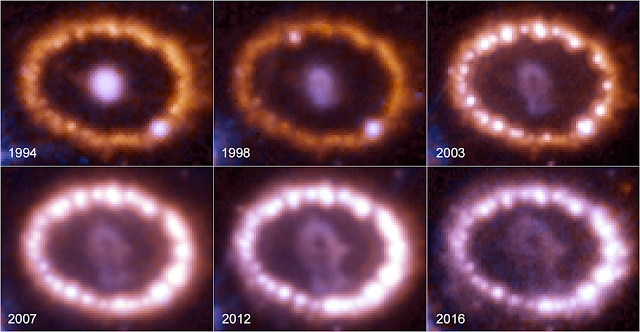 The central structure visible inside the ring in the Hubble image has now grown to roughly half a light-year across. Most noticeable are two blobs of debris in the center of the supernova remnant racing away from each other at roughly 20 million miles an hour.

From 1999 until 2013, Chandra data showed an expanding ring of X-ray emission that had been steadily getting brighter. The blast wave from the original explosion has been bursting through and heating the ring of gas surrounding the supernova, producing X-ray emission.


Astronomers combined observations from three different observatories to produce this colorful, multiwavelength image of the intricate remains of Supernova 1987A. 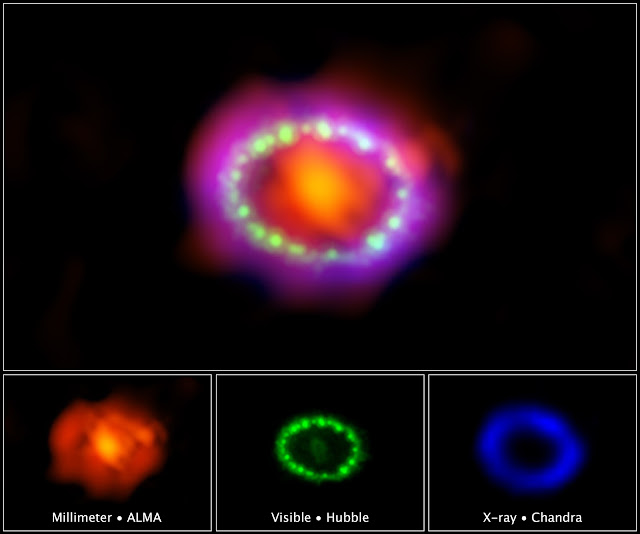 In the past few years, the ring has stopped getting brighter in X-rays. From about February 2013 until the last Chandra observation analyzed in September 2015 the total amount of low-energy X-rays has remained constant. Also, the bottom left part of the ring has started to fade. These changes provide evidence that the explosion's blast wave has moved beyond the ring into a region with less dense gas. This represents the end of an era for SN 1987A.

Beginning in 2012, astronomers used ALMA to observe the glowing remains of the supernova, studying how the remnant is actually forging vast amounts of new dust from the new elements created in the progenitor star. A portion of this dust will make its way into interstellar space and may become the building blocks of future stars and planets in another system.

These observations also suggest that dust in the early universe likely formed from similar supernova explosions.

Astronomers also are still looking for evidence of a black hole or a neutron star left behind by the blast. They observed a flash of neutrinos from the star just as it erupted. This detection makes astronomers quite certain a compact object formed as the center of the star collapsed — either a neutron star or a black hole — but no telescope has uncovered any evidence for one yet.

These latest visuals were made possible by combining several sources of information including simulations by Salvatore Orlando and collaborators that appear in this paper: https://arxiv.org/abs/1508.02275. The Chandra study by Frank et al. can be found online at http://lanl.arxiv.org/abs/1608.02160. Recent ALMA results on SN 87A are available at https://arxiv.org/abs/1312.4086.

The Hubble Space Telescope is a project of international cooperation between NASA and ESA (European Space Agency). NASA's Goddard Space Flight Center in Greenbelt, Maryland, manages the telescope. The Space Telescope Science Institute (STScI) in Baltimore conducts Hubble science operations. STScI is operated for NASA by the Association of Universities for Research in Astronomy, Inc., in Washington.

ALMA is a partnership of ESO (representing its member states), NSF (USA) and NINS (Japan), together with NRC (Canada), NSC and ASIAA (Taiwan), and KASI (Republic of South Korea), in cooperation with the Republic of Chile. The Joint ALMA Observatory is operated by ESO, AUI/NRAO and NAOJ.