Biren Patel, an associate professor of clinical cell and neurobiology at the Keck School of Medicine of USC, has been digging for fossils in a paleontologically rich area of Kashmir in northern India for six years. Although paleontologists have scoured this region for a century, relics of small extinct primates were rarely found or studied.

Scientists named the new species Ramadapis sahnii and said that it existed 11 to 14 million years ago. It is a member of the ancient Sivaladapidae primate family, consumed leaves and was about the size of a house cat, said Patel, co-author of the new study in the Journal of Human Evolution.

The new species Ramadapis sahnii existed 11 to 14 million years ago and is a member of the ancient Sivaladapidae primate family. It consumed leaves and was about the size of a house cat. 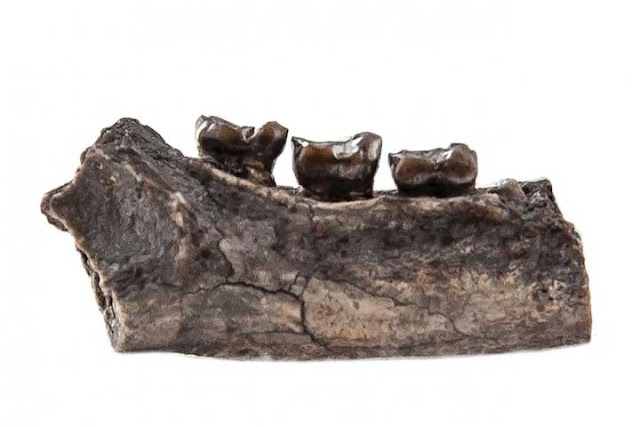 "Among the primates, the most common ones in the Kashmir region are from a genus called Sivapithecus, which were ancestral forms of orangutans," Patel said. "The fossil we found is from a different group on the primate family tree -- one that is poorly known in Asia. We are filling an ecological and biogeographical gap that wasn't really well documented. Every little step adds to the understanding of our human family tree because we're also primates."

"In the past, people were interested in searching for big things -- things they could show off to other people," Patel said. "A lot of the small fossils were not on their radar."

The inch-and-a-quarter partial mandible belongs to a primate weighing less than 11 pounds that had outlived its other adapidae cousins found in North America, Europe and Africa by millions of years.

"New primates are always a hot topic, and this one is the first of its kind from its area in Asia, which has significant consequences for understanding primate evolution in the Old World," said Michael Habib, an assistant professor of clinical cell and neurobiology at the Keck School of Medicine who was not involved in the study.

The question that remains is how the ecosystem in northern India supported this species when its relatives elsewhere were disappearing or had already gone extinct. Future fieldwork and recovering more fossil primates will help answer this question.

"People want to know about human origins, but to fully understand human origins, you need to understand all of primate origins, including the lemurs and these Sivaladapids," Patel said. "Lemurs and sivaladapids are sister groups to what we are -- the anthropoids -- and we are all primates."

Researchers from Hunter College of the City University of New York, New York Consortium in Evolutionary Primatology, Arizona State University, Stony Brook University and Panjab University also contributed to this study, which was supported by the Wenner-Gren Foundation, the American Association of Physical Anthropologists, the Institute of Human Origins and funding from some of the involved universities.