A NIMS-Osaka University joint research team developed a mesh which can be wrapped around injured peripheral nerves to facilitate their regeneration and restore their functions.

This mesh incorporates vitamin B12 -- a substance vital to the normal functioning of nervous systems -- which is very soft and degrades in the body. When the mesh was applied to injured sciatic nerves in rats, it promoted nerve regeneration and recovery of their motor and sensory functions. The team is currently considering clinical application of the mesh to treat peripheral nerve disorders such as carpal tunnel syndrome (CTS). 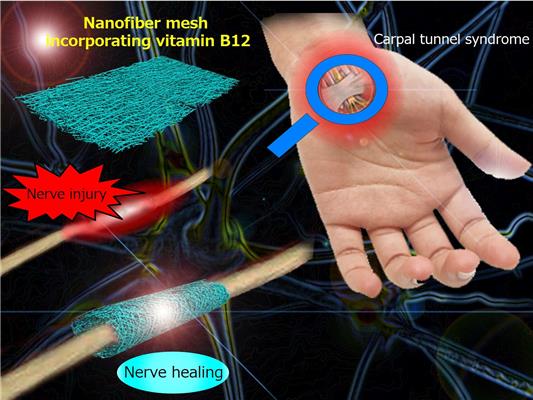 Artificial nerve conduits have been developed in the past to treat peripheral nerve injuries, but they merely form a cross-link to the injury site and do not promote faster nerve regeneration. Moreover, their application is limited to relatively few patients suffering from a complete loss of nerve continuity. Vitamin B12 has been known to facilitate nerve regeneration, but oral administration of it has not proven to be very effective, and no devices capable of delivering vitamin B12 directly to affected sites had been available. Therefore, it had been hoped to develop such medical devices to actively promote nerve regeneration in the many patients who suffer from nerve injuries but have not lost nerve continuity.

The NIMS-Osaka University joint research team recently developed a special mesh that can be wrapped around an injured nerve which releases vitamin B12 (methylcobalamin) until the injury heals. By developing very fine mesh fibers (several hundred nanometers in diameter) and reducing the crystallinity of the fibers, the team successfully created a very soft mesh that can be wrapped around a nerve. This mesh is made of a biodegradable plastic which, when implanted in animals, is eventually eliminated from the body. In fact, experiments demonstrated that application of the mesh directly to injured sciatic nerves in rats resulted in regeneration of axons and recovery of motor and sensory functions within six weeks.

The team is currently negotiating with a pharmaceutical company and other organizations to jointly study clinical application of the mesh as a medical device to treat peripheral nerve disorders, such as CTS.

This research was published online in the April 2017 issue of Acta Biomaterialia on February 5, 2017.