A single drop of seawater can contain a million microorganisms, but these microorganisms have a much bigger influence than their size would imply. For example, microbes influence an ocean’s nutrient and energy cycles, and in turn, these cycles affect atmospheric levels of carbon dioxide, methane, and other gases.

Traditional models of the Earth system do not include the influence of microbes in these cycles. Now, researchers have developed a model that explains key microbial metabolic processes and their influence on greenhouse gas production and consumption in a model marine ecosystem. The new model uses information about the ocean’s geochemistry in combination with genomic and metabolic information about the microbes.

Within the ocean, oxygen-starved zones affect the productivity of fisheries, emissions of greenhouse gases, biodiversity in coastal zones, and more. The results of this work significantly improve the crude models of microbial activity in these important oceanic zones. And, these results not only provide holistic insights into how microbes drive nutrient and energy flow within the oceanic environment but also how they influence the atmospheric ecosystem. 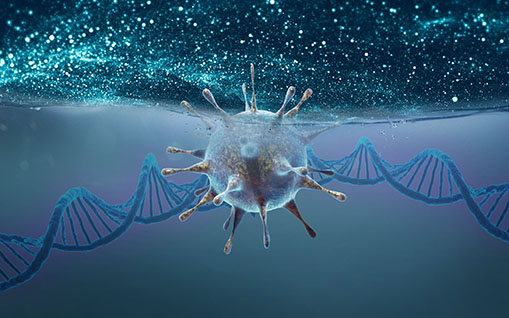 Oxygen minimum zones are widespread areas in the ocean. In these zones, oxygen is depleted due to the metabolic activity of microbes. Rising temperatures drive expansion of oxygen minimum zones, making these areas especially relevant as model ecosystems for climate science. In turn, microbial metabolic networks in these areas are predicted to have a growing influence on nutrient and energy cycling in the ocean.

Moreover, climate models often do not incorporate sufficient information about biogeochemical processes in the ocean. Researchers from the University of British Columbia, University of Minnesota, Canadian Institute for Advanced Research, and Max Planck Institute for Marine Microbiology worked together to develop a biogeochemical model. The model integrates observational geochemical data with metagenomic, metatranscriptomic, and metaproteomic sequence data on the distribution of DNA, messenger RNA (mRNA), and proteins from waters in the Saanich Inlet, British Columbia, Canada.

This site is serving as a model ecosystem for studying key metabolic processes of the oceanic microbial community and their responses to oxygen minimum zone expansion. The team used resources from two U.S. Department of Energy Office of Science user facilities: the DOE Joint Genome Institute and EMSL, the Environmental Molecular Sciences Laboratory. The new model reproduced measured biogeochemical reaction rates as well as DNA, mRNA, and protein concentration profiles at the ecosystem scale.

Contacts and sources:
Department of Energy, Office of Science