Measuring the True Size of Gods and Giants

Archeological artefacts, such as the Jupiter Column of Ladenburg, a town with an impressive Roman history, hold many as yet undiscovered secrets. Discovered in 1973, the history of the monument that is more than 1800 years old is still unclear.

The HEiKA MUSIEKE project is aimed at uncovering some of these secrets and making the cultural heritage of Ladenburg visible and perceptible. For this purpose, modern digitization techniques of Karlsruhe Institute of Technology (KIT) are used.

“Contact-free digitization of objects opens up new approaches to research,” Dr. Thomas Vögtle of KIT’s Institute of Photogrammetry and Remote Sensing says. The Jupiter Column is about four meters high and combines Roman and Germanic symbols and conceptions. The figures on the column represent the battle between the Roman god Jupiter and a giant. The texture of the column and the equestrian figure, however, appear to follow Celtic tradition. “The digital model makes archeologists and laymen experience the artefact in an entirely new way.”

Digitization of the Jupiter Column makes this cultural heritage perceptible by both archaeologists and laymen. 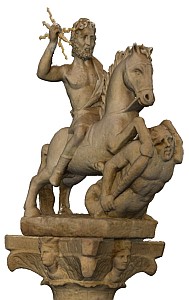 
To model the three-dimensional structure of the column on the computer, the KIT team uses a professional, commercially available digital single-lens reflex camera of 36 megapixels resolution with conventional illumination technology. “Our hardware is robust and mobile so that we can collect our data easily, rapidly, and at low costs at any place,” Vögtle explains.

On a single working day, the team took about 800 photos of the column from all perspectives. On the computer, characteristic features of the column were identified and interlinked in the different images. Information of the two-dimensional photos was processed to yield a photorealistic, three-dimensional model. Using this model, hardly visible structures can be seen with the bare eye. “The computer model then is the basis for further work of archeologists.”

“Digital objects may also provide laymen with a new experience of cultural heritage,” Dr. Ralf Schneider of ZAK I Center for Cultural and General Studies of KIT says. He coordinates the HEiKA-MUSIEKE – Multidimensional Perceptibility of Cultural Heritage project. Large parts of our cultural heritage have long been lost from our world of interest. With the help of digital methods, cultural heritage can be acquired, analyzed, and presented to a broader public in a new way, in a context that is also understandable by laymen.

The Jupiter Column from Ladenburg.

The MUSIEKE project combines archeology, remote sensing, forensic computer science, geoinformatics, and applied cultural science to make cultural heritage perceptible. Apart from the digitization of artefacts, it also covers the generation of databases with geoinformation or production of digital maps of various historic stages of settlements and cities.

Vögtle normally uses photogrammetry and digitization methods for technical purposes. Based on aerial photos, he determines the orientation of roofs in cities for finding out whether they are suited for the installation of solar facilities. In industrial production, camera photos are used to find out whether the product was produced with the required accuracy and can be used in the next production stage or needs to be adjusted. Or the progress of construction of an underground station can be compared with the planned target. “In production or in the construction sector in particular, objects have to be measured in a contact-free, automatic, and rapid way. Cameras and digitization are very valuable tools for this purpose,” Vögtle says.