Mainly Men Migrated from the Pontic Steppe To Europe 5,000 Years Ago According to Genetic Data

A new study, looking at the sex-specifically inherited X chromosome of prehistoric human remains, shows that hardly any women took part in the extensive migration from the Pontic-Caspian Steppe approximately 5,000 years ago. The great migration that brought farming practices to Europe 4,000 years earlier, on the other hand, consisted of both women and men. The difference in sex bias suggests that different social and cultural processes drove the two migrations.

Genetic data suggest that modern European ancestry represents a mosaic of ancestral contributions from multiple waves of prehistoric migration events. Recent studies of genomic variation in prehistoric human remains have demonstrated that two mass migration events are particularly important to understanding European prehistory: the Neolithic spread of agriculture from Anatolia starting around 9,000 years ago, and migration from the Pontic-Caspian Steppe around 5,000 years ago. These migrations are coincident with large social, cultural, and linguistic changes, and each has been inferred to have replaced more than half of the contemporaneous gene pool of resident Central Europeans.

The Pontic–Caspian steppe, or Ukrainian steppe is the vast steppeland stretching from the northern shores of the Black Sea (called Euxeinos Pontos in antiquity) as far east as the Caspian Sea, from Moldova and western Ukraine across the Southern Federal District and the Volga Federal District of Russia to western Kazakhstan, forming part of the larger Eurasian steppe, adjacent to the Kazakh steppe to the east. It is a part of the Palearctic temperate grasslands, savannas, and shrublands ecoregion of the temperate grasslands, savannas, and shrublands biome.

The area corresponds to Cimmeria, Scythia, and Sarmatia of classical antiquity. Across several millennia the steppe was used by numerous tribes of nomadic horsemen, many of which went on to conquer lands in the settled regions of Europe and in western and southern Asia.

The steppe extends roughly from the Dniepr to the Ural or 30° to 55° east longitude, and from the Black Sea and the Caucasus in the south to the temperate forest and taiga in the north, or 45° to 55° north latitude. 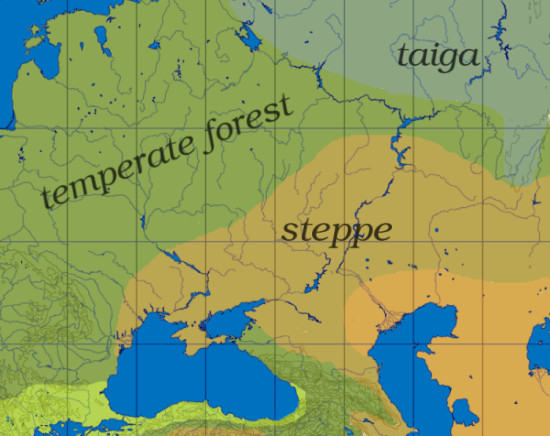 Dramatic events in human prehistory can be investigated using patterns of genetic variation among the people that lived in those times. In particular, studies of differing female and male demographic histories on the basis of ancient genomes can provide information about complexities of social structures and cultural interactions in prehistoric populations.

Researchers from Uppsala and Stanford University investigated the genetic ancestry on the sex-specifically inherited X chromosome and the autosomes in 20 early Neolithic and 16 Late Neolithic/Bronze Age human remains. Contrary to previous hypotheses suggesting patrilocality (social system in which a family resides near the man's parents) of many agricultural populations, they found no evidence of sex-biased admixture during the migration that spread farming across Europe during the early Neolithic.

For later migrations from the Pontic steppe during the early Bronze Age, however, we find a dramatic male bias. There are simply too few X-chromosomes from the migrants, which points to around ten migrating males for every migrating female, says Mattias Jakobsson, professor of Genetics at the Department of Organismal Biology, Uppsala University.

The research group found evidence of ongoing, primarily male, migration from the steppe to central Europe over a period of multiple generations, with a level of sex bias that excludes a pulse migration during a single generation.

The contrasting patterns of sex-specific migration during these two migrations suggest a view of differing cultural histories in which the Neolithic transition was driven by mass migration of both males and females in roughly equal numbers -- perhaps whole families -- whereas the later Bronze Age migration and cultural shift were instead driven by male migration.