A recent first-of-its-kind analysis of wildfire records over 20 years shows that human-started fires accounted for 84 percent of all wildfires, tripled the length of the fire season and dominated an area seven times greater than that affected by lightning-caused fires. Humans have "a remarkable influence" on modern U.S. wildfire regimes, they conclude.

They found that of the 1.5 million fires that required fire fighting between 1992-2012, human-caused fires accounted for almost half, 44 percent, of area burned. The researchers note that humans are expanding the "fire niche," a measure of ignition sources, fuel mass and dryness. Bradley explains, "Humans are expanding fires into more locations and environmental conditions than lightning is able to reach."


In an analysis of 20 years of wildfire records led by researchers at UMass Amherst and the University of Colorado-Boulder, they found human-started fires accounted for 84 percent of all wildfires, exhibiting 'a remarkable influence' on modern US wildfire regimes. Further, humans are expanding the fire niche into more locations and environments with historically low lightning-strike density. 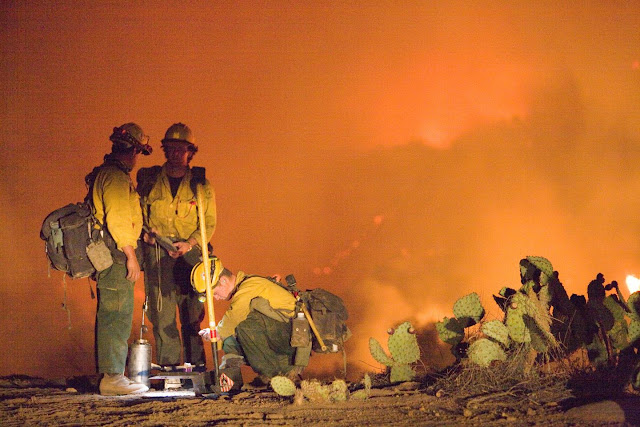 Bradley, Balch and colleagues suggest, "National and regional policy efforts to mitigate wildfire related hazards would benefit from focusing on reducing the human expansion of the fire niche." Further, they note that because the wildland-urban interface - houses intermingling with natural areas - is expected to double by 2030 from 9 percent of total U.S. land area now, "ignition pressure" and structure vulnerability will rise.

Bradley says, "It's generally pretty well known that people start a lot of fires; everything from campfires to burning yard waste to accidental fires in homes and other structures. But in the past, I used to think of 'wildfire' as a process that was primarily natural and driven by lightning. This analysis made me realize that human ignitions have an extraordinary impact on national fire regimes. From our analysis, we learned that human-started fires are amazingly common. We found that humans play a primary role in redistributing wildfires in space and over time."

Further, "It turns out that lightning-started fires happen primarily in the inter-mountain west and almost exclusively in the summer, whereas human-started fires happen pretty much everywhere and extend the fire season far into the spring and fall. Our paper is the first to document the remarkable influence of human ignitions on 'wildfire.' Since we humans are the source of most fires, we are also the solution to reducing the number of costly and damaging fires."

The research team, which included others from UMass Amherst, the Earth Lab and department of geography at the University of Colorado-Boulder and the University of Idaho, point out that "economic and ecological costs of wildfire in the United States have risen substantially in recent decades. While climate change has likely enabled a portion of the increase in wildfire activity, the direct role of people in increasing wildfire has been largely overlooked" until now.

Bradley says, "We saw significant increases in the numbers of large, human-started fires over time, especially in the spring. I think that's interesting, and scary, because it suggests that as spring seasons get warmer and earlier due to climate change, human ignitions are putting us at increasing risk of some of the largest, most damaging wildfires."

Balch says, "The hopeful news here is that we could, in theory, reduce human-started wildfires in the medium term. But at the same time, we also need to focus on living more sustainably with fire by shifting the human contribution to ignitions to more controlled, well-managed burns."

For this study, the researchers used the publicly available U.S. Forest Service's Fire Program Analysis-Fire-Occurrence Database, which includes federal, state and local wildfire records on public and private lands from 1992-2012. They did not include prescribed burns or agricultural fires. Earlier studies had focused only on the West, for example, or records from just one agency. Fire causes include arson, smoking, railroads, fireworks and children as well as campfires and burning debris.

To assess 20-year trends in human- vs. lightning-caused wildfires over time, they used only large fires that were independently verified by a multi-agency project providing consistent burn severity data and fire perimeter information to researchers and relevant agencies.