Human Brains Could Evolve to Require Very Little Sleep, Just Like The Cavefish

We all do it; we all need it – humans and animals alike. Sleep is an essential behavior shared by nearly all animals and disruption of this process is associated with an array of physiological and behavioral deficits. Although there are so many factors contributing to sleep loss, very little is known about the neural basis for interactions between sleep and sensory processing.

Neuroscientists at Florida Atlantic University have been studying Mexican cavefish to provide insight into the evolutionary mechanisms regulating sleep loss and the relationship between sensory processing and sleep. They are investigating how sleep evolves and using this species as a model to understand how human brains could evolve to require very little sleep, just like the cavefish

The Pachón cavefish live in deep, dark caves in central Mexico, with little food, oxygen or light, and have lost their eyes completely. Because of their harsh environment, they have evolved to get very creative in order to survive and suppress sleep. They are able to find their way around by means of their lateral lines, which are highly sensitive to fluctuating water pressure. 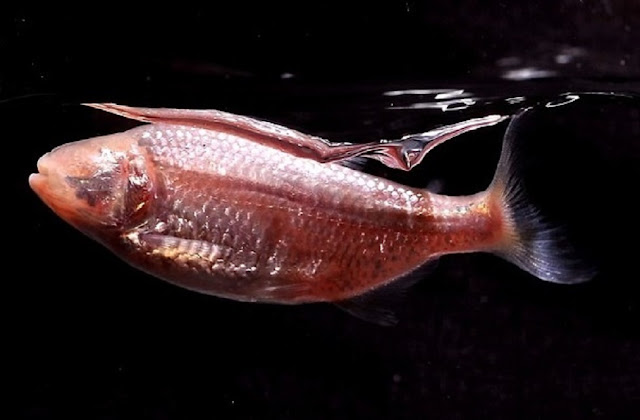 In their latest study, just published in the Journal of Experimental Biology, findings suggest that an inability to block out your environment is one of the ways to lose sleep. The study also provides a model for understanding how the brain’s sensory systems modulate sleep and sheds light into the evolution of the significant differences in sleep duration observed throughout the animal kingdom.

“Animals have dramatic differences in sleep with some sleeping as much as 20 hours and others as little as two hours and no one knows why these dramatic differences in sleep exist,” said Alex C. Keene, Ph.D., corresponding author of the study and an associate professor in the Department of Biological Sciences in FAU’s Charles E. Schmidt College of Science. “Our study suggests that differences in sensory systems may contribute to this sleep variability. It is possible that evolution drives sensory changes and changes in sleep are a secondary consequence, or that evolution selects for changes in sensory processing in order to change sleep.”

Because the cave environment differs dramatically from the rivers inhabited by surface fish, cavefish have evolved robust differences in foraging and feeding behavior, raising the possibility that differences in nutrient availability contribute to the evolution of sleep loss in cave populations. Furthermore, multiple cave populations have evolved substantial reductions in sleep duration and enhanced sensory systems, suggesting that sleep loss is evolutionary and functionally associated with sensory and metabolic changes.

Key findings of the study have shown that the evolution of enhanced sensory capabilities contribute to sleep loss in cavefish and that sleep in cavefish is plastic and may be regulated by seasonal changes in food availability.

There are more than 29 different populations of cavefish and many of them evolved independently. This enabled the researchers to determine whether evolution occurs through the same or different mechanisms. The Pachon cavefish, the population they studied, appear to have lost sleep due to increased sensory input, but not the other populations.

“We were surprised to find that there are multiple independent mechanisms regulating sleep loss in different cave populations and this can be a significant strength moving forward,” said James Jaggard, first author and a graduate student at FAU working with Keene. “This means that there are many different ways to lose sleep or evolve a brain that sleeps less and we are going to search to identify these mechanisms.”

Keene, Jaggard and their colleagues use Mexican cavefish because they are a powerful system for examining trait evolution. In earlier research studies, they observed the evolutionary convergence on sleep loss in these fish. However, the neural mechanisms underlying this dramatic behavioral shift remained elusive. Since they already knew that cavefish also had evolved a highly sensitive lateral line (the groups of sensory neurons that line the body of the fish), they wondered if an increase in sensory input from these neurons contribute to sleep loss.

For the study, the researchers recorded the cavefish under infrared light set up in individual tanks. They automated video-tracking software that told them when the fish were inactive and they defined sleep as one minute of immobility because it correlated with changes in arousal threshold.

“Humans block out sensory cues when we enter a sleep-like state,” said Keene. “For example, we close our eyes and there are mechanisms in the brain to reduce auditory input. This is one of the reasons why a sensory stimuli like someone entering a room is less likely to get your attention if you are asleep. Our thinking was that cavefish have to some degree lost this ability and this drives sleep loss.”

The researchers recently generated transgenic fish lines and they will be able to image brain activity and genetically map anatomical differences between the Mexican cavefish populations.

This study is supported by a grant from the National Science Foundation (1601004).