Today's Earth is a dynamic planet with an outer layer composed of giant plates that grind together, sliding past or dipping beneath one another, giving rise to earthquakes and volcanoes. Others separate at undersea mountain ridges, where molten rock spreads out from the centers of major ocean basins.

But new research suggests that this was not always the case. Instead, shortly after Earth formed and began to cool, the planet's first outer layer was a single, solid but deformable shell. Later, this shell began to fold and crack more widely, giving rise to modern plate tectonics.


The outer layer of modern Earth is a collection of interlocking rigid plates, as seen in this illustration. These plates grind together, sliding past or dipping beneath one another, giving rise to earthquakes and volcanoes. But new research suggests that plate tectonics did not begin until much later in Earth's history. 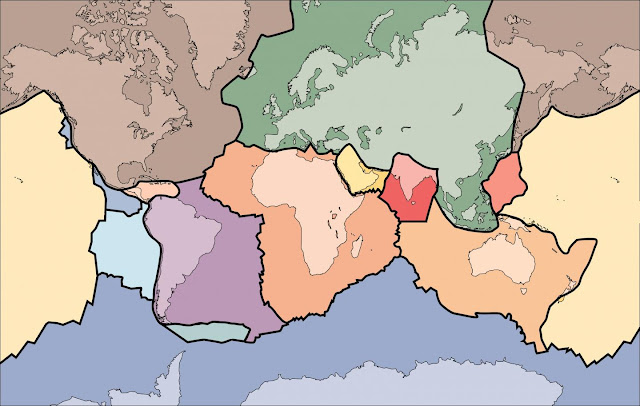 The research, described in a paper published February 27, 2017 in the journal Nature, is the latest salvo in a long-standing debate in the geological research community: did plate tectonics start right away--a theory known as uniformitarianism--or did Earth first go through a long phase with a solid shell covering the entire planet? The new results suggest the solid shell model is closest to what really happened.

"Models for how the first continental crust formed generally fall into two groups: those that invoke modern-style plate tectonics and those that do not," said Michael Brown, a professor of geology at the University of Maryland and a co-author of the study. "Our research supports the latter--a 'stagnant lid' forming the planet's outer shell early in Earth's history."

To reach these conclusions, Brown and his colleagues from Curtin University and the Geological Survey of Western Australia studied rocks collected from the East Pilbara Terrane, a large area of ancient granitic crust located in the state of Western Australia. Rocks here are among the oldest known, ranging from 3.5 to about 2.5 billion years of age. (Earth is roughly 4.5 billion years old.) The researchers specifically selected granites with a chemical composition usually associated with volcanic arcs--a telltale sign of plate tectonic activity.

Brown and his colleagues also looked at basalt rocks from the associated Coucal formation. Basalt is the rock produced when volcanoes erupt, but it also forms the ocean floor, as molten basalt erupts at spreading ridges in the center of ocean basins. In modern-day plate tectonics, when ocean floor basalt reaches the continents, it dips--or subducts--beneath the Earth's surface, where it generates fluids that allow the overlying mantle to melt and eventually create large masses of granite beneath the surface.

Previous research suggested that the Coucal basalts could be the source rocks for the granites in the Pilbara Terrane, because of the similarities in their chemical composition. Brown and his collaborators set out to verify this, but also to test another long-held assumption: could the Coucal basalts have melted to form granite in some way other than subduction of the basalt beneath Earth's surface? If so, perhaps plate tectonics was not yet happening when the Pilbara granites formed.

To address this question, the researchers performed thermodynamic calculations to determine the phase equilibria of average Coucal basalt. Phase equilibria are precise descriptions of how a substance behaves under various temperature and pressure conditions, including the temperature at which melting begins, the amount of melt produced and its chemical composition.

For example, one of the simplest phase equilibria diagrams describes the behavior of water: at low temperatures and/or high pressures, water forms solid ice, while at high temperatures and/or low pressures, water forms gaseous steam. Phase equilibria gets a bit more involved with rocks, which have complex chemical compositions that can take on very different mineral combinations and physical characteristics based on temperature and pressure.

"If you take a rock off the shelf and melt it, you can get a phase diagram. But you're stuck with a fixed chemical composition," Brown said. "With thermodynamic modeling, you can change the composition, pressure and temperature independently. It's much more flexible and helps us to answer some questions we can't address with experiments on rocks."

More to the point, this transformation could have occurred in a pressure and temperature scenario consistent with a "stagnant lid," or a single shell covering the entire planet.

Plate tectonics substantially affects the temperature and pressure of rocks within Earth's interior. When a slab of rock subducts under the Earth's surface, the rock starts off relatively cool and takes time to gain heat. By the time it reaches a higher temperature, the rock has also reached a significant depth, which corresponds to high pressure--in the same way a diver experiences higher pressure at greater water depth.

In contrast, a "stagnant lid" regime would be very hot at relatively shallow depths and low pressures. Geologists refer to this as a "high thermal gradient."

"Our results suggest the Pilbara granites were produced by melting of the Coucal basalts or similar materials in a high thermal gradient environment," Brown said. "Additionally, the composition of the Coucal basalts indicates that they, too, came from an earlier generation of source rocks. We conclude that a multi-stage process produced Earth's first continents in a 'stagnant lid' scenario before plate tectonics began."

This work was supported by The Institute of Geoscience Research at Curtin University, Perth, Australia. The content of this article does not necessarily reflect the views of this organization.
on February 27, 2017