A team of researchers, led by the University of Minnesota, has invented a new technology to produce automobile tires from trees and grasses in a process that could shift the tire production industry toward using renewable resources found right in our backyards. The discovery could have major impact on the multi-billion dollar tire industry

Conventional car tires are viewed as environmentally unfriendly because they are predominately made from fossil fuels. The car tires produced from biomass that includes trees and grasses would be identical to existing car tires with the same chemical makeup, color, shape, and performance. 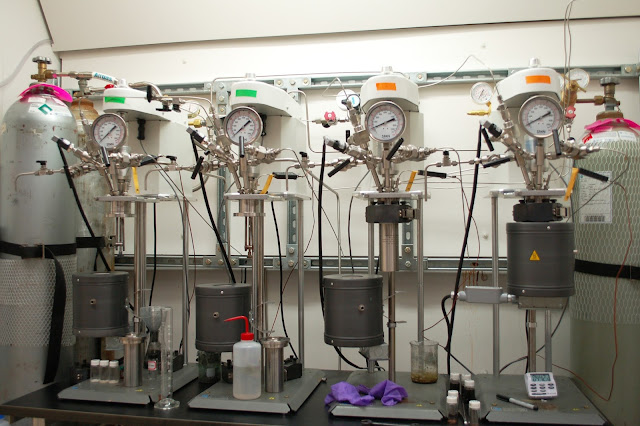 “Our team created a new chemical process to make isoprene, the key molecule in car tires, from natural products like trees, grasses, or corn,” said Paul Dauenhauer, a University of Minnesota associate professor of chemical engineering and materials science and lead researcher of the study. “This research could have a major impact on the multi-billion dollar automobile tires industry.”

“Collaboration was really the key to this research taking biomass all the way to isoprene,” said Carol Bessel, the deputy director for the chemistry division at the National Science Foundation (NSF), which funds the Center for Sustainable Polymers. “This collaboration and synergy among researchers with different approaches and skills is really what we are trying to promote within the NSF Centers for Chemical Innovation Program.”

Currently, isoprene is produced by thermally breaking apart molecules in petroleum that are similar to gasoline in a process called “cracking.” The isoprene is then separated out of hundreds of products and purified. In the final step, the isoprene is reacted with itself into long chains to make a solid polymer that is the major component in car tires.

Biomass-derived isoprene has been a major initiative of tire companies for the past decade, with most of the effort focused on fermentation technology (similar to ethanol production). However, renewable isoprene has proven a difficult molecule to generate from microbes, and efforts to make it by an entirely biological process have not been successful.

Funded by NSF, researchers from the Center for Sustainable Polymers have focused on a new process that begins with sugars derived from biomass including grasses, trees and corn. They found that a three-step process is optimized when it is “hybridized,” meaning it combines biological fermentation using microbes with conventional catalytic refining that is similar to petroleum refining technology.

The first step of the new process is microbial fermentation of sugars, such as glucose, derived from biomass to an intermediate, called itaconic acid. In the second step, itaconic acid is reacted with hydrogen to a chemical called methyl-THF (tetrahydrofuran). This step was optimized when the research team identified a unique metal-metal combination that served as a highly efficient catalyst.

The process technology breakthrough came in the third step to dehydrate methyl-THF to isoprene. Using a catalyst recently discovered at the University of Minnesota called P-SPP (Phosphorous Self-Pillared Pentasil), the team was able to demonstrate a catalytic efficiency as high as 90 percent with most of the catalytic product being isoprene. By combining all three steps into a process, isoprene can be renewably sourced from biomass.

“The performance of the new P-containing zeolite catalysts such as S-PPP was surprising,” says Dauenhauer. “This new class of solid acid catalysts exhibits dramatically improved catalytic efficiency and is the reason renewable isoprene is possible.”

“Economically bio-sourced isoprene has the potential to expand domestic production of car tires by using renewable, readily available resources instead of fossil fuels,” said Frank Bates, a world-renowned polymer expert and University of Minnesota Regents Professor of Chemical Engineering and Materials Science. “This discovery could also impact many other technologically advanced rubber-based products.”

In addition to Professor Dauenhauer, researchers who were part of the study from the University of Minnesota were professors Michael Tsapatsis and Kechun Zhang, postdoctoral researchers Omar Abdelrahman, Dae Sung Park, Charles Spanjers and Limin Ren, and current student Katherine Vinter. University of Massachusetts Amherst professor Wei Fan and student Hong Je Cho were also part of the research team.

The invention of renewable tire technology is part of a larger mission of the Center for Sustainable Polymers, an NSF-funded Center for Chemical Innovation led by the University of Minnesota. Initiated in 2009, the CSP has focused on transforming how plastics are made and unmade through innovative research. Researchers aim to design, prepare and implement polymers derived from renewable resources for a wide range of advanced applications.

Contacts and sources:
University of Minnesota College of Science and Engineering
on February 22, 2017