Brain Sync: Headband Measures How Our Minds Align When We Communicate

Great ideas so often get lost in translation -- from the math teacher who can't get through to his students, to a stand-up comedian who bombs during an open mic night.

But how can we measure whether our audiences understand what we're trying to convey? And better yet, how can we improve that exchange?

Drexel University biomedical engineers, in collaboration with Princeton University psychologists, are using a wearable brain-imaging device to see just how brains sync up when humans interact. It is one of many applications for this functional near-infrared spectroscopy (or fNIRS) system, which uses light to measure neural activity during real-life situations and can be worn like a headband.

This is a cartoon image of brain 'coupling' during communication 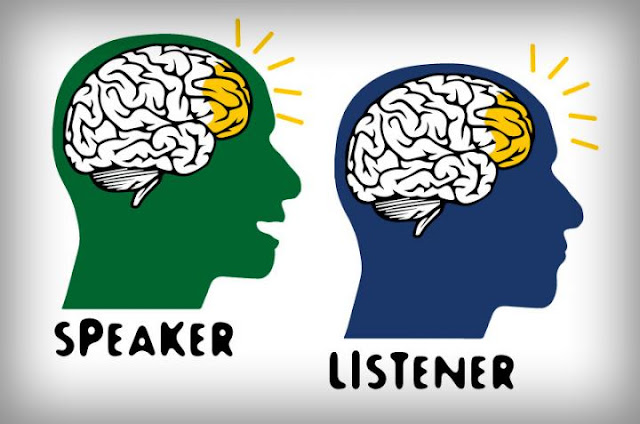 
Published in Scientific Reports on February 27th, 2017, a new study shows that the fNIRS device can successfully measure brain synchronization during conversation. The technology can now be used to study everything from doctor-patient communication, to how people consume cable news.

"Being able to look at how multiple brains interact is an emerging context in social neuroscience," said Hasan Ayaz, PhD, an associate research professor in Drexel's School of Biomedical Engineering, Science and Health Systems, who led the research team. "We live in a social world where everybody is interacting. And we now have a tool that can give us richer information about the brain during everyday tasks -- such as natural communication -- that we could not receive in artificial lab settings or from single brain studies."

The current study is based on previous research from Uri Hasson, PhD, associate professor at Princeton University, who has used functional Magnetic Resonance Imaging (fMRI) to study the brain mechanisms underlying the production and comprehension of language. Hasson has found that a listener's brain activity actually mirrors the speaker's brain when he or she is telling story about a real-life experience. And higher coupling is associated with better understanding.

However, traditional brain imaging methods have certain limitations. In particular, fMRI requires subjects to lie down motionlessly in a noisy scanning environment. With this kind of set-up, it is not possible to simultaneously scan the brains of multiple individuals who are speaking face-to-face.

This is why the Drexel researchers sought to investigate whether the portable fNIRS system could be a more effective approach to probe the brain-to-brain coupling question in natural settings.

For their study, a native English speaker and two native Turkish speakers told an unrehearsed, real-life story in their native language. Their stories were recorded and their brains were scanned using fNIRS. Fifteen English speakers then listened to the recording, in addition to a story that was recorded at a live storytelling event.

The researchers targeted the prefrontal and parietal areas of the brain, which include cognitive and higher order areas that are involved in a person's capacity to discern beliefs, desires and goals of others. They hypothesized that a listener's brain activity would correlate with the speaker's only when listening to a story they understood (the English version). A second objective of the study was to compare the fNIRS results with data from a similar study that had used fMRI, in order to compare the two methods.

They found that when the fNIRS measured the oxygenation and deoxygenation of blood cells in the test subject's brains, the listeners' brain activity matched only with the English speakers. These results also correlated with the previous fMRI study.

This new research supports fNIRS as a viable future tool to study brain-to-brain coupling during social interaction. The system can be used to offer important information about how to better communicate in many different environments, including classrooms, business meetings, political rallies and doctors' offices.

"This would not be feasible with fMRI. There are too many challenges," said Banu Onaral, PhD, the H. H. Sun Professor in the School of Biomedical Engineering, Science and Health Systems. "Now that we know fNIRS is a feasible tool, we are moving into an exciting era when we can know so much more about how the brain works as people engage in everyday tasks."

This study was conducted at the Cognitive Neuroengineering and Quantitative Experimental Research (CONQUER) Collaborative, a multi-disciplinary brain observatory at Drexel University.