$100 Trillion Argument for a World Without Borders

In an ideal world, we would all be able to freely move wherever we wanted. The basic right of people to escape from war, persecution and poverty would be accepted as a given, and no one would have their life determined by their place of birth.

But we don’t live in this world, and national borders continue to block the freedom of people to move. Around the world, protectionism is on the rise, as people are told to blame outsiders for threatening their way of life and, more importantly, stealing their jobs.

There is, however, an overwhelming case for open borders that can be made even in the traditionally self-interested language of economics. In fact, our best estimates are that opening the world’s borders could increase global GDP by US$100 trillion. 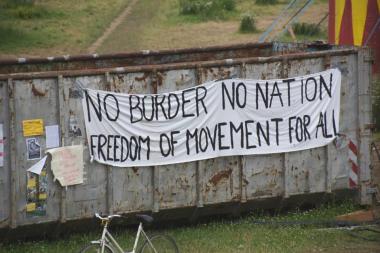 It sounds like a crazy idea, particularly when the media is dominated by stories about the need to control immigration and the right-wing tabloids trumpet “alternative facts” about how immigration hurts our economies. But every piece of evidence we have says that ending borders would be the single easiest way to improve the living standards of workers around the world – including those in wealthy countries.

The argument is simple enough and has been made by more than one economist. Workers in poorer economies make less than they should. If they were to have all of the benefits of rich countries – advanced education, the latest workplace technologies, and all the necessary infrastructure – these workers would produce and earn as much as their rich country counterparts. What keeps them in poverty is their surroundings. If they were able to pick up and move to more productive areas, they would see their incomes increase many times over.

This means that opening borders is, by a massive amount, the easiest and most effective way to tackle global poverty. Research shows that alternative approaches – for instance, microcredit, higher education standards, and anti-sweatshop activism – all produce lifetime economic gains that would be matched in weeks by open borders. Even small reductions in the barriers posed by borders would bring massive benefits for workers.

Of course, the immediate fear of having open borders is that it will increase competition for jobs and lower wages for those living in rich countries. This misses the fact that globalisation means competition already exists between workers worldwide – under conditions that harm their pay and security. UK workers in manufacturing or IT, for instance, are already competing with low-wage workers in India and Vietnam. Workers in rich countries are already losing, as companies eliminate good jobs and move their factories and offices elsewhere.

Under these circumstances, the function of borders is to keep workers trapped in low-wage areas that companies can freely exploit. Every worker – whether from a rich country or a poor country – suffers as a result. Ending borders would mean an end to this type of competition between workers. It would make us all better off.

The European Union has provided a natural experiment in what happens when borders between rich and poor countries are opened up. And the evidence here is unambiguous: the long-run effects of open borders improve the conditions and wages of all workers. However, in the short-run, some groups (particularly unskilled labourers) can be negatively affected.

The fixes for this are exceedingly simple though. A shortening of the work week would reduce the amount of work supplied, spread the work out more equally among everyone, and give more power to workers – not to mention, more free time to everyone. And the strengthening and proper enforcement of labour laws would make it impossible for companies to hyper-exploit migrant workers. The overall impacts of more workers are exceedingly small in the short-run, and exceedingly positive in the long-run.

As it stands, borders leave workers stranded and competing against each other. The way the global economy is set up is based entirely on competition. This makes us think that potential allies are irreconcilable enemies. The real culprits, however, are businesses that pick up and leave at the drop of a hat, that fire long-time workers in favour of cheaper newcomers, and that break labour laws outright, in order to boost their profits.

Borders leave us as strangers rather than allies. Yet this need not be the case, and as a principle guiding political action, the abolition of borders would rank among the greatest of human achievements.

This article was originally published on The Conversation. Read the original article.
on February 20, 2017