Today, more than 16 years of space-weather data is publicly available for the first time in history. The data com

es from space-weather sensors on board the nation’s Global Positioning System (GPS) satellites.

The newly available data gives researchers a treasure trove of measurements they can use to better understand how space weather works and how best to protect critical infrastructure, such as the nation’s satellites, aircraft, communications networks, navigation systems, and electric power grid.

A feature article providing an overview of the data that have been released was published today in Space Weather, a journal of the American Geophysical Union.

“Space-weather monitoring instruments developed at Los Alamos have been fielded on GPS satellites for decades,” said Marc Kippen, program manager at Los Alamos National Laboratory in New Mexico, which developed the space weather sensors. “Today, 23 of the nation’s more than 30 on-orbit GPS satellites carry these instruments. When you multiply the number of satellites collecting data with the number of years they’ve been doing it, it totals more than 167 satellite years. It’s really an unprecedented amount of information.”

An image illustrating the six orbital planes in which GPS satellites (“navigational satellites,” or ns) fly around Earth. This configuration shows the orbits just before the start of this solar cycle’s biggest geomagnetic storm, which occurred on March 17, 2015. The darkest orbital lines indicate the position of the satellites in that moment; the lightest lines indicate where they were 12 hours prior. 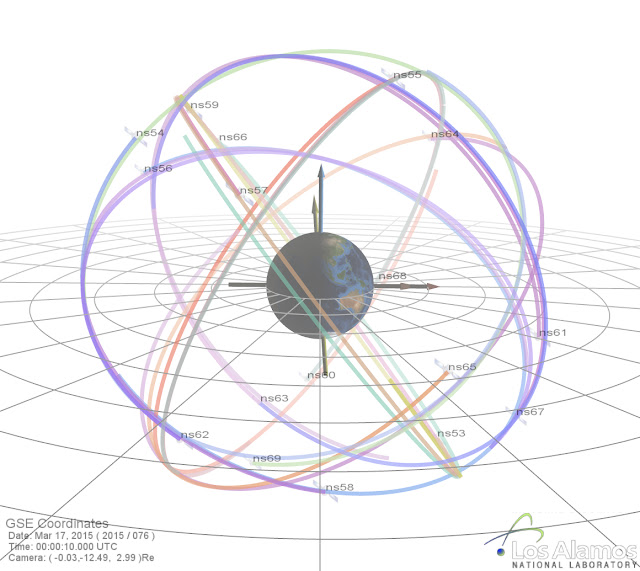 Extreme space-weather events have the potential to significantly threaten safety and property on Earth, in the air, and in space. For example, the hazard of increased radiation exposure from charged particles released during a large solar flare could require that flights be diverted away from a polar route. Similarly, sudden bursts of plasma and magnetic field structures (coronal mass ejections, or CMEs) from the sun’s atmosphere and high-speed solar wind could significantly disable large portions of the electric power grid. The resulting cascading failures could disturb air traffic control, disrupt the water supply, and interfere with life-saving medical devices.

In space, the charged particles measured by the Los Alamos-GPS sensors are the primary limit on how long a satellite can operate in space before succumbing to the damaging effects of radiation. In extreme events those particles can cause malfunction of satellites or even catastrophic failure of entire satellite systems. For example, in April 2010, a large magnetic disturbance resulted in a communications failure, causing a satellite to uncontrollably drift in space and presenting a hazard to nearby satellites.

Currently, scientists are unable to predict when these extreme events will occur, how strong they will be, or how severe the effects will be. The release of Los Alamos-GPS data enables new studies that will help answer these questions.

Each of the 23 sensors in the current GPS constellation makes detailed measurements of the belts every six hours. Together the sensors provide 92 complete measurements of the belts every day. The newly released measurements constitute a nearly continuous global record of the variability in this radiation belt for the past 16 years, including how it responds to solar storms. The data provides an invaluable record for understanding radiation-belt variability that is key to developing effective space-weather forecasting models.

Los Alamos has been anticipating greater awareness of the nation’s vulnerability to space weather since the 1990s, when it began aligning its space-weather research activities with its critical-infrastructure program. “This led to an awareness that we could expand the utility of our space-weather data to programs beyond the specific requirements they were designed for,” said Kippen, a co-author of the feature article.

The public release of GPS energetic-particle data was conducted under the terms of an October 2016 White House Executive Order. It culminates years of work between the Office of Science and Technology Policy and the National Security Council to coordinate interagency efforts aimed at improved understanding, prediction and preparedness for potentially devastating space-weather events. The specific goal of releasing space-weather data from national-security assets such as GPS satellites is to enable broad scientific community engagement in enhancing space-weather model validation and improvements in space-weather forecasting and situational awareness.

“The US DoD, the Office of Science Technology Policy, and the broader space weather enterprise deserve our support and thanks for this data release,” Delores Knipp, Editor in Chief of Space Weather, wrote in a blog post accompanying the feature article. “This cache of data will likely drive fundamental new developments in geospace research. The data release should be emulated by other nations as they invest in space-based global and regional navigation satellite systems.”

The Los Alamos-GPS sensor data is hosted by the National Oceanic and Atmospheric Administration (NOAA) at: https://www.ngdc.noaa.gov/stp/space-weather/satellite-data/satellite-systems/, or by searching for “GPS Energetic Particles” at https://data.gov. The sensors are supported by the Department of Energy’s National Nuclear Security Administration.