An EU-funded project is developing two new deep-water gliders that would expand the ability of scientists and industry to measure the environmental impact of commercial activities such as drilling for oil and gas at sea. The autonomous gliders, sort of deep-sea drones, would also be able to extract better and more meaningful data from greater depths. The insights gained from improved ocean monitoring would contribute to the management of maritime resources.

Autonomous underwater gliders use internal buoyancy controls to travel to depth and back up again over long periods of time, while carrying sensors to continuously measure properties such as water temperature, salinity and pollution. Marine scientists use them as a cost-effective means of monitoring and understanding the ocean environment.

BRIDGES aims to expand their range and usefulness to both researchers and industry. The project is developing and testing two prototype gliders. One will be able to dive to 2 400 metres, the other to 5 000 metres. The gliders’ design will be based on the experience gained from Europe’s only deep-water glider, the SeaExplorer, which was developed by one of the project’s partners and can reach a depth of 1 000 metres. 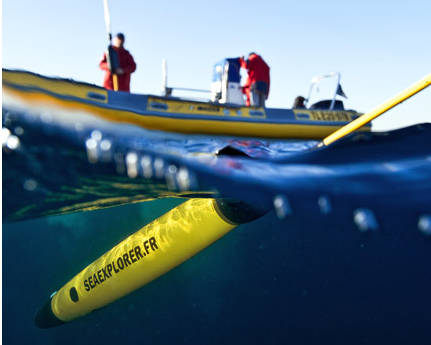 The two gliders will be able to carry a wider range of more sophisticated sensors, some of which are being developed by the project. Sensors designed for use by oil and gas companies and by deep-sea mining companies would be able to measure the environmental impact of their operations. Others could be used to discover new sources of petroleum or minerals.

For example, the project is developing a sensor to sample water for the presence of hydrocarbons or methane. Another will be able to measure nitrate, phosphate, ammonia and silicate levels. An acoustic system on the glider would be able to gather information on the characteristics of the seabed. An automatic water sampler will allow scientists to take direct measurements on 100 ml samples taken at specific depths.

The project envisages the provision of an oil and gas monitoring service through a package of sensors attached to a glider. For example, an underwater glider could be used as an early warning system for detecting deep-sea oil spills and seepages. Another package of sensors would allow scientists to measure biodiversity, eutrophication, and the extent of food networks in a particular area of an ocean or sea.

The project is designing both gliders in a modular format so different packages of sensors and batteries can easily switched between missions, which can last for up to two months. The gliders will also be outfitted with both a buoyancy system and a propeller engine, providing them with a wider range of control and movement at depth

Contacts and sources:
EC Research and Innovation
on January 31, 2017