The First Glimpse of a Single Protein

Proteins are the tools of life. In future, scientists may be able to examine single molecules with an especially gentle method to determine how they are constructed, how they perform their functions in cells, and how they interact with potential drugs. This is possible thanks to holograms of proteins that, for the first time, have produced using very slow electrons by scientists at the University of Zurich and the Max Planck Institute for So lid State Research in Stuttgart.

A holographic image of a single protein: The image of the protein albumin (centre) is calculated from the hologram (left). In principle, it is as if one traced the waves generated by a stone thrown into water in order to reconstruct the shape of the stone. As a comparison with a simulation of electron density shows, the holographic representation reproduces the global structure of the protein very accurately.

Knowing the structure of proteins is of interest not only to biologists who want to understand how an organism works but also to doctors and pharmacologists who need to know how proteins are constructed, how they interact with other proteins and smaller molecules, and how those binding sites change as the protein performs its functions. With this knowledge, researchers can develop medical drugs that interact with the protein machinery when it breaks down and we fall ill.

The ability to image single proteins could be extremely useful: common methods such as X-ray structure analysis and cryo-electron microscopy require crystals of the biomolecules or a large amount of a protein. A shortfall of these methods is that crystals of many proteins are impossible to grow. Moreover, due to the averaging, the techniques often fail to detect differences between various conformations, i.e. structural variants, of the biomolecule. Yet it is precisely these variations that are important in the search for new drugs, as proteins assume various conformations when they perform their functions.

The original idea of holography is now reality

“We have now imaged single proteins for the first time,” says Hans-Werner Fink, professor at the University of Zurich and head of the experiment. “This was achieved by combining two methods that are unique in the scientific world: electron holography and electrospray ion beam deposition, which allows samples to be prepared very gently.” Using this combination, the researchers have generated holograms of cytochrome C, albumin and haemoglobin. As the structures of these proteins are already known, the researchers were able to use them to confirm the accuracy and usefulness of the holograms.

Diagram showing the electron holography of single proteins: A metal tip whose end tapers to just a few atoms emits a beam of relatively slow, i.e., low-energy electrons. Part of the beam is scattered by the protein on a graphene carrier. The scattered part of the beam then generates an interference pattern with the non-scattered part − the hologram – which is recorded. 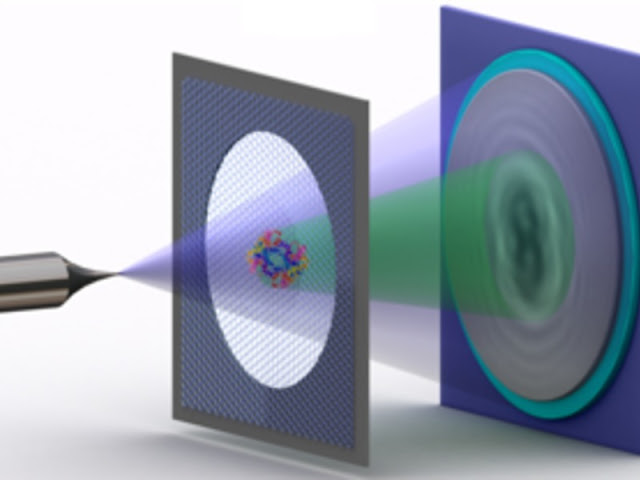 For electron holography, the researchers in Hans-Werner Fink’s Zurich-based group have developed an innovative microscope that exploits the wave properties of electrons. The microscope radiates low-energy electrons through a protein and superimposes the scattered electrons with the part of the electron beam that has not interacted with the protein. The resulting interference pattern, which can be recorded by the microscope, forms a hologram similar to those obtained by optical holography. “Because the electrons have very little energy, there is very little radiation damage, even if we image a protein for hours, unlike with other structural analysis methods,” explains Hans-Werner Fink.

With the electron holography microscope, the physicist has realized Dennis Gábor’s original idea. When the Hungarian-British engineer invented holography in 1947, he actually had an improved electron microscope in mind. However, at the time there were no suitable electron sources, so that, following the invention of the laser, this new principle of optical imaging could only be put into practice with light. Dennis Gábor received the Nobel Prize for Physics in 1971. “After the invention of an ultra-sharp electron point source, which emits electrons with similar properties as a laser light, we finally realized Dennis Gábor’s brilliant idea with electron waves,” says Hans-Werner Fink.

The gaseous protein is gently placed on graphene

However, to image single proteins with electron holography, the Swiss researchers still needed a carrier material for the proteins that is transparent to electron waves as well as a method to place biomolecules on it without causing damage. Graphene proved to be the most suitable material for the carrier.

Researchers at the Max Planck Institute for Solid State Research found the best solution for depositing proteins on the sheets made up of carbon layers: electrospray ion beam deposition, which was developed by a team headed by Stephan Rauschenbach in Klaus Kern’s department. The researchers expose the protein solution to a high electrical voltage so that the liquid is highly charged. Electrical repulsion then causes the liquid to atomize into a fine mist. When the mist droplets are exposed to a vacuum, the liquid evaporates and the dissolved constituents, i.e. proteins and impurities, remain behind as gases. A mass spectrometer then sorts the proteins according to their mass-to-charge ratios and also separates out impurities.

“Our method makes it possible to transfer single biological molecules into the vacuum and deposit them on a surface so gently that their fragile three-dimensional folded protein structure is preserved,” says Stephan Rauschenbach. “Thanks to preparative mass spectrometry, we also prevent contamination of the graphene samples with other molecules, which is crucial for the quality of the holographic image.” Mass spectrometry also makes it possible to separate protein mixtures or pure proteins from complexes with binding partners.

Information on the assembly of subunits

Once Stephan Rauschenbach and his colleagues have deposited the proteins on the graphene substrates in Stuttgart, the samples have to be transported to Zurich, where the electron holographic microscope is located. The samples must arrive in an uncontaminated state, meaning that no other molecules can be allowed to settle on the graphene. To transport the samples to Switzerland, the researchers have developed a case in which an ultra-high vacuum prevails, as in the apparatus itself.

Thanks not least to the meticulous care and cleanliness observed during the preparation and transport of the samples, electron holograms already achieve a resolution of less than one nanometre. “This allows us to investigate how the individual subunits of large protein complexes are assembled,” Stephan Rauschenbach says. The first holograms of single proteins also provide information about their three-dimensional structure.

“However, to accurately image protein structures at the atomic level, we still have to improve the resolution somewhat,” explains Klaus Kern. “, there are no physical obstacles preventing this.” The Zurich- and Stuttgart-based scientists now plan to construct a microscope in which the vibrations of proteins are suppressed by cooling the samples to around minus 200 degrees Celsius.

In addition, a unique precision laboratory has recently been constructed at the Max Planck Institute in Stuttgart, which offers perfect conditions for highly sensitive measurements such as holography. This laboratory was built on the initiative of Klaus Kern and is currently the gold standard for a low-vibration measuring environment. As soon as the electron holography microscope has been optimized, biomedical scientists can use this new instrument to study the intricacies of how the tools of life function.