Sunken Logs Serve as Habitats and Food in the Deep Sea

The deep sea is a vast and seemingly uninhabitable place, except for some small oases of life. Sunken wood logs, so-called wood falls, can form such oases and provide for rich life for limited periods. A new study by researchers from the Max Planck Institute for Marine Microbiology in Bremen takes a close look at the deep sea organisms inhabiting wood falls and how they affect their surroundings. They show that sunken logs are highly dynamic ecosystems and play an important role for the diversity and distribution of bacteria and animals alike.

Freshly deployed log in the Norwegian Sea. For each experiment, one large log as well as several smaller ones were deposited on the sea floor with the help of an remotely operated vehicle. 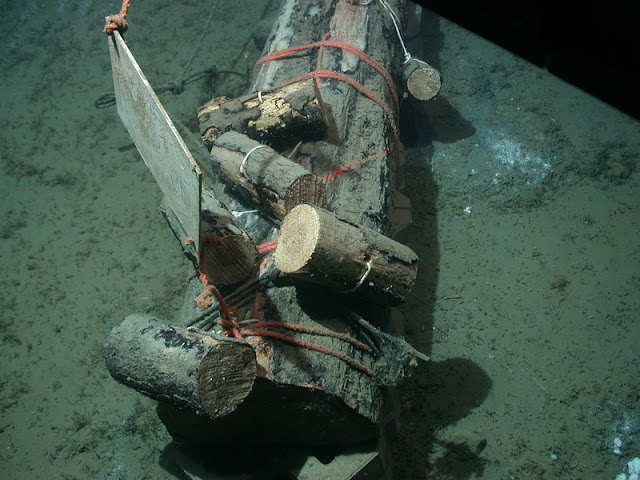 
Food is scarce in the deep sea. Thus, morsels of organic matter sinking to the sea floor can form an important food source for many organisms and lead to the establishment of locally highly productive and diverse communities. Such large food falls can be kelp, wood or whale carcasses, for example. While they might only affect small areas of the sea floor, they occur quite frequently and supply large amounts of carbon at a particular time and place.

As large organic food falls occur sporadically and locally, they are hard to study. Thus, a team of scientists from the Max Planck Institute for Marine Microbiology and the Alfred Wegener Institute, Helmholtz Centre for Polar and Marine Research in Bremerhaven sank self-made food falls into the deep sea to enable them to study the organisms attracted by those morsels in great detail. “We prepared a number of wood logs, standardised in size and age, took them to the sea and deployed them at cold seep sites in the Eastern Mediterranean and in the Norwegian Sea”, explains Petra Pop Ristova, first author of the study. Over a period of three years the logs were repeatedly sampled for their bacterial and larger faunal inhabitants. Subsequently they were retrieved from the sea floor for more detailed analyses.
Constant change

“We found that sunken logs are highly dynamic ecosystems”, Pop Ristova says. They are quickly colonised by a diverse community of organisms, starting with wood boring bivalves, which are essential for chewing the wood to small pieces. The wood community is not static but changes continuously. “For example, in the Eastern Mediterranean, different species of wood-boring bivalves succeeded each other, while the number of sipunculids, the so-called peanut worms, continuously increased.” At the same time, the bacterial community changed, with sulphate-reducers and sulphide-oxidisers increasing in proportion. 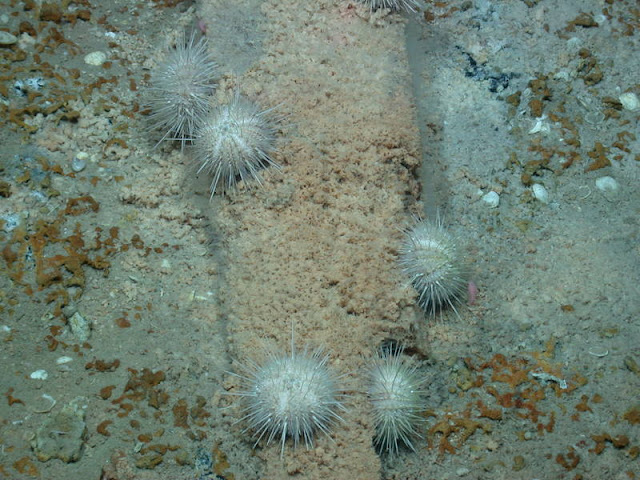 
Moreover, the scientists found that organisms nibbling at logs are not the same all over the ocean. “No other study has yet analysed standardised samples from different ocean regions to compare the succession of deep sea life”, says Pop Ristova. “Logs harboured different inhabitants depending on whether we deployed them in the cold Norwegian Sea or in the warm Mediterranean. Whether that is mainly due to the geographic setting or differing temperature, we can not yet resolve.”
Chips off the old log

The influence of wood falls is not restricted to the logs itself but expands to the surrounding sea floor. For example, sulphide production in the vicinity of the fall increases, accompanied by growing numbers of sulphate-reducers, the scientists report. However, this influence is restricted to a rather small area, extending only a few meters from the log. “This is clearly different from other large organic food falls such as whale carcasses”, says Antje Boetius, senior author of the study and group leader of the HGF-MPG Research Group for Deep Sea Ecology and Technology. “The impact of whale falls was shown to extend far beyond the carcass and last for several decades. Wood cellulose is much harder to degrade than lipids and proteins from a carcass and is carried out only by a few specialised organisms. Also, large mobile predators such as sharks and hagfish are not into wood – and even the wood boring bivalves totally depend on bacteria helping them to use wood as energy source.”

Nevertheless, the log falls do have a far-reaching impact: they serve as stepping stones for seep biota. Seeps and vents on the deep sea floor can lie hundreds of kilometres apart – a long way for bacteria and larvae of seep inhabitants to travel. “On wood falls, conditions favourable for these organisms develop at a certain stage. Thus, they can serve as a stop-over during dispersal”, says Pop Ristova.

Hubs of productivity and biodiversity

When large amounts of food become temporarily available in an otherwise food-deprived surrounding, prolific ecosystems develop that attract a highly adapted and opportunistic fauna. They promote the development of an ecosystem with one the highest species richness known from deep-sea habitats. While log falls might be harder to chew than large carcasses, they nevertheless play an important role for the surrounding ecosystem as hubs of biodiversity and as stepping stones for seep biota.