Imagine you’re sitting on an airplane. Cruising through the stratosphere at 36,000 feet, you’re well above the clouds and birds, and indeed, much of the atmosphere. But, despite its looks, this region is far from empty.

Just above you, high-energy particles, called cosmic rays, are zooming in from outer space. These speedy particles crash wildly into molecules in the atmosphere, causing a chain reaction of particle decays. While we are largely protected from this radiation on the ground, up in the thin atmosphere of the stratosphere, these particles can affect humans and electronics alike.

Launched in September 2015 near Fort Sumner, New Mexico, NASA’s Radiation Dosimetry Experiment, or RaD-X, used a giant helium-filled balloon to send instruments into the stratosphere to measure cosmic radiation coming from the sun and interstellar space. The results, presented in a special issue of the Space Weather Journal, showcase some of the first measurements of their kind at altitudes from 26,000 to over 120,000 feet above Earth.

“The measurements, for the first time, were taken at seven different altitudes, where the physics of dosimetry is very different,” said Chris Mertens, principal investigator of the RaD-X mission at NASA’s Langley Research Center in Hampton, Virginia. “By having the measurements at these seven altitudes we’re really able to test how well our models capture the physics of cosmic radiation.”

Cosmic radiation is caused by high-energy particles that continually shower down from space. Most of these energetic particles come from outside the solar system, though the sun is an important source during solar storms.

Earth’s magnetosphere, which acts as a giant magnetic shield, blocks most of the radiation from ever reaching the planet. Particles with sufficient energy, however, can penetrate both Earth’s magnetosphere and atmosphere, where they collide with molecules of nitrogen and oxygen. These collisions cause the high-energy particles to decay into different particles through processes known as nucleonic and electromagnetic cascades.

A severe solar storm in 2003 caused a temporary spike in radiation levels near the poles, where protection by Earth's magnetic field is decreased. 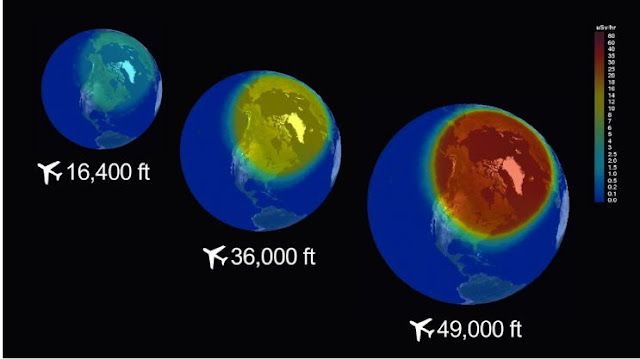 If you could see the particles from the airplane window, you would notice them clustering in a region above the plane. The density of the atmosphere causes the decay to happen predominantly at a height of 60,000 feet, which creates a concentrated layer of radiation particles known as the Pfotzer maximum.

Radiation in the atmosphere can be measured in two ways – by how much is present or by how much it can harm biological tissue. The latter is known as the dose equivalent and is the standard for quantifying health risks. This quantity is notoriously hard to measure, as it requires knowing the both the type and energy of the particle that deposited the radiation, not simply how many particles there are.

These particles, both the primary high-energy particles and the secondary decay particles, can have adverse health effects on humans. Cosmic radiation breaks down DNA and produces free radicals, which can alter cell functions.

The RaD-X mission took high-altitude measurements, few of which previously existed, to better understand how cosmic radiation moves through Earth’s atmosphere. Measuring dose equivalent rate over a range of altitudes, they found a steady increase in the rate higher in the atmosphere, a finding seemingly contrary to the concentration of particles at the Pfotzer maximum. This can be explained by the complex interplay of primary and secondary particles at these altitudes, as the primary particles found higher up have a much more damaging effect on tissue than the secondary particles.

Travelers flying polar routes to Asia or Europe can receive radiation doses that are up to three-times higher than near the equator. 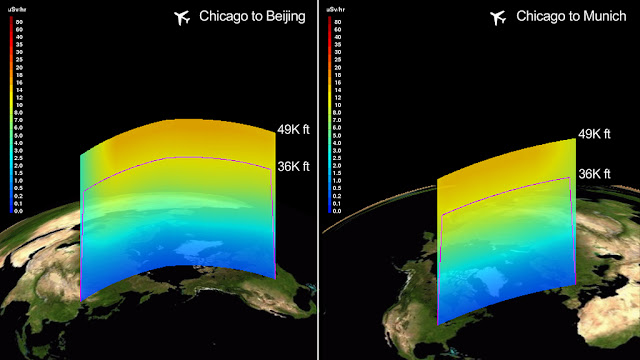 Because of their time spent in Earth’s upper atmosphere, aircrew in the aviation industry are exposed to nearly double the radiation levels of ground-based individuals. Exposure to cosmic radiation is also a concern for crew aboard the International Space Station and future astronauts journeying to Mars, which has a radiation environment similar to Earth’s upper atmosphere. Learning how to protect humans from radiation exposure is a key step in future space exploration.

The results from RaD-X will be used to improve space weather models, like the Nowcast of Atmospheric Ionizing Radiation for Aviation Safety, or NAIRAS, model, which predicts radiation events. These predictions are used by commercial pilots to know when and where radiation levels are unsafe, allowing rerouting of aircraft in the affected region when necessary.

While balloon flights like RaD-X are essential for modelling the radiation environment, they cannot provide real-time radiation monitoring, which NAIRAS requires for forecasting. NASA’s Automated Radiation Measurements for Aerospace Safety program works in conjunction with RaD-X to develop and test instruments that can be flown aboard commercial aircraft for real-time monitoring at high altitudes. 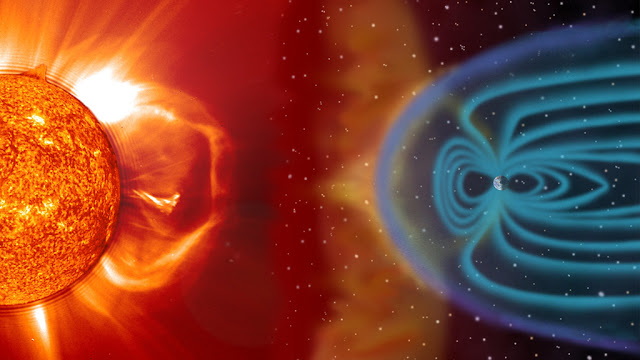 Currently, an instrument called a TEPC – short for tissue equivalent proportional counter – is the standard instrument for measuring cosmic radiation. This instrument is large, expensive and cannot be commercial built – making it less than ideal for wide-scale distribution.

“We need small, compact, solid-state based instruments calibrated against the TEPC that can reliably measure the dose equivalents and can be integrated into aircraft cheaply and compactly,” Mertens said.

The flight mission tested two new instruments – the RaySure detector and the Teledyne TID detector – in hope that they can be installed on commercial aircraft in the future. These new instruments offer the advantage of being compact and easily produced. During RaD-X mission testing, both instruments were found to be promising candidates for future real-time, in situ monitoring.