A team of Andalusian scientists, led by the University of Granada (UGR), has been able to reconstruct for the first time what the Gibraltar Arc was like 9 million years ago. It's one of the most narrowest landforms on Earth.

Said movements have completely reshaped the Gibraltar Arc, since they have been carried out at a very high speed: 6 degrees per million years (in total, 53 degrees for the block of the Western Baetic System), and are compatible with both the opening of the Strait of Gibraltar about 5 million years ago as with the current movements measured with GPS.

This is a satellite image of the Gibraltar Arc 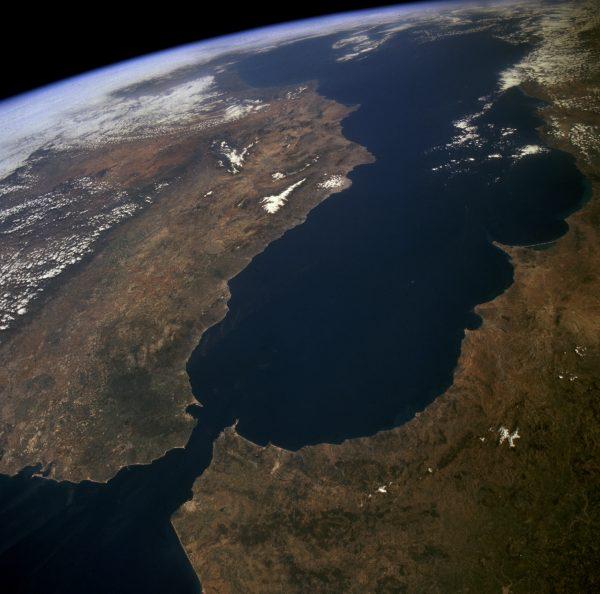 
As Ana Crespo-Blanc, professor from the Department of Geodynamics at the UGR and lead researcher of the project, explains, the Gibraltar Arc is a geological region corresponding to the arched mountain range that surrounds the sea of Alborán (located between the Iberian peninsula and Africa), and it is formed by the Baetic System (south of Spain), the Strait of Gibraltar and the Rif (north of Morocco).

The team of geologists, belonging to the universities of Granada, Pablo de Olavide (Seville) and the Andalusian Earth Sciences Institute (IACT from its abbreviation in Spanish), has analyzed the existing connection between the different episodes of deformation that the Baetic and Rif mountain ranges have suffered (which include folds and ridges), as well as the paleomagnetism data of previous publications.

"This work, published in the journal Tectonophysics, is the first in the world that shows both the homogeneity of block rotations and the speed of said rotations for the Gibraltar Arc. It allows to reconcile many apparently contradictory data, particularly in relation to the kinematic markers of the movements associated with large geological structures such as faults systems 9 million years ago", professor Crespo-Blanc explains.

Their research culminates with a reconstruction of the Gibraltar Arc 9 million years ago, at a key moment in the tectonic history of the collision between Africa and Iberia, shortly before the closure of the connection between the Atlantic and the Mediterranean and when the Gibraltar Arc was situated more to the East than at present.

Citation: Clues for a Tortonian reconstruction of the Gibraltar Arc: Structural pattern, deformation diachronism and block rotations http://dx.doi.org/10.1016/j.tecto.2016.05.045
on January 28, 2017