Incredibly rapid gas flares from a white dwarf binary star system have been detected for the first time by Oxford University scientists. The first sighting of such activity, it suggests that our current understanding of star habits and their capabilities is incomplete.

The rapid flares, which are extremely powerful, fast variations in brightness, occur when a star releases an enormous amount of energy, suddenly. Similar, but less energetic activity is seen in our Sun, where magnetic energy is released over a short time-span in solar flares. The unusual activity was observed at radio wavelengths in SS Cyg -- one of the brightest variable stars in the constellation of Cygnus, defying current understanding of gas accretion and the production of flares in these stars.

Dwarf novae (SS Cyg-like objects, which contain a Sun-like star orbiting a white dwarf star) are well known for their repeated, low-level, bursting behaviour (called "outbursts") but they have never been observed exhibiting behaviour on anything like the scale of rapid flares before.

In February 2016 the dwarf nova SS Cyg anomalous outburst lasted for more than 3 weeks. Rapid radio flaring was seen throughout the outburst and the most intriguing behavior was towards the end of the outburst, where a fast, luminous, giant flare, peaking at ~20 mJy and lasting for 15 minutes was observed. This is the first time that such a flare has been observed in SS Cyg. Rapid flares are defined as a sudden,rapid, and intense variation in brightness. 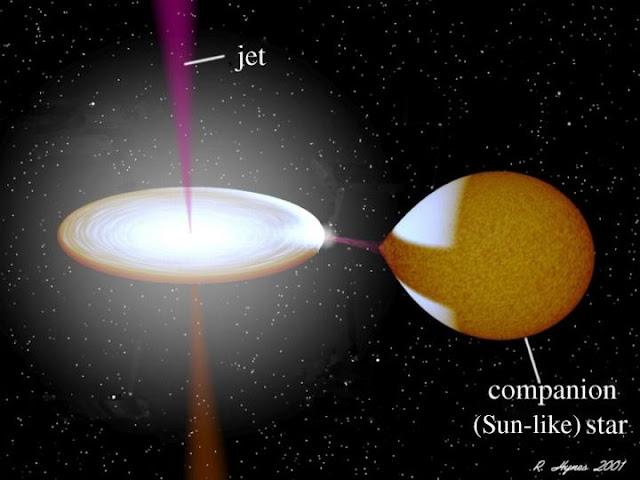 Outbursts have previously been seen in white dwarfs, neutron stars and even enormous black holes residing in different galaxies. Such stars mainly feed on gas from their companion stars via accretion (where a large amount of gas is accumulated and builds up through gravitational force). Occasionally, these stars "throw up" some of the gas in the form of jets, which are powerful overflows of gas restricted to a single, narrow, cone-like flow.

Initial observations of the SS Cyg activity in February 2016 were considered an atypical outburst, but later telescopic analysis uncovered the intriguing revelation of rapid flares. The most fascinating and unexpected behaviour was observed at radio wavelengths towards the end of the outburst, when a "giant" flare was observed. Lasting for less than 15 minutes, it had the energy of more than a million times the strongest solar flares. The level of radio data recorded from the flare is unprecedented in dwarf nova systems and consistent with that expected from a jet.

Dr. Kunal Mooley, Astrophysics research fellow at Oxford University, who led the research, said: "Many of astrophysics' most compelling studies have been based on studying SS Cyg. The latest, a detection of a rapid, radio flare -- especially a fast, bright flare towards the end of the outburst, is highly unusual and demonstrates that there may even be some new physics at play. We expected to see slow variation flares, but found fast, rapid, cone-like spikes of activity and observed an enormous amount of energy being released in a time-span as short as ten minutes. Nothing like this has ever been seen before in a dwarf nova system.

Radio wavelengths provide key insights into the mechanisms responsible for accelerating electrons, including jets and outflows. The image shows densely-sampled radio coverage, (obtained with the Arcminute MicroKelvin Imager Large Array), of the dwarf nova SS Cyg during its February 2016 anomalous outburst. The outburst displayed a slower rise (3 days per mag) in the optical than typical ones, and lasted for more than 3 weeks. Rapid radio flaring on timescales <1 br="" hour="" nbsp="" outburst.="" seen="" the="" throughout="" was=""> 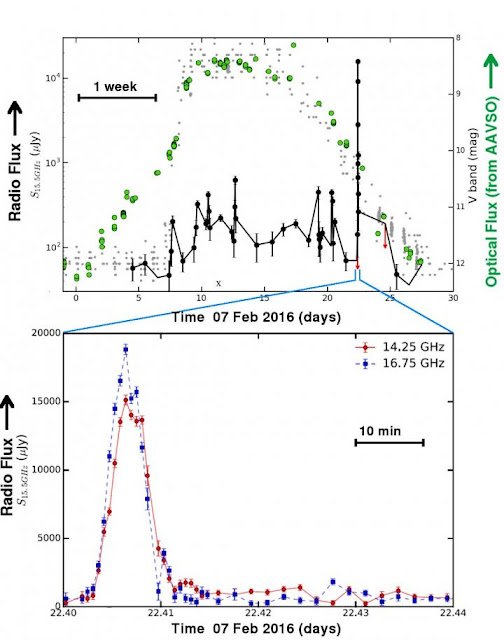 The most intriguing behavior was towards the end of the outburst where a fast, luminous ('giant'), flare peaking at ~20 mJy and lasting for 15 minutes was observed. This is the first time that such a flare has been observed in SS Cyg, and insufficient coverage could explain its non-detection in previous outbursts. These data, together with past radio observations, are consistent with synchrotron emission from plasma ejection events as being the origin of the radio flares. However, the production of the giant flare during the declining accretion rate phase remains unexplained within the standard accretion-jet framework and appears to be markedly different to similar patterns of behavior in X-ray binaries.

"Moving forward, theorists should work with observers to find the answer to why these rapid flares occurred in SS Cyg. To really understand the process of gas accretion and gas expulsion in white dwarf systems - especially dwarf novae, similar studies should be carried out on other astrophysical systems."

First discovered over one hundred years ago, SS Cyg has been studied extensively by astronomers. The star continues to provide new insights into the physical processes associated with white dwarf binary systems, such as those found by Dr Mooley's team.

Dr Mooley and his team at Oxford are now conducting further analyses, and working to build a body of conclusive events about dwarf nova behaviours and establish if they are in fact capable of launching powerful jets.

Full findings were published in Monthly Notices of the Royal Astronomical Society http://bit.ly/2jtnUFa