Oldest, Most Complete Iguanian Fossil In the Americas Illuminates the Lives of Lizards in the Age of Dinosaurs

Paleontologists picking through a bounty of fossils from Montana have discovered something unexpected — a new species of lizard from the late dinosaur era, whose closest relatives roamed in faraway Asia.

This ancient lizard, which lived 75 million years ago in a dinosaur nesting site, is described from stem to stern in a paper published Jan. 25 in the Proceedings of the Royal Society B.

An illustrated life reconstruction of Magnuviator ovimonsensis at the Egg Mountain site as it may have appeared in the Cretaceous Period 75 million years ago. One Magnuviator eats a wasp, and on the ground is a tooth from the bird-like dinosaur Troodon. The arid-adapted plant is based on fossil pollen found near Egg Mountain.Misaki Ouchida 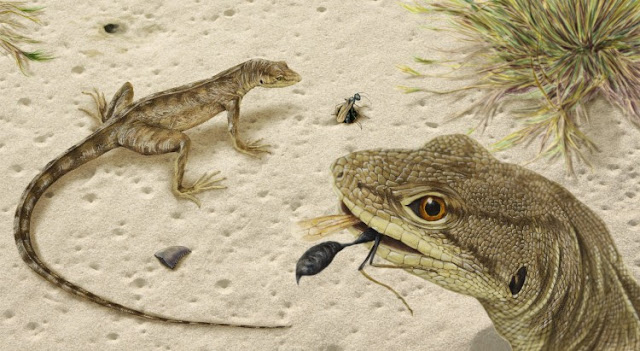 Christened Magnuviator ovimonsensis, the new species fills in significant gaps in our understanding of how lizards evolved and spread during the dinosaur era, according to paleontologists at the University of Washington and the Burke Museum of Natural History & Culture who led the study.

A close-up view of the holotype specimen of Magnuviator ovimonsensis (left) and a sketch (right) with key bones labeled. 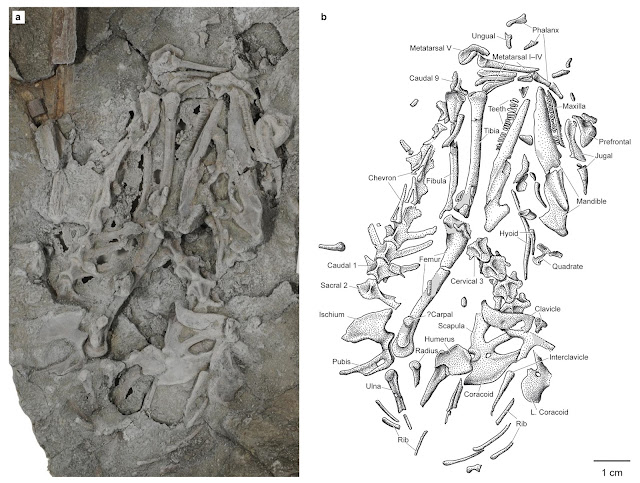 “It is incredibly rare to find one complete fossil skeleton from a relatively small creature like this lizard,” said David DeMar, lead author and postdoctoral research associate in the UW biology department and the Burke Museum. “But, in fact, we had two specimens, both from the same site at Egg Mountain in Montana.”

Right out of the gate, Magnuviator is reshaping how scientists view lizards, their biodiversity and their role in complex ecosystems during this reptile’s carefree days in the Cretaceous Period 75 million years ago.

Based on analyses of the nearly complete fossil skeletons, Magnuviator was an ancient offshoot of iguanian lizards — and they’re actually the oldest, most complete iguanian fossils from the Americas. Today, iguanians include chameleons of the Old World, iguanas and anoles in the American tropics and even the infamous water-walking basilisk — or “Jesus Christ” — lizards. But based on its anatomy, Magnuviator was at best a distant relative of these modern lizard families, most of which did not arise until after the non-avian dinosaurs — and quite a few lizards and other creatures — went extinct 66 million years ago. 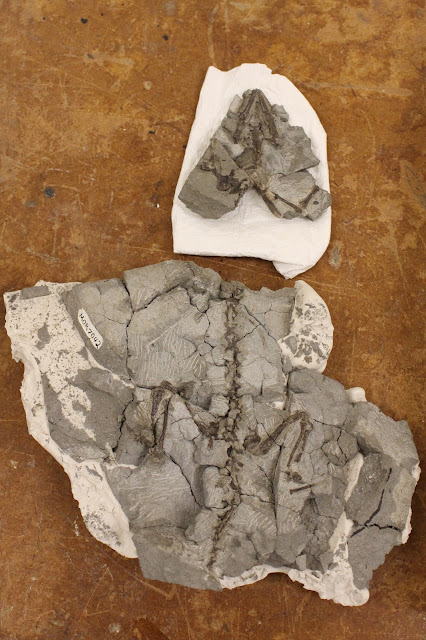 The team came to these conclusions after meticulous study of both Egg Mountain specimens over four years. This included a round of CT scans at Seattle Children’s Hospital to narrow down the fossil’s location within a larger section of rock and a second round at the American Museum of Natural History to digitally reconstruct the skull anatomy. The fact that both skeletons were nearly complete allowed them to determine not only that Magnuviator represented an entirely new species, but also that its closest kin weren’t other fossil lizards from the Americas. Instead, it showed striking similarities to other Cretaceous Period iguanians from Mongolia.

“These ancient lineages are not the iguanian lizards which dominate parts of the Americas today, such as anoles and horned lizards,” said DeMar. “So discoveries like Magnuviatorgive us a rare glimpse into the types of ‘stem’ lizards that were present before the extinction of the dinosaurs.”

But Magnuviator‘s surprises don’t end with the Mongolian connection. The site of its discovery is also eye-popping.

A distant view of Egg Mountain and the basin in which it lies. Egg Mountain is in the center-left of this image, within the basin. Clearly visible at its top are black rectangular shapes, which are tarps erected near the excavation site.

Egg Mountain is already famous among fossil hunters. Over 30 years ago, paleontologists discovered the first fossil remains of dinosaur babies there, and it is also one of the first sites in North America where dinosaur eggs were discovered. 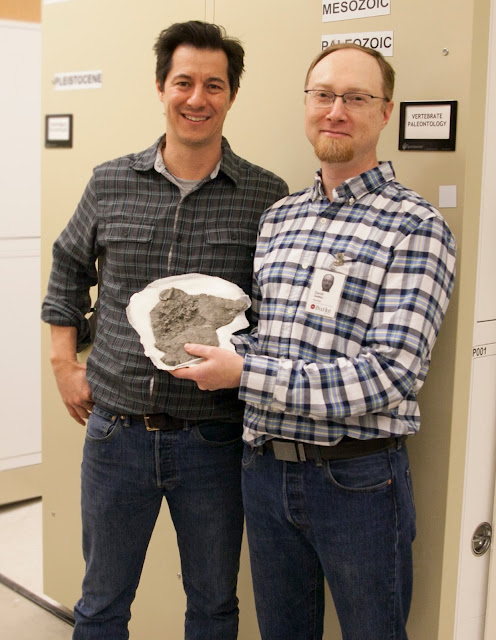 “We now recognize Egg Mountain as a unique site for understanding Cretaceous Period ecosystems in North America,” said senior author Greg Wilson, UW associate professor of biology and curator of paleontology at the Burke Museum. “We believe both carnivorous and herbivorous dinosaurs came to this site repeatedly to nest, and in the process of excavating this site we are learning more and more about other creatures who lived and died there.”

The team even named their new find as homage to its famous home and its close lizard relatives in Asia. Magnuviator ovimonsensis means “mighty traveler from Egg Mountain.”

Through excavations at Egg Mountain led by co-author David Varricchio at Montana State University and meticulous analysis of fossils at partner institutions like the UW and the Burke Museum, scientists are piecing together the Egg Mountain ecosystem of 75 million years ago. In those days, Egg Mountain was a semi-arid environment, with little or no water at the surface. Dinosaurs like the duck-billed hadrosaurs and the birdlike, carnivorous Troodon nested there.

Researchers at work on the Egg Mountain site. 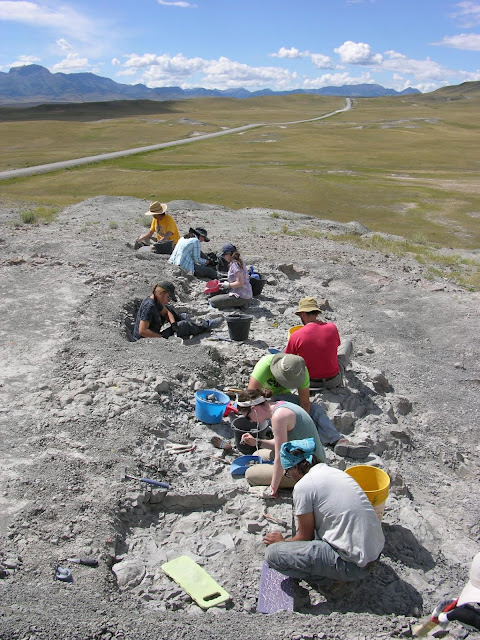 Researchers have also unearthed fossilized mammals at Egg Mountain, which are being studied by Wilson’s group, as well as wasp pupae cases and pollen grains from plants adapted for dry environments. Based on the structure of Magnuviator‘s teeth, as well as the eating habits of some lizards today, the researchers believe that it could have feasted on wasps at the Egg Mountain site. Though based on its relatively large size for a lizard — about 14 inches in length — Magnuviator could have also eaten something entirely different.

“Due to the significant metabolic requirements to digest plant material, only lizards above a certain body size can eat plants, and Magnuviator definitely falls within that size range,” said DeMar.

Whatever its diet, Magnuviator and its relatives in Mongolia did not make it into the modern era. DeMar and co-authors hypothesize that these stem lineages of lizards may have gone extinct along with the non-avian dinosaurs. But given the spotty record for lizards in the fossil record, it will take more Magnuviator-level discoveries to resolve this debate. And, unfortunately, part of the excitement surrounding Magnuviator is that it is a rare find.

Contacts and sources:
James Urton
University of Washington
on January 25, 2017