Rift Valley fever is an emerging viral disease that is threatening public health and has already had a substantial economic impact.


Two publications in PNAS and Scientific Reports have revealed that in Madagascar, cattle trading is the main trigger factor for epidemics, and that between two outbreaks, the virus persists in some parts of the island.

This work, by researchers from CIRAD, the Institut Pasteur in Madagascar and the University of Oxford, with their partners from the veterinary and public health services in Madagascar, the OIE, the FAO and the WHO, should serve to pinpoint the most vulnerable populations and improve human and animal surveillance networks.

Cattle trading plays a central role in the Madagascan economy 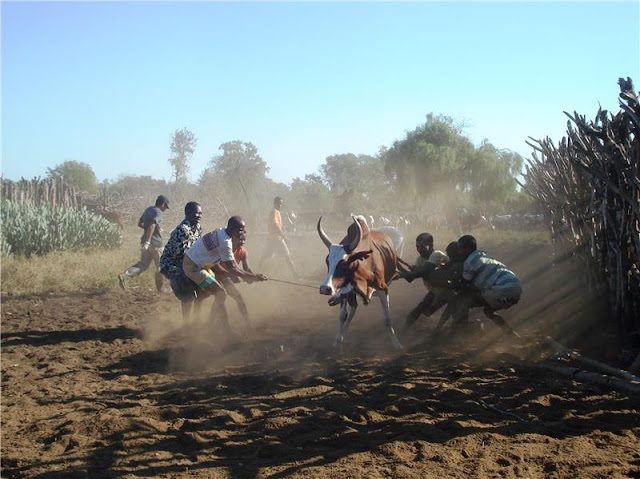 The past 25 years have been marked by a resurgence in Rift Valley fever and by its geographic spread. After eastern and southern Africa, Madagascar saw two major epidemics in 1990-91 and 2008-09, which caused the loss of many cattle and - in the case of the second outbreak - some 10 000 cases in humans, of which 26 proved fatal.

To explain these epidemics, researchers looked into the origins of the emergence of the Rift Valley fever virus (RVFV), and traced the history of its circulation. This work was vital, since as Renaud Lancelot, an epidemiologists with CIRAD's ASTRE research unit, points out: "Diseases spread by vector insects are really dangerous and very difficult to contain. We had a glimpse of this in Europe, with bluetongue, which originated in Africa".

What is specific about Madagascar

"In order to explain these epidemic outbreaks, it was important to take an original, One Health-type approach, looking at environmental data, the results of serological surveys in humans and animals, and trade data", says Jean-Michel Héraud, Head of the Virology Unit at the Institut Pasteur in Madagascar. The results obtained showed that in Madagascar, epidemics are linked to human activity in the form of cattle trading: sick animals, transported over long distances, can trigger epidemics a long way from their initial point of infection (1). "The virus seems to lose its pathogenicity between two epidemics", Renaud Lancelot explains. "New epidemics only occur if a new virus is reintroduced, particularly through trading". The case of Grande Île is different from that of east Africa, where epidemics are triggered by heavy rains resulting from El Niño episodes.

Alongside this work, the researchers studied the dynamics of virus transmission over some 20 years. They analysed blood samples from almost 3000 zebus to look for traces of old infections and map virus circulation over the past two decades. The results showed that in the hot, humid regions of northwestern Madagascar, RVFV may not disappear between two epidemics, but rather may persist at low levels (2). "Zebu trading strongly connects these regions with the highlands in the centre of the country, where there are many abattoirs and markets", Marie-Marie Olive, who conducted this work as part of her PhD studies. "The Northwest could therefore be the source of new epidemics, since animals from the highlands, where the degree of herd immunity is lower, could be contaminated by infected animals transported from those humid regions."

This work to elucidate the mechanisms behind the circulation of insect-borne diseases is vitally important. The trade in live cattle, which is global, could foster their spread, at a time when climate change is already modifying global vector distribution, facilitating their establishment beyond the confines of their region of origin.

Rift Valley fever
This disease of wild and domestic ruminants, which is caused by a virus transmitted by mosquitoes, affects Africa, the Arabian Peninsula and certain Indian Ocean islands. It leads to substantial economic losses, since in addition to causing abortions and killing young cattle, sheep and goats, it results in bans on live animal trading, a vital source of income for livestock farmers and exporting countries. It is also a public health risk, as it can be transmitted to humans, primarily during the slaughter and butchery of contaminated animals. No cases of contamination between humans have yet been observed.