Efforts by Salk Institute researchers to grow the first embryos containing cells from humans and pigs proved more challenging than anticipated, they report January 26 in Cell. Human/animal chimeras can offer insights into early human development and disease onset and provide a realistic drug-testing platform. They may also someday provide a means of growing human cells, tissues, and organs for regenerative medicine. For now, however, they are helping scientists understand how human stem cells grow and specialize.

"The ultimate goal is to grow functional and transplantable tissue or organs, but we are far away from that," says lead investigator Juan Carlos Izpisua Belmonte, a professor in the Salk Institute of Biological Studies' Gene Expression Laboratory. "This is an important first step." 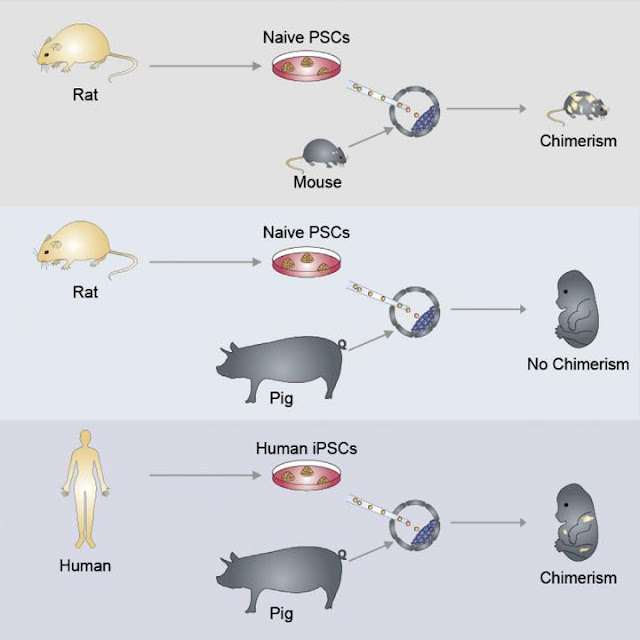 Despite decades of work, scientists are still struggling to coax stem cells growing in Petri dishes to become fully functional specialized adult cells, let alone three-dimensional tissues and organs. "It's like when you try to duplicate a key. The duplicate looks almost identical, but when you get home, it doesn't open the door. There is something we are not doing right," says Izpisua Belmonte. "We thought growing human cells in an animal would be much more fruitful. We still have many things to learn about the early development of cells."

Izpisua Belmonte and Wu built on that experiment by using genome editing to flexibly direct the rat cells to grow in specific developmental niches in the mouse. To accomplish this, they used CRISPR genome editing tools to delete critical genes in fertilized mouse egg cells. For instance, in a given cell, they would delete a single gene critical for the development of an organ, such as the heart, pancreas, or eye. Then, they introduced rat stem cells into the embryos to see if they would fill the open niche. "The rat cells have a functional copy of the missing mouse gene, so they can outcompete mouse cells in occupying the emptied developmental organ niches," says Wu. As the organism matured, the rat cells filled in where mouse cells could not, forming the functional tissues of the organism's heart, eye, or pancreas.

Rat cells also grew to form a gall bladder in the mouse, even though rats stopped developing this organ themselves over the 18 million years since rats and mice separated evolutionarily. "This suggests that the reason a rat does not generate a gall bladder is not because it cannot, but because the potential has been hidden by a rat-specific developmental program," says Wu. "The microenvironment has evolved through millions of years to choose a program that defines a rat." 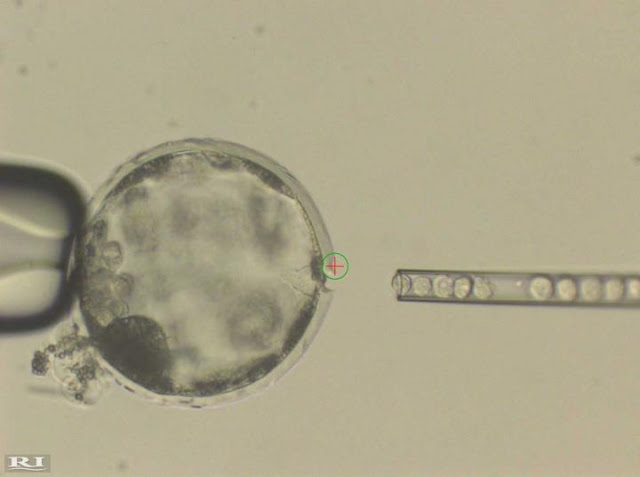 
The team's next step was to introduce humans' cells into an organism. They decided to use cow and pig embryos as hosts because the size of these animals' organs more closely resembles humans than mice. The team encountered many logistical challenges, but the scientific challenge was determining what kind of human stem cell could survive in a cow or pig embryo.

Experiments with cow embryos were more difficult and costly than pigs, so the team zoomed in on pigs. The effort required to complete studies of 1,500 pig embryos involved the contributions of over 40 people, including pig farmers, over a four-year period. "We underestimated the effort involved," says Izpisua Belmonte. "This required a tour de force."

Not only are pigs and humans about five times more distant evolutionarily than mice and rats, but pigs also have a gestation period that is about one-third as long as humans, so the researchers needed to introduce human cells with perfect timing to match the developmental stage of the pig. "It's as if the human cells were entering a freeway going faster than the normal freeway," says Izpisua Belmonte. "If you have different speeds, you will have accidents."

The researchers injected several different forms of human stem cells into pig embryos to see which would survive best. The cells that survived longest and showed the most potential to continue to develop were "intermediate" human pluripotent stem cells. So-called "naïve" cells resemble cells from an earlier developmental origin with unrestricted developmental potential; "primed" cells have developed further, but still remain pluripotent. "Intermediate cells are somewhere in between," says Wu. 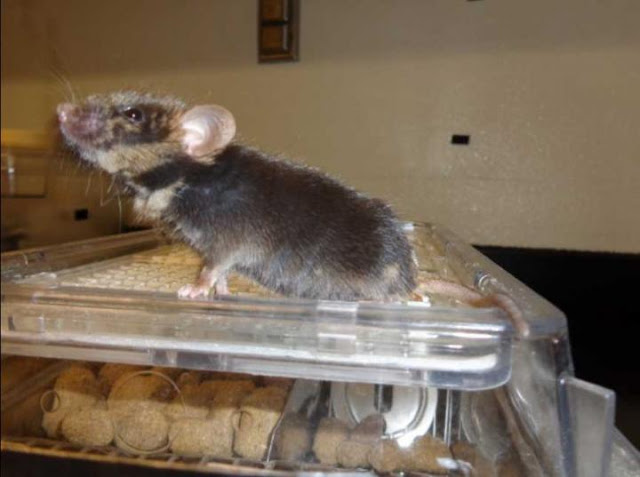 
The human cells survived and formed a human/pig chimera embryo. Embryos were implanted in sows and allowed to develop for between three and four weeks. "This is long enough for us to try to understand how the human and pig cells mix together early on without raising ethical concerns about mature chimeric animals," says Izpisua Belmonte.

Even using the most well-performing human stem cells, the level of contribution to the chimerized embryo was not high. "It's low," says Wu.

Izpisua Belmonte considers this good news. One concern with the creation of human/animal chimeras is that the chimera will be too human. For instance, researchers don't want human cells to contribute to the formation of the brain.

In this study, the human cells did not become precursors of brain cells that can grow into the central nervous system. Rather, they were developing into muscle cells and precursors of other organs. "At this point, we wanted to know whether human cells can contribute at all to address the 'yes or no' question," he says. "Now that we know the answer is yes, our next challenge is to improve efficiency and guide the human cells into forming a particular organ in pigs."

To do this, the researchers are using CRISPR to perform genome editing on the pig genome, as they did with mice, to open gaps that human cells can fill in. The work is in progress.