A new way of looking at how pollutants ride through the atmosphere has quadrupled the estimate of global lung cancer risk from a pollutant caused by combustion, to a level that is now double the allowable limit recommended by the World Health Organization.

The findings, published this week in the Proceedings of the National Academy of Sciences Early Edition online, showed that tiny floating particles can grow semi-solid around pollutants, allowing them to last longer and travel much farther than what previous global climate models predicted.

Scientists said the new estimates more closely match actual measurements of the pollutants from more than 300 urban and rural settings.


New research has revealed the ways that aerosol droplets can form to transport pollutants long distances, even across oceans. 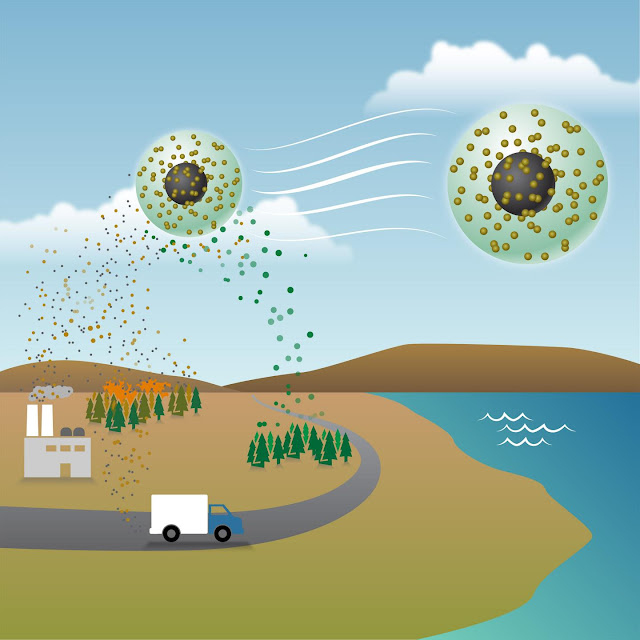 
The study was done by scientists at Oregon State University, the Department of Energy's Pacific Northwest National Laboratory, or PNNL, and Peking University. The research was primarily supported by PNNL.

"We developed and implemented new modeling approaches based on laboratory measurements to include shielding of toxics by organic aerosols, in a global climate model that resulted in large improvements of model predictions," said PNNL climate scientist and lead author Manish Shrivastava.

"This work brings together theory, lab experiments and field observations to show how viscous organic aerosols can largely elevate global human exposure to toxic particles, by shielding them from chemical degradation in the atmosphere."

But PAHs have been difficult to represent in past climate models. Simulations of their degradation process fail to match the amount of PAH that is actually measured in the environment.

To look more closely at how far PAHs can travel while riding shielded on a viscous aerosol, the researchers compared the new model's numbers to PAH concentrations actually measured by Oregon State University scientists at the top of Mount Bachelor in the central Oregon Cascade Range.

"Our team found that the predictions with the new shielded models of PAHs came in at concentrations similar to what we measured on the mountain," said Staci Simonich, a toxicologist and chemist in the College of Agricultural Sciences and College of Science at OSU, and international expert on the transport of PAHs.

"The level of PAHs we measured on Mount Bachelor was four times higher than previous models had predicted, and there's evidence the aerosols came all the way from the other side of the Pacific Ocean."

These tiny airborne particles form clouds, cause precipitation and reduce air quality, yet they are the most poorly understood aspect of the climate system.

A smidge of soot at their core, aerosols are tiny balls of gases, pollutants, and other molecules that coalesce around the core. Many of the molecules that coat the core are what's known as "organics." They arise from living matter such as vegetation -- leaves and branches, for example, or even the molecule responsible for the pine smell that wafts from forests.

Other molecules such as pollutant PAHs also stick to the aerosol. Researchers long thought that PAHs could move freely within the organic coating of an aerosol. This ease of movement allowed the PAH to travel to the surface where ozone -- a common chemical in the atmosphere -- can break it down.

But scientists' understanding of aerosols has changed in the last five years or so.

Recent experiments led by PNNL coauthor Alla Zelenyuk show that, depending on the conditions, the aerosol coatings can actually be quite viscous. If the atmosphere is cool and dry, the coating can become as viscous as tar, trapping PAHs and other chemicals. By preventing their movement, the viscous coating shields the PAHs from degradation.

Airborne particles carry PAHs much farther when climate models include their tar-like nature (top) rather than without (bottom).

Researchers developed a new way of representing PAHs in a global climate model, and ran it to simulate PAH concentrations from 2008 to 2010. They examined one of the most carcinogenic PAHs in particular, called BaP. Simulations were compared to data from 69 rural sites and 294 urban sites worldwide, and showed that predictions from shielded PAHs were far more accurate than previous, unshielded ones.

Scientists also analyzed how far the protected PAHs could travel, using both old and new models. In all cases, the shielded PAHs traveled across oceans and continents, whereas in the previous version they barely moved from their country of origin.

To look at the impact globe-trotting PAHs might have on human health, Shrivastava combined a global climate model, running either the shielded PAH scenario or the previous unshielded one, with a lifetime cancer risk assessment model developed by coauthors Huizhong Shen and Shu Tao, both then at Peking University.

Globally, the previous model predicted half a cancer death out of every 100,000 people, which is half the limit outlined by the World Health Organization (WHO) for PAH exposure. But using the new model, which showed that shielded PAHs actually travel great distances, the global risk was four times that, or two cancer deaths per 100,000 people, which exceeds WHO standards.

The WHO standards were not exceeded everywhere. It was higher in China and India and lower in the United States and Western Europe. The extent of shielding was also much lower over the tropics compared to the mid- and high-latitudes. As the aerosols traversed the warm and humid tropics, ozone could get access to the PAHs and oxidize them.

"We don't know what implications more PAH oxidation products over the tropics have for future human or environmental health risk assessments," said Shrivastava. "We need to better understand how the shielding of PAHs varies with the complexity of aerosol composition, atmospheric chemical aging of aerosols, temperature and relative humidity. I was initially surprised to see so much oxidation over the tropics."