Scientists seeking an oceanic counterpart to the tree rings that document past weather patterns on land have found one in the subtropical waters of Dry Tortugas National Park near the Florida Keys, where long-lived boulder corals contain the chemical signals of past water temperatures. By analyzing coral samples, USGS researchers and their colleagues have found evidence that an important 60- to 85-year-long cycle of ocean warming and cooling has been taking place in the region as far back as the 1730s.

The cycle called the Atlantic Multidecadal Oscillation, or AMO, is linked to rainfall over most of the US, Midwestern droughts, hurricane intensification and landfalls, and the transfer of ocean heat from the tropical Caribbean Sea to the North Atlantic Ocean by way of the Gulf Stream. It interacts with ongoing climate change in poorly understood ways, and it is very hard to spot in pre-20th century records.

"The AMO has a huge impact on human populations and the economy, mainly through its influence on rainfall patterns," said geochemist Jennifer Flannery of the USGS Coastal and Marine Science Center in St. Petersburg, Florida, who led the study. "Climatologists suspect the AMO is a natural climate cycle that has existed for more than 1,000 years. But until recently most of the evidence came from ships at sea, and only went back 150 years or so.

Scientists used a core from this Massive Starlet (Siderastrea siderea) coral colony in Dry Tortugas National Park to reconstruct ocean temperatures going back to 1837, matching historic weather phenomena on the US mainland. 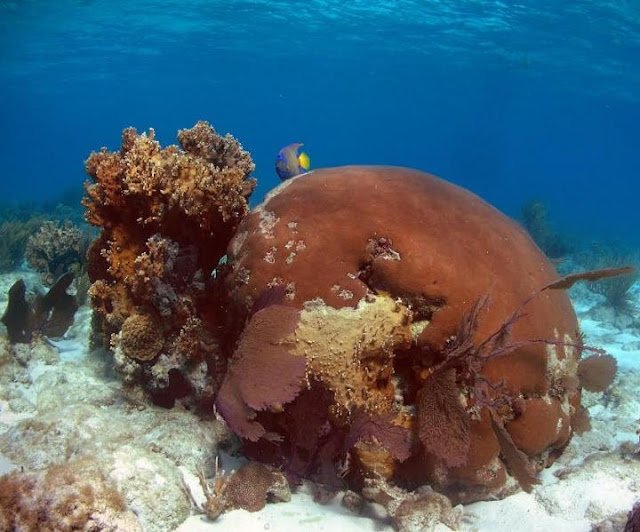 
"The record we obtained from the Dry Tortugas coral cores captures several complete AMO cycles stretching back 278 years. That gives climate modelers a lot of new evidence to work with as they try to understand past AMOs and predict future ones."

The Dry Tortugas samples precisely track major climate phenomena like the Little Ice Age that ended in the early 1800s, and the lethal Dust Bowl drought of the 1930s. A research paper about the study appeared January 15 in the journal Palaeogeography, Palaeoclimatology, Palaeoecology.

Dry Tortugas National Park is a cluster of small, isolated islands at an important marine crossroads: the Florida Straits, where the Gulf of Mexico and the Caribbean Sea flow into the Atlantic Ocean. The islands are within a large zone of seawater called the Atlantic Warm Pool, which typically heats up in spring to 83 degrees Fahrenheit (28.5 degrees Celsius) or more. The heat stored in the Atlantic Warm Pool appears to influence rainfall in the Caribbean and parts of North America, and the formation and intensity of hurricanes.

The Dry Tortugas also lie near the origin of the Gulf Stream, the current that carries warm seawater north to Greenland, where it chills, plunges deeper into the sea, and heads back towards the equator. Together, the northbound warm flow at the surface and the deep, cold southbound flow are known as the Atlantic Meridional Overturning Circulation or AMOC, which affects weather in the entire North Atlantic, including the US Atlantic seaboard and much of Europe.

Some parts of this circulation system have been known for centuries, but others, like the AMO, are relatively recent discoveries. Climatologists are eager to learn more about the AMO from a longer record of sea surface temperatures in this region where ocean-wide patterns take shape.

That's where the Dry Tortugas coral cores come in. Coral skeletons, like tree rings, have growth rings that preserve evidence of past weather conditions. While they are alive, corals take up strontium and calcium from seawater, depositing the two minerals in their skeletons in a ratio that varies with water temperature.

By measuring the strontium-to-calcium ratio in corals, scientists can reconstruct past sea surface temperatures. Working with two boulder corals cored by divers in 2008 and 2012, Flannery's team used a dentist's drill to collect and analyze samples at intervals as short as one month, going back as far as 1837. Combining these two corals' records with three other Dry Tortugas coral cores that stretch back to 1733, the team was able to track 278 years' worth of sea surface temperatures.

The Dry Tortugas corals show that after a cold spell during the 1960s, sea surface temperatures in the region have warmed by about 1 ½ degrees Fahrenheit (0.8 degrees Celsius) between 1970 and 2012. They also show two sets of oscillations in sea surface temperatures: a shorter cycle lasting 28 to 30 years, and a longer cycle of 80 to 90 years, consistent with the Atlantic Multidecadal Oscillation.

The coral cores reliably track these longer cycles of warming and cooling, providing confirmation that the Atlantic Multidecadal Oscillation has existed for the past three centuries, Flannery said. This suggests that there is a close connection between sea temperatures in the area around the Dry Tortugas and the larger AMO.

"By looking at sea surface temperatures in the Dry Tortugas, climatologists may be able to predict imminent changes that will affect the entire North Atlantic basin," Flannery said.