Researchers headed by IRB Barcelona combine genetic engineering, super-resolution microscopy and biocomputation to allow them to see in 3D the protein machinery inside living cells

Published in the journal Cell, the study unveils key functional features of an assembly of proteins that is vital for animals and plants.

Today scientists at the Institute for Research in Biomedicine (IRB Barcelona) present a study in Cell where they have been able to observe protein nanomachines (also called protein complexes)—the structures responsible for performing cell functions—for the first time in living cells and in 3D. This work has been done in collaboration with researchers at the University of Geneva in Switzerland and the Centro Andaluz de Biología del Desarrollo in Seville.

On the left, in vivo image of nanomachines using current microscopy techniques; on the right, the new method allows 3D observation of nanomachines in vivo and provides 25-fold improvement in precision

Currently, biologists who study the function of protein nanomachines isolate these complexes in test tubes, divorced from the cell, and then apply in vitro techniques that allow them to observe their structure up to the atomic level. Alternatively, they use techniques that allow the analysis of these complexes within the living cell but that give little structural information. In this study, the scientists have managed to directly observe the structure of the protein machinery in living cells while it is executing its function.

"The in vitro techniques available are excellent and allow us to make observations at the atomic level, but the information provided is limited. We will not know how an engine works if we dissemble it and only look at the individual parts. We need to see the engine assembled in the car and running. In biology, we still do not have the tools to observe the inner workings of a living cell, but the technique that we have developed is a step in the right direction and we can now see, in 3D, how the protein complexes carry out their functions,” explains Oriol Gallego, IRB Barcelona researcher and coordinator of the group that undertook this study, which also involved PhD student Irene Pazos.

Watching the nanometric machinery at work

The new strategy brings together methods from super-resolution microscopy—a discovery that was recognised with the 2014 Nobel Prize in Chemistry—, cell engineering, and computational modelling. The technology allows us to observe protein complexes with a precision of 5 nm*, a resolution "four times better than that offered by super-resolution and that allows us to perform cell biology studies that were previously unfeasible," explains Gallego. (*a nm is a millionth part of a mm. A hair has a width of 100,000 nm)

Model of the architecture of the main machinery involved in exocytosis. The eight proteins, each shown in a different color, are bound, forming the nanomachine or protein complex. 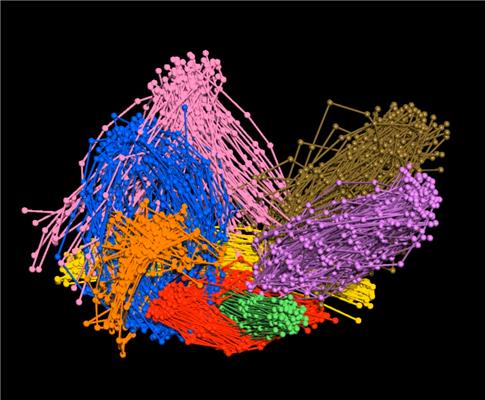 The researchers genetically modify cells in order to build artificial supports inside onto which they can anchor protein complexes. These supports are designed in such a way as to allow them to regulate the angle from which the immobilized nanomachinery is viewed. After, in order to determine the 3D structure of the protein complex, they use super-resolution techniques to measure the distances between different components and then integrate them in a process similar to that used by GPS.

Gallego has used this method to study exocytosis, a mechanism that the cell uses to communicate with the cell exterior. For instance, neurons communicate with each other by releasing neurotransmitters via exocytosis. The study has allowed the scientists to reveal the entire structure of a key nanomachine in exocytosis and that until now was an enigma. "We now know how this machinery, which is formed by eight proteins, works and what each protein is important for. This knowledge will help us to better understand the involvement of exocytosis in cancer and metastasis—processes in which this nanomachinery is altered," he explains.

An understanding of how nanomachines carry out their cell functions has biomedical implications since alterations in the inner workings can lead to the development of diseases. With this new strategy in hand, it will be possible to study cellular protein machinery in health and in disease. For example, it would be possible to see how viruses and bacteria use protein nanomachines during infection, and to better understand the defects in complexes that lead to diseases in order to design new therapeutic strategies that reverse them. 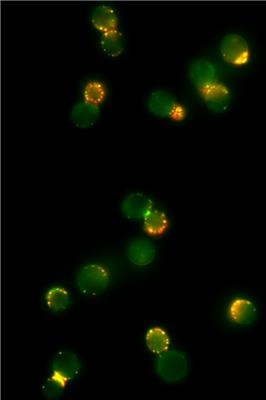 The technique can be used on relatively large complexes. "Being able to see protein complexes measuring 5 nm is a great achievement, but there is still a long way to go to be able to observe the inside of the cell at the atomic scale that in vitro techniques would allow," says Gallego. "But", he continues, "I think that the future lies in integrating various methods and combining the power of each one".

Over five years, Oriol Gallego has developed this project in the Molecular Medicine Programme at IRB Barcelona through a Ramón y Cajal researcher contract awarded by the Ministry of Economy and Competitiveness and that will be ending soon. Gallego has already lined up two research placements, in Japan and Germany, to learn more about integrating microscopy techniques. "After, I would like to continue to do top-level research in Barcelona, and I hope that this study that has been published in Cell helps me to do so," comments the young researcher, whose focus lies in protein complex biology and in developing the technology that "makes the invisible visible".

Contacts and sources:
Institute for Research in Biomedicine-IRB