An international science team says NASA's Fermi Gamma-ray Space Telescope has observed high-energy light from solar eruptions located on the far side of the sun, which should block direct light from these events. This apparent paradox is providing solar scientists with a unique tool for exploring how charged particles are accelerated to nearly the speed of light and move across the sun during solar flares.

"Fermi is seeing gamma rays from the side of the sun we're facing, but the emission is produced by streams of particles blasted out of solar flares on the far side of the sun," said Nicola Omodei, a researcher at Stanford University in California. "These particles must travel some 300,000 miles within about five minutes of the eruption to produce this light."

Omodei presented the findings on Monday, Jan. 30, at the American Physical Society meeting in Washington, and a paper describing the results will be published online in The Astrophysical Journal on Jan. 31.

Fermi has doubled the number of these rare events, called behind-the-limb flares, since it began scanning the sky in 2008. Its Large Area Telescope (LAT) has captured gamma rays with energies reaching 3 billion electron volts, some 30 times greater than the most energetic light previously associated with these "hidden" flares.

Thanks to NASA's Solar Terrestrial Relations Observatory (STEREO) spacecraft, which were monitoring the solar far side when the eruptions occurred, the Fermi events mark the first time scientists have direct imaging of beyond-the-limb solar flares associated with high-energy gamma rays. 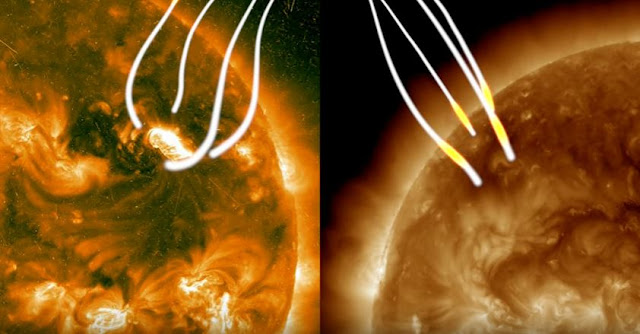 "Observations by Fermi's LAT continue to have a significant impact on the solar physics community in their own right, but the addition of STEREO observations provides extremely valuable information of how they mesh with the big picture of solar activity," said Melissa Pesce-Rollins, a researcher at the National Institute of Nuclear Physics in Pisa, Italy, and a co-author of the paper.

The hidden flares occurred Oct. 11, 2013, and Jan. 6 and Sept. 1, 2014. All three events were associated with fast coronal mass ejections (CMEs), where billion-ton clouds of solar plasma were launched into space. The CME from the most recent event was moving at nearly 5 million miles an hour as it left the sun. Researchers suspect particles accelerated at the leading edge of the CMEs were responsible for the gamma-ray emission.

These solar flares were imaged in extreme ultraviolet light by NASA's STEREO satellites, which at the time were viewing the side of the sun facing away from Earth. All three events launched fast coronal mass ejections (CMEs). Although NASA's Fermi Gamma-ray Space Telescope couldn't see the eruptions directly, it detected high-energy gamma rays from all of them. Scientists think particles accelerated by the CMEs rained onto the Earth-facing side of the sun and produced the gamma rays. The central image was returned by the STEREO A spacecraft, all others are from STEREO B.

Large magnetic field structures can connect the acceleration site with distant part of the solar surface. Because charged particles must remain attached to magnetic field lines, the research team thinks particles accelerated at the CME traveled to the sun's visible side along magnetic field lines connecting both locations. As the particles impacted the surface, they generated gamma-ray emission through a variety of processes. One prominent mechanism is thought to be proton collisions that result in a particle called a pion, which quickly decays into gamma rays.

In its first eight years, Fermi has detected high-energy emission from more than 40 solar flares. More than half of these are ranked as moderate, or M class, events. In 2012, Fermi caught the highest-energy emission ever detected from the sun during a powerful X-class flare, from which the LAT detected high­energy gamma rays for more than 20 record-setting hours.

Combined images from NASA's Solar Dynamics Observatory (center) and the NASA/ESA Solar and Heliospheric Observatory (red and blue) show an impressive coronal mass ejection departing the far side of the sun on Sept. 1, 2014. This massive cloud raced away at about 5 million mph and likely accelerated particles that later produced gamma rays Fermi detected. 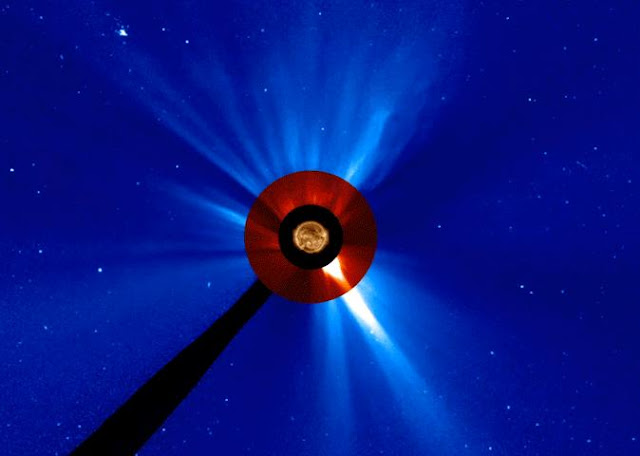