Earth is currently in what climatologists call an interglacial period, a warm pulse between long, cold ice ages when glaciers dominate our planet’s higher latitudes. For the past million years, these glacial-interglacial cycles have repeated roughly on a 100,000-year cycle. Now a team of Brown University researchers has a new explanation for that timing and why the cycle was different before a million years ago.

Using a set of computer simulations, the researchers show that two periodic variations in Earth’s orbit combine on a 100,000-year cycle to cause an expansion of sea ice in the Southern Hemisphere. Compared to open ocean waters, that ice reflects more of the sun’s rays back into space, substantially reducing the amount of solar energy the planet absorbs. As a result, global temperature cools.

“The 100,000-year pace of glacial-interglacial periods has been difficult to explain,” said Jung-Eun Lee, an assistant professor in Brown’s Department of Earth, Environmental and Planetary Studies and the study’s lead author. “What we were able to show is the importance of sea ice in the Southern Hemisphere along with orbital forcings in setting the pace for the glacial-interglacial cycle.”

The research is published in the journal Geophysical Research Letters.

In the 1930s, Serbian scientist Milutin Milankovitch identified three different recurring changes in Earth’s orbital pattern. Each of these Milankovitch Cycles can influence the amount of sunlight the planet receives, which in turn can influence climate. The changes cycle through every 100,000, 41,000 and 21,000 years.

The 21,000-year cycle deals with precession — the change in orientation of Earth’s tilted rotational axis, which creates Earth’s changing seasons. When the Northern Hemisphere is tilted toward the sun, it gets more sunlight and experiences summer. At the same time, the Southern Hemisphere is tilted away, so it gets less sunlight and experiences winter. But the direction that the axis points slowly changes — or precesses — with respect to Earth’s orbit. As a result, the position in the orbit where the seasons change migrates slightly from year to year. Earth’s orbit is elliptical, which means the distance between the planet and the sun changes depending on where we are in the orbital ellipse. So precession basically means that the seasons can occur when the planet is closest or farthest from the sun, or somewhere in between, which alters the seasons’ intensity. 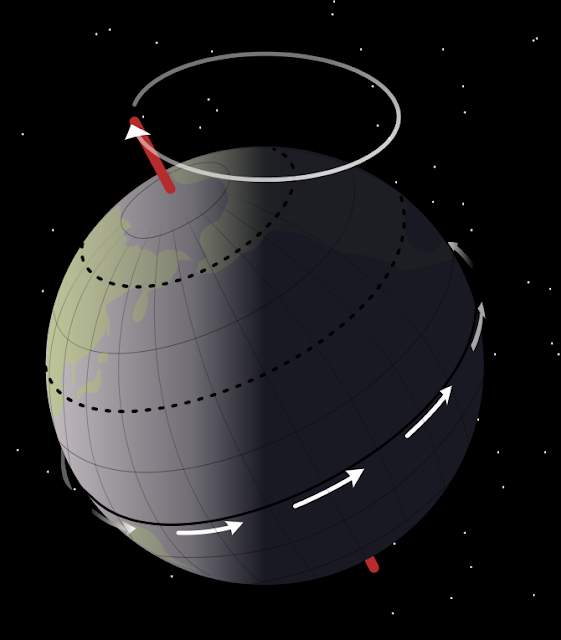 In terms of average global temperature, one might not expect precession to matter much. Whichever hemisphere is closer to the sun in its summer, the other hemisphere will be farther away during its summer, so the effects would just wash themselves out. However, this study shows that there can indeed be an effect on global temperature if there’s a difference in the way the two hemispheres absorb solar energy — which there is.

Lee’s climate models rely on the simple idea that sea ice reflects a significant amount of solar radiation back into space that would normally be absorbed into the ocean. That reflection of radiation can lower global temperature.

“What we show is that even if the total incoming energy is the same throughout the whole precession cycle, the amount of energy the Earth actually absorbs does change with precession,” Lee said. “The large Southern Hemispheric sea ice that forms when summers are cooler reduces the energy absorbed.”

The 100,000-year cycle deals with the eccentricity of Earth’s orbit — meaning the extent to which it deviates from a circle. Over a period of 100,000 years, the orbital shape goes from almost circular to more elongated and back again. It’s only when eccentricity is high — meaning the orbit is more elliptical — that there’s a significant difference between the Earth’s furthest point from the sun and its closest. As a result, there’s only a large difference in the intensity of seasons due to precession when eccentricity is large.

Lee’s models show that, aided by high eccentricity, cool Southern Hemisphere summers can decrease by as much as 17 percent the amount of summer solar radiation absorbed by the planet over the latitude where the difference in sea ice distribution is largest — enough to cause significant global cooling and potentially creating the right conditions for an ice age.

Aside from radiation reflection, there may be additional cooling feedbacks started by an increase in southern sea ice, Lee and her colleagues say. Much of the carbon dioxide — a key greenhouse gas — exhaled into the atmosphere from the oceans comes from the southern polar region. If that region is largely covered in ice, it may hold that carbon dioxide in like a cap on a soda bottle. In addition, energy normally flows from the ocean to warm the atmosphere in winter as well, but sea ice insulates and reduces this exchange. So having less carbon and less energy transferred between the atmosphere and the ocean add to the cooling effect.

The findings may also help explain a puzzling shift in the Earth’s glacial cycle. For the past million years or so, the 100,000-year glacial cycle has been the most prominent. But before a million years ago, paleoclimate data suggest that pace of the glacial cycle was closer to about 40,000 years. That suggests that the third Milankovitch Cycle, which repeats every 41,000 years, was dominant then.

While the precession cycle deals with which direction the Earth’s axis is pointing, the 41,000-year cycle deals with how much the axis is tilted. The tilt — or obliquity — changes from a minimum of about 22 degrees to a maximum of around 25 degrees. (It’s at 23 degrees at the moment.) When obliquity is higher, each of the poles gets more sunlight, which tends to warm the planet. 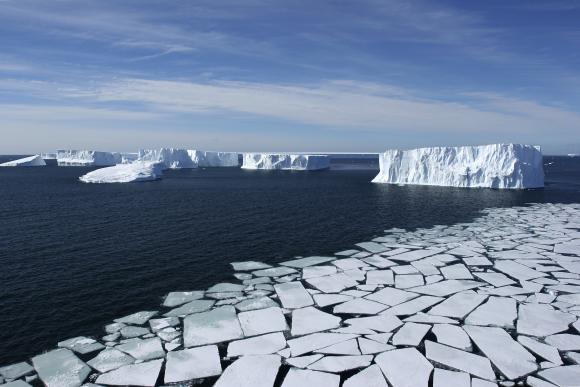 So why would the obliquity cycle be the most important one before a million years ago, but become less important more recently?

According to Lee’s models, it has to do with the fact that the planet has been generally cooler over the past million years than it was prior to that. The models show that, when the Earth was generally warmer than today, precession-related sea ice expansion in the Southern Hemisphere is less likely to occur. That allows the obliquity cycle to dominate the global temperature signature. After a million years ago, when Earth became a bit cooler on average, the obliquity signal starts to take a back seat to the precession/eccentricity signal.

Lee and her colleagues believe their models present a strong new explanation for the history of Earth’s glacial cycle — explaining both the more recent pace and the puzzling transition a million years ago.

As for the future of the glacial cycle, that remains unclear, Lee says. It’s difficult at this point to predict how human contributions to Earth’s greenhouse gas concentrations might alter the future of Earth’s ice ages.

Lee’s co-authors were Aaron Shen and Baylor Fox-Kemper from Brown and Yi Ming of the Geophysical Fluid Dynamics Laboratory, National Oceanic and Atmospheric Administration. The work was supported by the National Science Foundation (NSF).