The smallest aerial drones mimic insects in many ways, but none can match the efficiency and maneuverability of the dragonfly. Now, engineers at Draper are creating a new kind of hybrid drone by combining miniaturized navigation, synthetic biology and neurotechnology to guide dragonfly insects. The system looks like a backpack for a dragonfly.

DragonflEye, an internal research and development project at Draper, is already showing promise as a way to guide the flightpath of dragonflies. Potential applications of the technologies underpinning DragonflEye include guided pollination, payload delivery, reconnaissance and even precision medicine and diagnostics.

“DragonflEye is a totally new kind of micro-aerial vehicle that’s smaller, lighter and stealthier than anything else that’s manmade,” said Jesse J. Wheeler, biomedical engineer at Draper and principal investigator on the program. “This system pushes the boundaries of energy harvesting, motion sensing, algorithms, miniaturization and optogenetics, all in a system small enough for an insect to wear.”

A first generation backpack guidance system that includes energy harvesting, navigation & optical stimulation on a to-scale model of a dragonfly 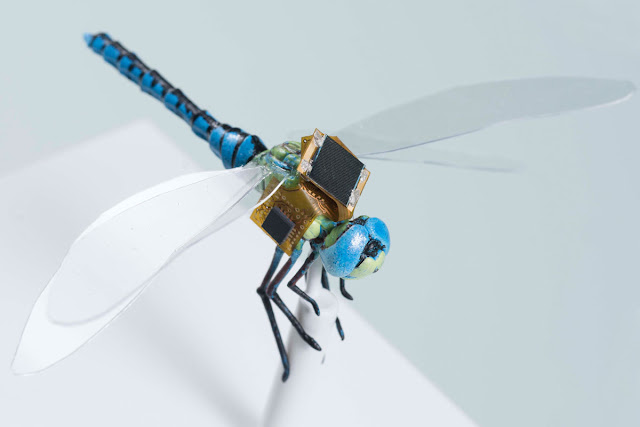 DragonflEye has been a team effort between Draper and Howard Hughes Medical Institute (HHMI) at Janelia Research Campus to create new optogenetic tools that send guidance commands from the backpack to special “steering” neurons inside the dragonfly nerve cord.

Research at HHMI—led by Anthony Leonardo, Janelia Research Campus group leader—has led to a deeper understanding of “steering” neurons in the nervous system of the dragonfly that control flight. HHMI is applying techniques in synthetic biology to make these “steering” neurons sensitive to light by inserting genes similar to those naturally found in the eye.

Draper is developing tiny optical structures, called optrodes, that can activate the special “steering” neurons with pulses of light piped into the nerve cord from the dragonfly’s backpack. Traditional optical fibers are too stiff to be wrapped around the tiny dragonfly nerve cord, so Draper developed innovative flexible optrodes that can bend light around sub-millimeter turns. These optrodes will enable precise and targeted neural activation without disrupting the thousands of nearby neurons. 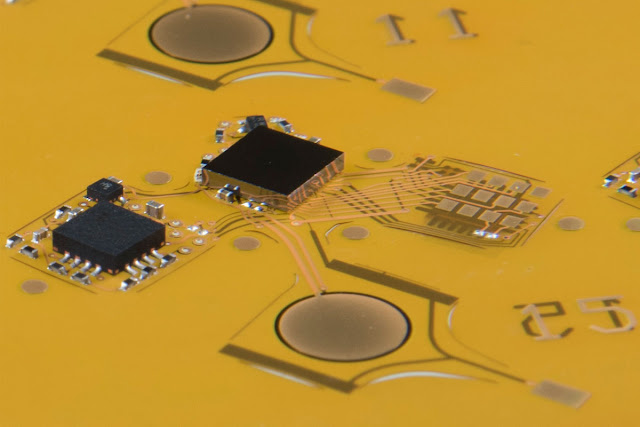 DragonflEye provides opportunities to put technology on some of nature’s most agile insects. For instance, honeybees, whose population has collapsed by half in the last 25 years, could be equipped with Draper’s technology to assist with pollination. One of nature’s greatest pollinators, honeybees contribute more than $15 billion to the value of U.S. agriculture every year. Draper’s tiny guidance system could help stem the loss of pollinators by monitoring their flight patterns, migration and overall health.