Within the next fifty years, scientists at BAE Systems believe that battlefield commanders could deploy a new type of directed energy laser and lens system, called a Laser Developed Atmospheric Lens which is capable of enhancing commanders’ ability to observe adversaries’ activities over much greater distances than existing sensors.


At the same time, the lens could be used as a form of ‘deflector shield’ to protect friendly aircraft, ships, land vehicles and troops from incoming attacks by high power laser weapons that could also become a reality in the same time period. 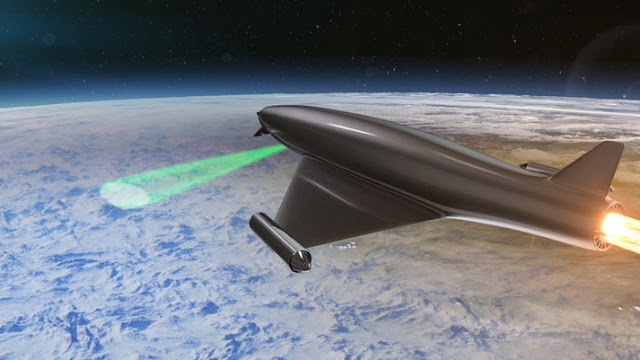 The Laser Developed Atmospheric Lens (LDAL) concept, developed by technologists at the Company’s military aircraft facility in Warton, Lancashire, has been evaluated by the Science and Technology Facilities Council (STFC) Rutherford Appleton Laboratory and specialist optical sensors company LumOptica and is based on known science. It works by simulating naturally occurring phenomena and temporarily - and reversibly - changes the Earth’s atmosphere into lens-like structures to magnify or change the path of electromagnetic waves such as light and radio signals.

LDAL is a complex and innovative concept that copies two existing effects in nature; the reflective properties of the ionosphere and desert mirages. The ionosphere occurs at a very high altitude and is a naturally occurring layer of the Earth’s atmosphere which can be reflective to radio waves – for example it results in listeners being able to tune in to radio stations that are many thousands of miles away. The radio signals bounce off the ionosphere allowing them to travel very long distances through the air and over the Earth’s surface. The desert mirage provides the illusion of a distant lake in the hot desert. This is because the light from the blue sky is ‘bent’ or refracted by the hot air near the surface and into the vision of the person looking into the distance.

LDAL simulates both of these effects by using a high pulsed power laser system and exploiting a physics phenomena called the ‘Kerr Effect’ to temporarily ionise or heat a small region of atmosphere in a structured way. Mirrors, glass lenses, and structures like Fresnel zone plates could all be replicated using the atmosphere, allowing the physics of refraction, reflection, and diffraction to be exploited.

“Working with some of the best scientific minds in the UK, we’re able to incorporate emerging and disruptive technologies and evolve the landscape of potential military technologies in ways that, five or ten years ago, many would never have dreamed possible,” said Professor Nick Colosimo, BAE Systems’ Futurist and Technologist.

Professor Bryan Edwards, Leader of STFC’s Defence, Security and Resilience Futures Programme said of the work: “For this evaluation project, STFC’s Central Laser Facility team worked closely with colleagues at BAE Systems and by harnessing our collective expertise and capabilities we have been able to identify new ways in which cutting edge technology, and our understanding of fundamental physical processes and phenomena, has the potential to contribute to enhancing the safety and security of the UK.”

Craig Stacey, CEO at LumOptica added: “This is a tremendously exciting time in laser physics. Emerging technologies will allow us to enter new scientific territories and explore ever new applications. We are delighted to be working with BAE Systems on the application of such game-changing technologies, evaluating concepts which are approaching the limits of what is physically possible and what might be achieved in the future.”

BAE Systems has developed some of the world’s most innovative technologies and invests in research and development to generate future products and capabilities. The Company has a portfolio of patents and patent applications covering approximately 2000 inventions internationally. Earlier this year, the Company unveiled two other futuristic technology concepts, including envisaging that small Unmanned Air Vehicles (UAVs) bespoke to specific military operations, could be 'grown' in large-scale labs through chemistry and that armed forces of the future could be using rapid response aircraft equipped with engines capable of propelling those aircraft to hypersonic speeds to meet rapidly emerging threats.