The more teenagers delay smoking marijuana until they're older, the better it is for their brains, but there may be little ill effect if they start after age 17, says a new Université de Montréal study.

Adolescents who smoke pot as early as 14 do worse by 20 on some cognitive tests and drop out of school at a higher rate than non-smokers, confirms the study, published Dec. 29 in Development and Psychopathology, a Cambridge University Press journal.

"Overall, these results suggest that, in addition to academic failure, fundamental life skills necessary for problem-solving and daily adaptation [...] may be affected by early cannabis exposure," the study says.

However, the cognitive declines associated with cannabis do not seem to be global or widespread, cautioned the study's lead author, Natalie Castellanos-Ryan, an assistant professor at UdeM's School of Psychoeducation. 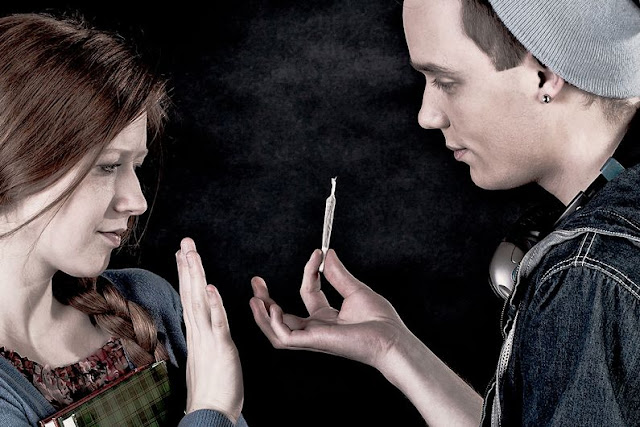 Her study found links between cannabis use and brain impairment only in the areas of verbal IQ and specific cognitive abilities related to frontal parts of the brain, particularly those that require learning by trial-and-error.

In addition, if teenagers hold off until age 17 before smoking their first joint, those impairments are no longer discernible. "We found that adolescents who started using cannabis at 17 or older performed equally well as adolescents who did not use cannabis," said Castellanos-Ryan.

In the study, she and her team of researchers at UdeM and CHU Saint-Justine, the university's affiliated children's hospital, looked at 294 teenagers who were part of the Montreal Longitudinal and Experimental Study, a well-known cohort of 1,037 white French-speaking males from some of the city's poorer neighbourhoods. The teenagers completed a variety of cognitive tests at ages 13, 14 and 20 and filled out a questionnaire once a year from ages 13 to 17 and again at 20, between 1991 and 1998.

Roughly half – 43 per cent – reported smoking pot at some point during that time, most of them only a few times a year. At 20 years of age, 51 per cent said they still used the drug. In general, those who started early already had poor short-term memory and poor working memory (that is, the ability to store information such as a phone number long enough to use it, or follow an instruction shortly after it was given). Conversely, the early users also had good verbal skills and vocabulary; Castellanos-Ryan suggested one possible explanation: "It takes quite a lot of skills for a young adolescent to get hold of drugs; they're not easy-access.

She and her team found smoking cannabis during adolescence was only linked to later difficulties with verbal abilities and cognitive abilities of learning by trial-and-error, and those abilities declined faster in teens who started smoking early than teens who started smoking later. The early adopters also tended to drop out of school sooner, which helped explain the decrease in their verbal abilities. "The results of this study suggest that the effects of cannabis use on verbal intelligence are explained not by neurotoxic effects on the brain, but rather by a possible social mechanism: Adolescents who use cannabis are less likely to attend school and graduate, which may then have an impact on the opportunities to further develop verbal intelligence,” said Castellanos-Ryan.

Besides filling out questionnaires about their use of drugs and alcohol over the previous year, the boys participated in a number of tests to measure their cognitive development. For example, they were given words and numbers to remember and repeat in various configurations, were asked to learn new associations between various images, played a card game to gauge their response to winning or losing money, and, in a test of their vocabulary, had to name objects and describe similarities between words. In general, those who performed poorly in language tests and tests that required learning by trial-and-error, either to make associations between images or to detect a shift in the ratio of gains to losses during the card game, reported smoking pot in their young teens.

What should be the takeaway from the study?

"I think that we should focus on delaying onset (of marijuana use)," said Castellanos-Ryan, who next intends to study whether these results can be replicated in other samples of adolescents and to see if cannabis use is associated with other problems, such as drug abuse, later in life. Prevention is especially important now, she added, since marijuana is much more potent than it was in the 1990s, and because teenagers today have a more favourable attitude to its use, viewing marijuana as much less harmful than other recreational drugs.

"But it is important to stick to the evidence we have and not exaggerate the negatives of cannabis," she cautioned. "We can't tell children, 'If you smoke cannabis you're going to damage your brain massively and ruin your life.' We have to be realistic and say, 'We are finding evidence that there are some negative effects related to cannabis use, especially if you start early, and so, if you can hold off as long as you can – at least until you're 17 – then it's less likely there'll be an impact on your brain.'"