Climate Changes May Lead to More Poisonous Mercury in Plankton

Global warming is expected to increase runoff and input of organic matter to aquatic ecosystems in large regions of the Northern hemisphere including the Baltic Sea. Research performed in Sweden is now indicating a sevenfold increase in poisonous methylmercury in zooplankton as a consequence. This increase is due to an altered structure of the aquatic food web. The study has been published in the journal Science Advances.

"The study has revealed a phenomenon that has not been described before. The results are critical in the prediction of how global climate changes can affect the exposure of methylmercury to ecosystems, and humans," says Erik Björn, associate professor at Umeå University and leader of the research project.

Mercury is regarded as one of the top ten chemicals of public health concern according to the World Health Organization, WHO. The problems with mercury are mostly caused by methylmercury, an organometallic mercury compound that acts as a strong neurotoxin and that can be accumulated in the food webs of seas and lakes.

Erik Björn is injecting small amounts of isotopically enriched mercury to the sediments for the mesocosm experiment. By adding stable (not radioactive) isotopes of mercury the scientists could trace how methylmercury was formed and accumulated in plankton in the mesocosm systems. 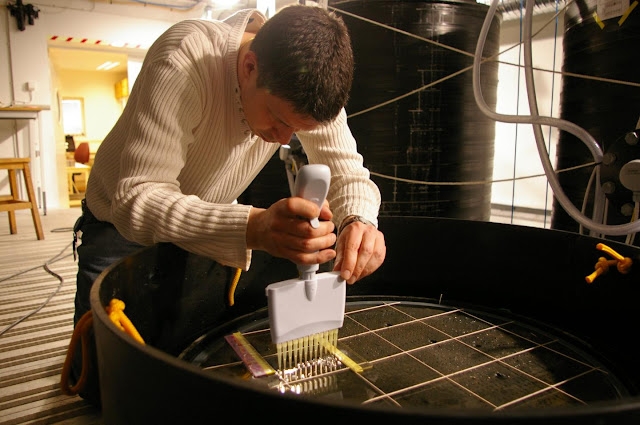 The content of methylmercury in fish and other living organisms is controlled both by the total content of mercury in the ecosystems and by complex chemical and ecological processes in the environment. Climate changes and land use are expected to affect these processes in several ways, for instance by input of organic matter, humic substances, from land through watercourses out to lakes and seas.

Erik Björn from Inhousebyrån on Vimeo.

Humic substances affect the aquatic environment in several ways - for instance by reducing the reach of sunlight into the water. That can lead to reductions in the production of phytoplankton via photosynthesis and instead favour growth of bacteria which can make use of humic substances for their growth. In turn, this can cause a trophic shift in the food web where it goes from being dominated by phytoplankton production (autotrophic) to being dominated by bacterial production (heterotrophic).

A heterotrophic food web generally has more levels of different organisms than an autotrophic food web, and the researchers' hypothesis was that this phenomenon would lead to an increased number of potential steps where methylmercury can be concentrated before reaching predators such as zooplankton and fish.

"Our study confirms this hypothesis and shows that an increase of 15-20 per cent of the content of organic matter in our waters can cause a shift from an autotrophic based to a heterotrophic based food web and lead to the content of methylmercury increasing two to sevenfold in zooplankton," says Erik Björn.

Erik Björn, associate professor at Umeå University, is collecting water samples from a tap mounted at the base of a 5 meter high mesocosm tank. 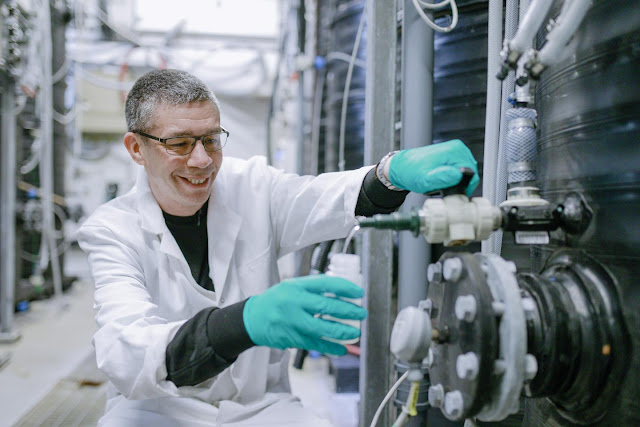 An increase in the content of organic matter by 15-20 per cent caused by increased precipitation and runoff is in accordance with climate change scenarios for large regions of the northern hemisphere, including the Baltic Sea region. The experiment also shows that the measured increase in methylmercury (two to sevenfold) is on a par with the estimated total increase (two to fivefold) of mercury in the ecosystems caused by human emissions during the entire industrial era from 1850 up until present time.

"The results emphasise the critical importance of including effects of changes to the food web in lakes and seas into models and risk assessments of mercury in a changing climate," says Erik Björn.

The study, which is a collaboration between researchers at Umeå University and the Swedish University of Agricultural Sciences, could be carried out thanks to access to the technologically advanced mesocosm facility at Umeå Marine Sciences Centre in northern Sweden. The mesocosms consist of water-filled tubes with temperature and light control, which enable large-scale experiments under well-controlled conditions.