Can the Donut-Shaped Magnet “CAPPuccino submarine” Hunt for Dark Matter?

Institute for Basic Science (IBS) scientists clarify that toroidal magnets can also look for axions, one of the particle candidates for the mysterious dark matter

Scientists at the Center for Axion and Precision Physics Research (CAPP), within the Institute for Basic Science (IBS) optimized some of the characteristics of the magnet to hunt for one possible component of dark matter called axion.

Although it sounds hard to believe, everything we see with our naked eyes or through microscopes and telescopes accounts for just 4% of the known Universe. The rest comprises dark energy (69%) and dark matter (27%). Although there seems to be more dark matter than visible matter in the Universe, we still have not been able to directly detect it. The reason is that dark matter does not emit light or absorb electromagnetic waves, so it is really hard to observe.

Artistic impression of the Milky Way galaxy with the mysterious dark matter halo shown in blue, but actually invisible. 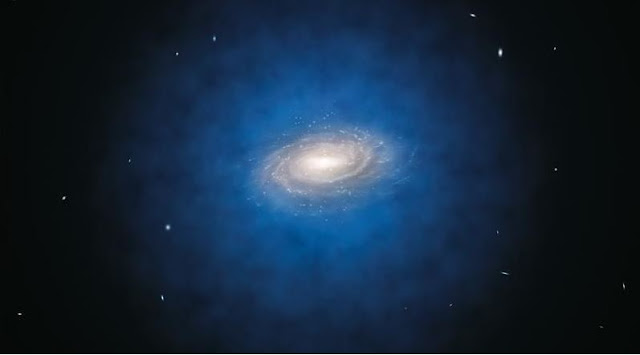 Interestingly, dark matter is needed to explain the motions of galaxies and some of the current theories of galaxy formation and evolution. For example, the galaxy that contains our solar system, the Milky Way, seems to be enveloped by a much larger halo of dark matter. Its halo is quite different from the one we draw behind angels; it is actually invisible, but its existence is inferred through its effects on the motions of stars and gases.

Although dark matter particles have not been detected so far, scientists know that these particles have a very small mass and are distributed throughout the Universe. One dark matter particle candidate is the axion. Axions have extremely weak interactions with matter and so scientists need special equipment to catch their presence. Specifically, scientists use the so-called axion to two-photons coupling technique, which takes advantage of the fact that an axion passing through a strong magnetic field can interact with a photon and convert into another photon. To record this interaction, IBS scientists are in the process of building haloscopes in Daejeon in South Korea.

Haloscopes contain resonant cavities immersed in extra-strong magnetic field. “In simple terms, you can image the resonant cavity as a cylinder, like a soft drink can, where the energy of the photons generated from the axions-photons interaction is amplified,” explains KO Byeong Rok, first author of this study.

The magnets used for these types of experiments so far have the shape of a coil wound into a helix, technically known as a solenoid. However, depending on the height of the magnet, there is the risk of losing the signal coming from the axion-photon interaction. For this reason, IBS scientists decided to look deeper into another type of magnets shaped like donuts, called toroidal magnets.

“Magnets are the most important feature of the haloscope, and also the most expensive. While other experiments seeking to detect dark matter around the world use solenoid magnets, we are the first to try to use toroidal magnets. Since it has never been used before, you cannot easily buy the equipment, so we develop it ourselves,” explains Professor Ko. 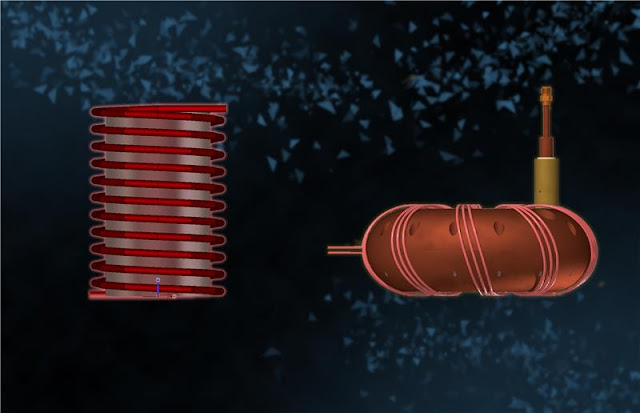 In order to hunt the axion, scientists need to get out in front of it, and predict the magnitude of the electromagnetic energy expected from the axion-to-photon conversion. Electromagnetic energy is due to the sum of electric and magnetic energies. Both of them can be easily calculated for a solenoid magnet, but if the magnet is toroidal shaped, it is practically impossible to calculate the magnetic energy analytically. Because of this, it was believed that toroidal magnets could not be used for the haloscope.

Another finding is that the energy emitted from the interaction and conversion of the axion to photon is independent from the position of the cavity inside a solenoid magnet. However, this is not the case for toroid magnets.

IBS CAPP scientists have nicknamed the toroidal cavity “CAPPuccino submarine” because its color resembles the beverage, and its particular shape. All the theoretical findings published in this paper are going to form a solid background for the development and prototyping of new machines for the search of dark matter.